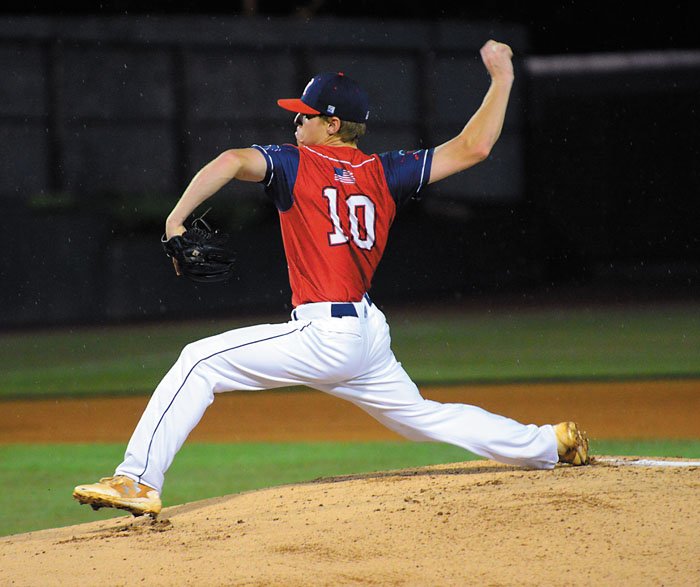 The right-handed pitcher threw 6 1/3 innings of precise patterns and his teammates sprayed line drives to all corners of Newman Park in a 13-3 non-league victory over Stanly County.

“I just knew I had to get us out of this,” Owen said, moments after Rowan (10-2) snapped its two-game losing streak. “We weren’t in the best of moods when we got here.”

Who could blame them? Rowan was essentially pied in the face a night earlier when it surrendered five seventh-inning runs — three on the game’s final pitch — and suffered a soul-crushing loss at Davie County. Compounding matters was an administrative error that indicated it wasn’t a Southern Division game, when in fact it was.

“I don’t know if our mood was bad, but we seemed a little more focused on winning tonight,” said coach Jim Gantt. “What we did here was huge. You don’t ever want to extend a losing streak. With John Owen out there you gotta like your chances.”

Owen (3-0) struck out six, allowed two earned runs and induced nine groundouts in a sturdy 102-pitch effort. He was ably supported by right-fielder Luke Barringer (3 doubles) and third-baseman Trevor Atwood (4-for-4) as Rowan collected 13 hits — including five that went for extra bases.

“It’s always good to come out and get 13 hits,” said Barringer, who doubled twice against losing pitcher Ryan Baucom and later off reliever Cody Kidd. “I don’t know what my average is, but I’m not keeping track. That’s what messed me up in school ball.”

Baucom lasted only 2 1/3 innings and yielded five runs on seven hits. He had a meandering fastball and a curve that wouldn’t cooperate.

“No command,” Stanly coach Jordan Sells explained after Post 76 dropped to 5-9 overall. “When you can’t locate your breaking stuff, hitters can wait for you to throw the fastball. He struggled with that right from the start.”

Rowan jumped ahead 3-0 in the last of the first on run-scoring hits by Barringer and Chandler Lippard. Slugger Wayne Mize delivered another with a sacrifice fly. Two innings later Atwood, Mize and Barringer packaged consecutive hits as Rowan scored two more runs and chased Baucom.

“It makes it a whole lot easier when you can sit on the fastball,” said Barringer. “It changes your pitch selection. For me, it just slowed the game down.”

Stanly drew as close as 5-3 on Kidd’s two-run homer in the top of the fourth and Clay Pinion’s run-scoring dribbler in front of the plate an inning later. Rowan cracked the game open when it batted around and scored five times against relievers Jamie Thomas and A.D. McRae in the fifth inning. Key hits were provided by Matthew Mathis — who doubled down the left-field line — and Atwood, who grounded a two-out, two-single to left that made it 9-3. “All I know is I’m having fun out here,” he said with a post-game smile.

The defensive play-of-the-game came in the Stanly sixth, when Kidd smashed a leadoff line drive into the right-field corner that had two bases written all over it. As the ball rattled off an iron railing and some brick steps, Barringer retrieved it and rifled an on-the-fly peg to Atwood at third base, who deftly sold the play to Kidd and nailed him stretching for a triple.

“It hit the gate and bounced right to (Barringer),” said Atwood, a catcher by trade who made his first start at third base. “I knew it would be a close play right out of his hand.”

“That was a big throw,” noted Sells. “You don’t see that every day.”

“When the gate stopped it, I thought it would be a triple for sure,” Gantt said. “But Luke played the carom and instead of hitting the cutoff man, he threw it all the way to third. He put it right on the money.”

Owen’s night was finished after Stanly put a runner on first base with one out in the seventh. “Basically, I was just trying to keep the ball low and get a lot of grounders,” he said. “That’s my style of pitching.”

NOTES: Rowan enjoys an off-day today before hosting High Point in a non-league game on Sunday. … Atwood and second-baseman Mathis each had three assists — on a day when neither team took infield practice.