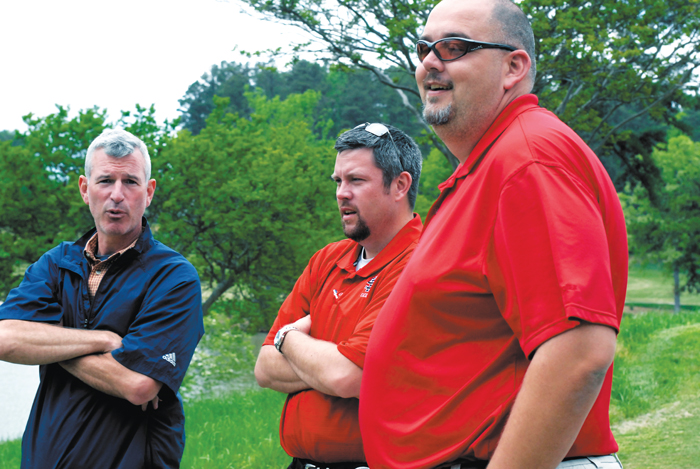 GRANITE QUARRY — There is an old joke that all you have to do to be a good golf coach is to be able to drive the bus. Just don’t tell that to East Rowan head coach Rhett Teems, the Rowan County boys golf Coach of the Year.

The veteran Mustang coach will be the first to tell you he has been blessed with great players, especially in recent seasons, but the job entails so much more than just getting them to a match.

“If you do your job right, you are working for your team all the time,” he says. “That involves everything from fund-raising to getting all of these tournaments they play in set up — and just working with all the different personalities on the team to bring them together as a unit.”

“We really met most of our goals this year,” Teems said. “It is like I told the boys: ‘You all got to play on the last day of the season and you can’t ask for more than that.’ Your goal is just to have a shot and that is what we wanted.”

Teems is wrapping up his 13th season at East Rowan as a social studies and history teacher, as well as coach of the boys and girls golf teams. His career dates back to 1996 when he was an assistant golf coach at Providence High in Charlotte. He then spent a number of years in Stanly County at New London Middle School and North Stanly High, before coming to East in 2005.

“When I came to East, we had a really good team with the Miller boys, Matt and Ben, Aaron Mothershead and a few others,” he recalled. “Then, we went through a little dry spell where I had to go recruit in the halls and the local golf courses.”

Then Teems saw his team hit a string of remarkable success with the arrival of Logan Shuping (East Carolina), Nick Lyerly (UNC Greensboro and NC Amateur Champion), followed by Bryson Sprinkle, William Garland and Austin Miller. It has been a remarkable run of talent.

Winning the Coach of the Year honor four times for boys and another two as girls coach is very satisfying to him. “It absolutely means a lot to me,” he says. “It says that people recognize your hard work, plus it is fun. But recognition is a good thing.”

As for this year’s Mustang squad, Teems was proud of the effort individually and as a team. “My players were great this year,” he says. “They really exceeded expectations and performed well each and every week.”

One valuable service Teems performs, not just for his team but for the conference as well, is compiling all the scores and statistics for all conference matches. Using a spreadsheet program he adapted, he provides valuable statistical data to all the teams as well as to the media. Teems also organizes and runs the annual conference tournament and the Rowan County tournament.

“Every year, we get one or two new coaches in the league or the county who don’t necessarily know how to organize and run a tournament,” he says, “So it is good to have somebody around who knows how to do it. Plus, I enjoy doing that.”

With all of his success as a golf coach, Teems is not a competitive golfer but enjoys playing for fun every now and then. He does play in a number of the charity tournaments each year. “But I know the game and understand it,” he says. “I have enjoyed golf my whole life and my Dad will tell you that the first words I ever said were Arnold Palmer. So I really love golf.”

Teems plans to continue his coaching for the next few years, but he is closing in on retirement eligibility.

So what then? “I will just go find something else fun to do,” he said.