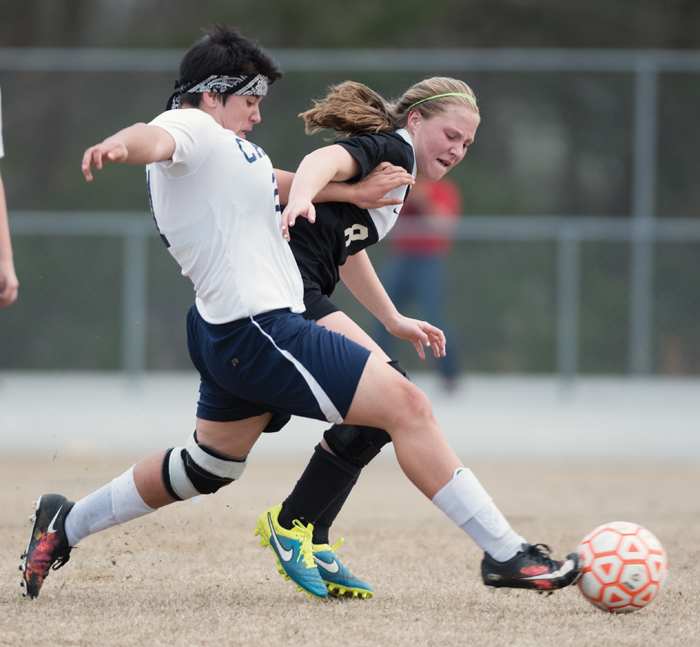 ALLISON LEE ISLEY FILE HOTO/SALISBURY POST... Carson’s Montana Gurganious, left, battles Salisbury’s Julia Honeycutt (8) for the ball during a 2016 match in China Grove. Gurganious has announced that she will continue her education and soccer career at Catawba College.

She played jayvee football — yes, football — for the Cougars, and she wasn’t a place-kicker. She was an outside linebacker.

“I really liked hitting people,” Gurganious said. “I made some plays, but I didn’t get to play as much as I would have liked.”

Her main sport, for some time, has been soccer. She signed last week with Catawba College. She’s headed to Catawba as a goalkeeper, but she’s quick enough that she can play in the field if goalkeeping doesn’t work out.

“I’m always working hard at it because I love the game of soccer,” Gurganious said. “I believe goalkeeper is my best position.”

Gurganious was born in Michigan but raised in North Carolina. She had never played soccer until China Grove Middle School coach (and Carson assistant) Ellen Howard asked her to try out for the team in the seventh grade.

“So I did,” Gurganious said. “Coach Howard put me at goalkeeper that first year. Then in the eighth grade, I moved from goalkeeper to defender.”

As a freshman, Gurganious quickly found a home on the Carson team at left back and enjoyed playing in front of a top-notch, all-county goalkeeper — Megan Bolick.

“Montana is such an athletic player overall that I think she could play any sport that she wanted to,” Carson head coach Lauren West said. “She was probably the fastest player we had and she gave us a great presence on defense.”

Gurganious might have spent the rest of her high school career at left back, but disaster struck the Cougars in an early-season game against Robinson in March, 2017. Maren Shumaker, Gurganious’ classmate was playing goalie, and she tried to make a sliding save. A Robinson girl also was sliding, and they collided. Shumaker suffered a severe injury, a dislocated finger that would cost her the rest of that season.

“Maren was our starting keeper, but the backup plan was that if anything ever happened to her, then we would try Montana there,” West said. “That was the night Montana became our goalkeeper.”

The rest of that match was a blur for Gurganious. She doesn’t remember much about it. The record book says Robinson won, 6-0.

Gurganious enjoyed playing left back, loved using her wheels to thwart attackers and chase balls down from sideline to sideline, so she wasn’t initially excited about the move to goalkeeper, where the action happens sporadically, and sometimes doesn’t happen at all. There were a few nights against the weaker teams when Gurganious just stood there, arms folded, looking bored to death. It almost drove her crazy.

“I was totally against playing goalkeeper at first,” Gurganious said with a laugh. “And for a while, things were a total mess.”

There were some rough nights for the Cougars in the spring of 2017. They were playing in the South Piedmont Conference then, taking on strong programs such as Cox Mill and Hickory Ridge. Carson struggled to a 7-11 record in the SPC, but Gurganious gradually adapted to her new role.

“After a few games, I got the jitters out,” she said. “It was an adjustment, but the team really needed me to do it, and I made up my mind to be the best that I could be.”

There were 9-0 losses (that’s the mercy rule) against Cox Mill and Hickory Ridge in late April, but Gurganious was impressing people.

“Against those really good teams, she might have made 30 saves,” West said. “She was making saves like we’d never seen anyone make before. She definitely played her best against the best teams. She got a feel for playing keeper, and she was a huge asset for us.”

How far Gurganious had come in less than two months showed up in Carson’s final game of 2017.  Carson played Robinson for the second time. This time the Cougars lost, 2-1, in overtime.

Gurganious was one of three Cougars named to the All-Rowan County first team.

“She made some saves that were amazing,” teammate Hannah Smith said. “You wonder how anyone could do that. She’s just so agile, so quick.”

With Carson moving to the North Piedmont Conference for the 2018 season, West had decisions to make regarding her two senior goalies. She opted to keep Gurganious at keeper, with a healthy Shumaker serving as her backup.

“There were some games where we were able to play both of them, to use Montana in the field and Maren at keeper,” West said. “But Montana was our keeper most of the time. She’s so good back there that we knew we weren’t going to have a lot of issues  on defense. We were able to focus this year on building our offense.”

That strategy worked. Carson had a nice, bounce-back season — 12-7 overall and 7-3 in the NPC to tie for second place. Carson outscored opponents, 91-33. The Cougars didn’t play Salisbury, but they won all five of their county games, shutting out East Rowan and West Rowan twice each and registering a 6-2 win against a good South Rowan team.

“The most fun games for me this year were against (NPC champ) South Iredell and North Iredell,” Gurganious said. “Those were fast-paced games with a lot of shots on goal.”

Carson had four prolific scorers this year —Gracie Thomason (25 goals), Smith (20), Sarah Musselwhite (16)  and freshman Lani Isley (13). They were Carson’s first team all-county players, while Gurganious wound up on the second team. But West says her senior season  was even better than her junior season.

Now she heads to Catawba, where coach Nick Brown’s Indians (7-10 last season) will be cranking up their season at Frock Field in just a few months.

Gurganious plans to pursue a degree in administration of justice, a diploma that would qualify her for supervisory and management positions in law enforcement, court operations and other fields.

“My mother serves in the Air Force, my grandfather was in the military, my uncle is a police officer, and my dad has taken fire-fighting training,” Gurganious said. “I want to be able to give something back to the community the way they have. I’d like to have a career where I can keep people safe.”