Larry Efird: Reflections on a school year – knowing what to erase 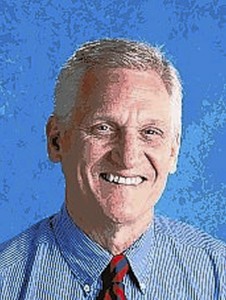 It’s happened once again. Another school year has come to a close. Speaking as a person who has gone through these endings many, many, times, one thing has remained constant for the past four decades: deciding what to remember — and what to erase — from my memory of ten very hectic months.

A quote that I have found helpful throughout my years of teaching simply says, “When God erases, He is preparing to write.” Those words have helped me through several major life changes, but they have also helped me put each unique school year into perspective as well.

Some parts of any given school year I am more than happy to erase: the angry student getting in my face and screaming, “You are a stupid idiot!” — not once, but three times in succession; the mother who told me her child was not the type of student who would “bring me an apple” after I called her regarding his belligerent, profanity-laced diatribes directed at the entire class; and the seemingly redundant departmental meetings that often felt endless.

To remain healthy in this profession, I have to do exactly that: erase those thoughts from my mind. I choose rather to focus on the parent who recently stopped his car and got out while I was walking at 6:15 one morning to tell me how much he appreciated what his graduating daughter gained from my class; the senior who stood crying the last day of her high school career as she gave me her homemade gift of chocolate chip cookies and a small container on which she had written a quote by Charles Dickens; or the reality that amidst all those redundant meetings, our department did make some positive strides — and the meetings did end, eventually.

No one knows what teachers do exactly on a daily basis but teachers and administrators, I suppose, along with those saintly parent volunteers and substitutes who keep us buoyed up throughout the year. And then there are the support staff such as custodians, cafeteria workers and office personnel who keep things going and cheer us on because they understand what we’re trying to accomplish in our respective classrooms.

Each day of teaching can be as unpredictable as the education lottery. (That phrase continues to amuse — and annoy — me.) A few months ago, as I was making my cross-campus trek to the staff work room in order to sign in, I physically stumbled upon a fight between two young ladies. They were rolling around on the floor in a commons area, pulling each other’s hair. It wasn’t violent, but it was upsetting to see two students so angry and frustrated that they didn’t know how to address their personal problems without resorting to a physical altercation before the first bell had even rung. I also noticed that while I was trying to separate them, another student offered to help, while several onlookers pulled out their cell phones to record what was happening. I remember looking up at them and saying, “Really?” That’s an experience I’d like to erase.

On another occasion, during Teacher Appreciation Week, students made hundreds of small, pennant-shaped banners thanking individual teachers, placing them in the hallways for everyone to see. It was a simple gesture, but it sent an encouraging message to the entire faculty which meant more than those students could have ever imagined. That’s a moment I’d like to remember.

But with all of the thoughts and events of an entire school year flashing in my mind like the lights of the midway at a county fair, which ones will be remembered and which ones should I try to wipe away? Only time will tell, but one teacher maxim is, just as all school years come to a close, new ones will invariably begin.

Being a veteran teacher whose years are quickly running out, I sometimes wonder what memories will remain not just from this year, but from all of them. I don’t know the answer to that question, but I do know that whatever is yet to be “written” for me in any future semesters, I do have the freedom to focus upon the experiences which will help me write something eternal in the lives of my students.

… Letter: Granite fire chief can ignore critic I think the mayor was spot on … It is not the... read more