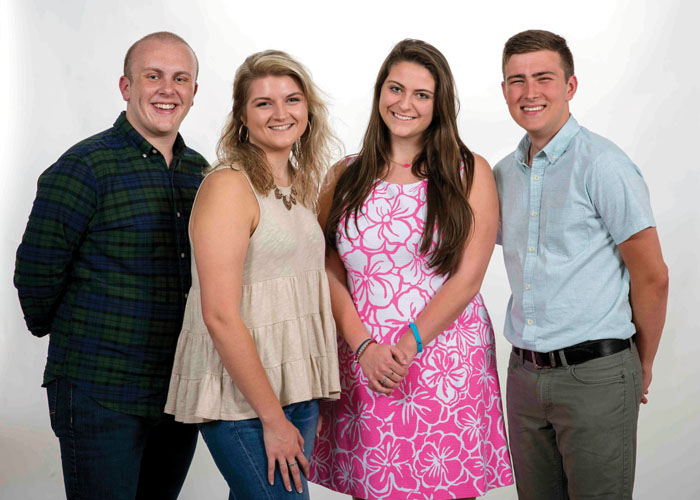 Carson Ray Sifford is the son of Richard and Amy Sifford of Rockwell. A senior at Jessie P. Carson High School, he attended Shive Elementary School and Erwin Middle School.

In the fall, he will attend the University of North Carolina at Chapel Hill, where he will study music and political science.

Favorite assigned book: “The Curious Incident of the Dog in the Night-Time” by Mark Haddon.

Secret to high school success: Stay focused and work hard in school, but also take time to pursue the things that interest you.

If I had $10 million: I would donate a large portion of it to various charities that focus on helping underrepresented groups. I would use the rest to take my family on an around-the-world trip.

Abigail Grace Cole is the daughter of Jeff and Kelly Cole of Rockwell.  A senior at Carson, Abigail attended Bostian and Shive Elementary Schools and China Grove Middle School. In the fall, she will attend Wake Forest University where she will study biology and medicine.

Defining moment in my life: When my grandfather passed away in 2014 from a heart disease called amyloidosis. This is what lead me to my career path and inspired me to work hard to get to where I am today.

Secret to high school success: I would say the secret to my success in high school has been pushing myself to do my best. I have always been intrinsically motivated and that has helped me greatly.

If I had $10 million: I would buy my parents a house at Cape Hatteras because that is something they have always wanted and I want to repay them for all that they have done for me. I would also give some of the money to my church as well as missionaries in order to help spread the word of God.

Tanner Grange Hawkins is the son of Bo and Joy Hawkins of Faith. A senior at Carson High School, Tanner attended Faith Elementary School and Southeast Middle School. In the fall, he will attend University of North Carolina at Chapel Hill, where he will study business.

Favorite assigned book: “Of Mice and Men,” by John Steinbeck.

Defining moment in my life: When I got into UNC because it had always been a dream of mine to attend that school.

Secret to high school success: I always stayed focused and gave 100 percent in every class. I wasn’t worried about the grade, I was only worried about if I did the best that I possibly could.

If I had $10 million: I would buy a teacup pig, name it The Great Hambino, and travel the world with it.

Favorite assigned book: “To Kill a Mockingbird,” by Harper Lee.

Defining moment in my life: The first time I visited the University of Alabama campus my freshman year, I knew exactly where I was meant to be and that Tuscaloosa was home.

Secret to high school success: It’s always a good idea to stay on top of things and try not to procrastinate because everything will eventually be due all at once and you will run out of free time.

If I had $10 million: I would buy a ton of land and save as many animals as I could from the shelters. Then I would donate the rest to rescue groups and supplies for homeless pets.