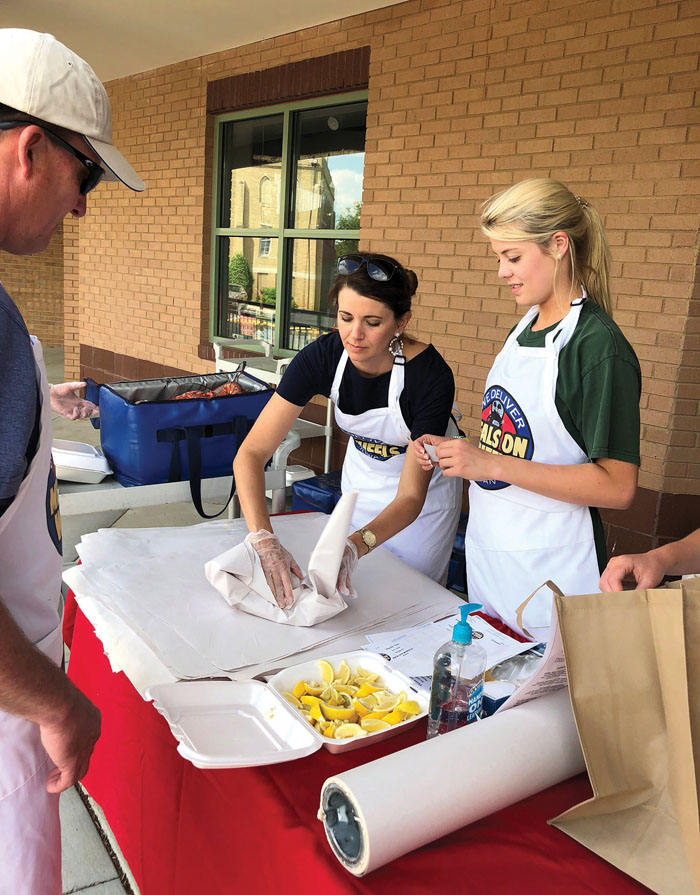 Lauren Whaley and Olivia Dagenhart wrap lobsters as Todd Dagenhart waits to deliver to the next customer during a Meals on Wheels fundraiser. Submitted photo

Meals on Wheels held an unusual fundraiser in May — selling lobsters.

Dagenhart said they had difficulty finding a date between high school proms and other nonprofit fundraisers.

Whaley said she has friends in the Raleigh area who used to sell lobsters to raise money for the Rotary Club.

“It is an unusual idea, and with the right partners, we felt that we could raise significant funds to support home-delivered meals,” Whaley said. “Connie Basinger suggested the idea of selling lobster salad.”

“I’m not excited about cracking the lobster and picking the meat out, so I can imagine that others would appreciate buying the lobster salad ready to eat,” Basinger said.

Rick Anderson of Sidewalk Deli agreed to make lobster salad with the fresh-picked lobster. Danny Roth at The Shuckin’ Shack offered to help with ordering and steaming the lobsters.

They also provided side dishes including corn on the cob and coleslaw, as well as drawn butter and lemon.

The Meals on Wheels staff wrapped the party packs that included lobster-cracking tools and bibs.

“The lobster pick-up was very well organized,” said local attorney Glenn Ketner. “You could drive up, give them your name and they would deliver your lobster order to your car in minutes.”

Promotional materials encouraged families to host a family dinner, neighbors to host a neighborhood get-together, or folks to invite friends to buy a lobster and bring an appetizer or dessert.

Basinger said 246 lobsters and 88 pounds of lobster salad were sold.

“Since the beginning of the year, we offered every donor the opportunity to sponsor meals for a homebound senior as part of each fundraiser,” Basinger said. “Our community cares about others, and when ordering a lobster, many customers also chose to contribute by sponsoring two or more meals for a Meals on Wheels participant.”

The committee said the fundraiser netted more than $5,000.

“We sincerely appreciate the support of everyone in the community, and we owe a special thanks to Rick Anderson of Sidewalk Deli and Danny Roth of the Shuckin’ Shack,” said Whaley.