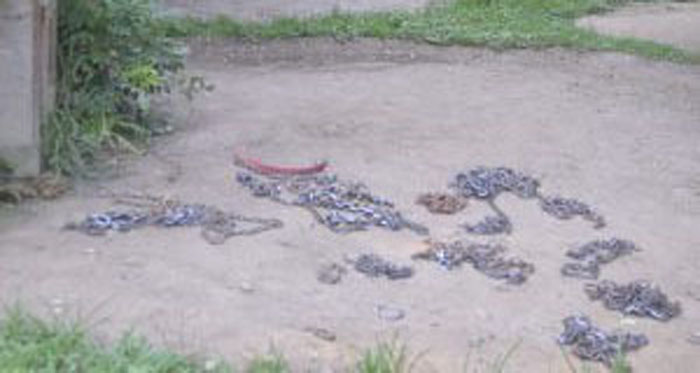 Chains lie next to makeshift dog pens at a house on Short Street where about 20 dogs were seized in the investigation of a dog-fighting ring. Shavonne Walker/Salisbury Post

SALISBURY — Neighbors say they always heard a large number of dogs behind a Short Street home but never imagined it could be the site of a dog-fighting ring.

The U.S. Department of Agriculture executed a search warrant Wednesday at the home, in the 1100 block of Short Street just off North Long Street. The agency was assisted locally by the Salisbury Police Department and Rowan County Sheriff’s Office.

“We can confirm that federal agents were involved in a search executed in Salisbury,” said an email from Anand P. Ramaswamy, deputy public information officer for the U.S. Attorney’s Office in Greensboro.

He gave no details.

The animal welfare division of the USDA searched the home because it believed someone there was using the dogs to fight on site or were housing the dogs used to fight elsewhere.

Authorities seized 20 or more dogs. It’s believed all of the dogs were pit bulls.

A number of abandoned makeshift dog pens were still on the property Thursday. Chains were lying on the ground, and there were obvious signs of worn areas with no grass.

Documents related to the search have not been sealed, Ramaswamy said, but they may not be publicly available until Friday.

Authorities say no one has been charged, but the investigation continues.

Marvin Wood, who has lived next door for nearly 71 years, said he knows the family who owns the home. No one lives at the home, but the owner’s grandson looks after the dogs there, he said.

“Oh yeah, I knew them well. Everybody knows them as many of them as it is. There was a lot of dogs,” Wood said.

He saw the law enforcement cars and said the road was blocked off, even in front of his home. He didn’t know the investigation was about a possible dog-fighting ring.

Wood said the homeowner’s grandson came to the home at least once a day to feed the dogs.

He said as far as he knew, the dogs were taken care of, but he tried to “stay out of other people’s business” and said he couldn’t attest to the treatment of the dogs.

A few houses away, Luther Hill and his wife said they often heard the dogs barking in the middle of the night.

Hill said he also has a dog, but nothing like the many dogs that were at that home.

Other neighbors, who did not want to comment for this story, said they many law enforcement cars lining the street Wednesday.