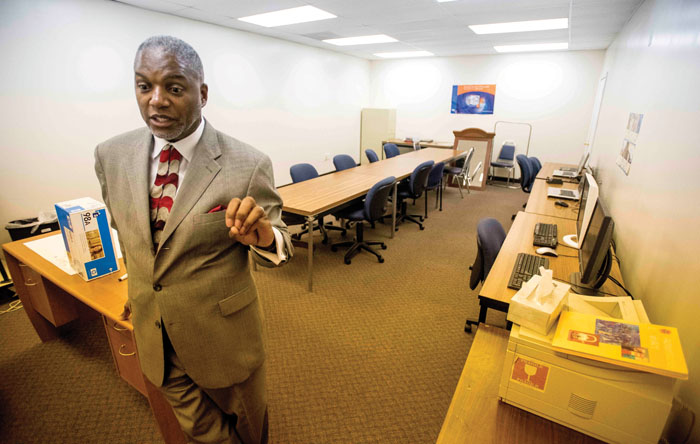 Jonathan Pullin, the principal of the Essie Mae Kiser Foxx Charter School in East Spencer, stands in the room that he hopes will become a computer lab for the students. Jon C. Lakey/Salisbury Post

EAST SPENCER — There are three areas of focus that Dr. Jonathan Pullin, founding principal of the soon-to-open Essie Mae Kiser Foxx Charter School, has planned for his students — math, reading and STEM.

The school is accepting students and will open Aug. 22.

The school will lease the former Northside Community Center at 729 N. Long St. for two years. The East Spencer town board approved a rezoning request Monday night that will allow the school to operate from the 9,000 square foot building.

“We hope that by the third year to start construction somewhere in East Spencer,” Pullin said.

The school will at some point look into beginning a campaign to raise money for a permanent structure, but for now, it will use the building with a few changes. One of those changes will include a secured entrance and front window.

Pullin said they’ll modify a wall that will house an administrative assistant to outfit it with a front window.

The school will begin with kindergarten through fourth grade. Each year after that, a grade will be added through eighth grade. He said the school should be able to accommodate 150 to 200 students.

Staff members will report to the school Aug. 6 for training.

Pullin said he is in the process of hiring teachers, and he’s completed the first round of interviews along with his administrative team.

Pullin said he wants to develop a school culture by focusing on love, respect and integrity. He wants a focus on bilingualism and infusing the arts into the curriculum.

He wants to go beyond the traditional forms of art like drawing and include spoken word, dance and singing. The school will provide some form of art each day.

Every student will be exposed to Spanish, he said.

“I see it as my job to lift the community through the school by providing a quality education for children to be active in the local government scene over time,” Pullin said.

There will be seven classrooms and two others will offer a space for Exceptional Children students.

Pullin hopes the board will also allow a space for a computer lab. He’d like to see 45 computers in a space that was previously used to house a computer lab.

Meals will be prepared off-site and once the school has a permanent location it will add onsite meal preparation.

He’s received support from community residents and the town board, many of whom have said they are excited about having a school in East Spencer.

Pullin hopes those in the community will join staff to paint and prepare the facility for the upcoming August opening.

Pullin said he hopes to continue the legacy of the school’s namesake, Essie Mae Kiser Foxx, by way of community activism. Foxx, who died in 2016, was a native of East Spencer, a mother of 13 children, and a community advocate.

Pullin said it is his goal to use his education and business experience as well as academic experience to “run and operate a successful school.”

Pullin is a former adjunct professor of chemistry at Johnson C. Smith University. He is licensed by the North Carolina Department of Public Instruction as a curriculum instruction specialist. He will complete his K-12 administration license at Gardner-Webb University in July.

His business career began as an environmental scientist for the global firm LAW Engineering. He then opened an environmental consulting firm called Environmental Group of the Carolinas Inc. His firm specialized in environmental site assessments, soil and groundwater testing and remediation, and removal and closure of underground storage tanks, mold, asbestos and lead-based paint assessments and abatement.

This summer, he’ll work on the curriculum so that it meets state standards.

Pullin said he’d love to meet with Rowan-Salisbury Schools Superintendent Lynn Moody and her staff to see how that system can help his school.

“Charter schools and public schools are on the same highway but in different lanes,” he said.

He said the end is the same and that’s to see that students graduate.

Pullin said he tells parents that if their student sticks with the charter school, he promises academic growth.

“I look forward to being part of the community,” he said.

Pullin was born in Brooklyn and raised in Fayetteville.