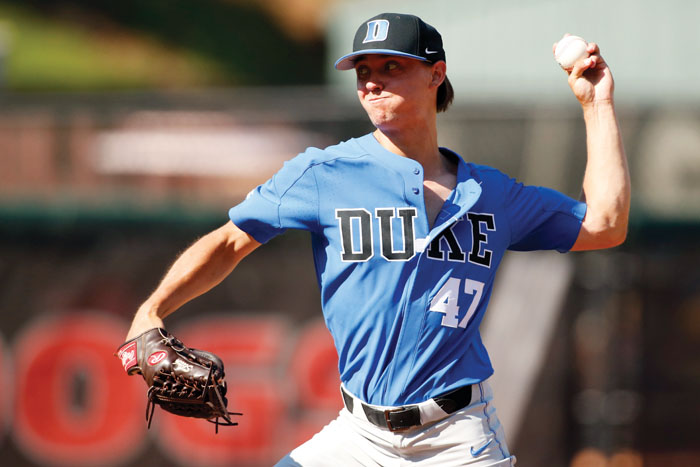 DURHAM (AP) — A breakout year for Duke’s baseball program continues this weekend as the Blue Devils prepare for the first super regional in school history.

If they can beat Texas Tech twice in Lubbock, the Blue Devils will advance to their first College World Series since 1961.

To get this far, Duke had to win four straight games in its regional tournament — and came from behind in each game.

“The one thing about this group is,” coach Chris Pollard said, “they’ve got willpower.”

It’s been a year to remember for Duke (44-16), which set a program record for victories and finished second in the Atlantic Coast Conference Coastal Division on its way to earning its second NCAA berth in three years after snapping a 55-year postseason drought in 2016.

The biggest name in this group is outfielder Griffin Conine, the son of former major leaguer Jeff Conine who led the team with 18 home runs and 52 RBIs and was drafted in the second round by the Toronto Blue Jays.

Now, after a remarkable weekend in Athens, Georgia, they’re preparing to face the Red Raiders, the No. 9 national seed, with the winner of the best-of-three series earning a trip to Omaha, Nebraska, college baseball’s biggest stage.

“It’s definitely a fun time celebrating this, but we still have a lot more work to do,” said freshman Chris Crabtree, selected the most outstanding player of the regional after going 10 for 14 with two home runs and nine RBIs.

“And that’s going to be the focus for the next few days, and then kind of take the momentum on to the super” regional, he added.

The Blue Devils would be done had they not come up with those big rallies — and none was bigger than the first.

Duke, which lost 6-0 to Troy in its NCAA opener, trailed Campbell 8-1 in the seventh inning of an elimination game when lightning held things up for more than 90 minutes. After the break, the Blue Devils came back to win 16-8 after scoring 11 in the ninth inning.

“These guys kind of reached a tipping point,” Pollard said, adding that he told the team “I’m more frustrated for you than I am with you. We’ve got a lot of guys that have a whole lot invested in this program and this season. We’ve got three innings left, maybe something special happens, maybe it doesn’t … (but) we’ve got to be able to walk out of here with our heads up. These guys went back out, we had a couple of hits fall in that they were able to capitalize on.”

Duke then beat Troy 15-6 after falling behind 4-0 to earn a spot in the championship round against host Georgia, the No. 8 national seed. The Blue Devils twice fell behind by three runs before rallying for an 8-5 win that forced a decisive final game, then erased a two-run deficit to win 8-4.

For Conine, Monday was a day he’ll never forget. He hit three home runs in the two games against the Bulldogs — one in Game 1, two in Game 2 — and later was selected by the Blue Jays with the 52nd overall pick.

But before he and the rest of his drafted teammates can worry about whether to begin their pro careers, they’ve got a super regional to play — and maybe more.

“Everyone had written us off, and we had written ourselves off,” Conine said. “We were playing with low energy, kind of like we decided we were going to go home. And we flipped that switch in the seventh inning (against Campbell) and we realized we could do it. … Now we’re two wins from Omaha.”