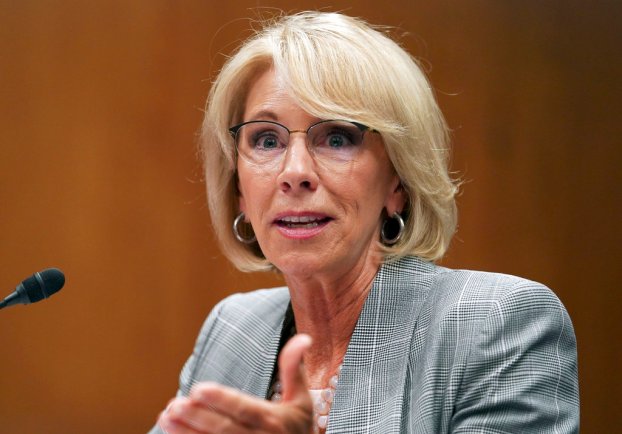 “An interesting concept.” That was the wry observation by Sen. Patrick Leahy, D-Vt., to the disclosure that the federal commission on school safety established in response to the Parkland, Florida, high school massacre will study gun violence without actually looking at guns.

Other words come to mind. Daft. Misguided. Irresponsible. And — given this administration’s deference to the national gun lobby — unsurprising.

Education Secretary Betsy DeVos, chair of the panel convened by President Donald Trump after 17 students and staff were gunned down Feb. 14 at Marjory Stoneman Douglas High School, told an incredulous Senate subcommittee on Tuesday that guns were outside the commission’s purview. Never mind that the alleged 19-year-old Parkland gunman used a military-style assault weapon and that there have been at least 17 school shootings this year. Even Trump didn’t seem to think discussion of guns would be off the table, given that the White House news release describing the commission’s work said an area of focus would be looking at “age restrictions for certain firearm purchases.”

Arguing that it is Congress’ job to create or amend gun laws, DeVos said the commission will instead focus its research on the “culture of violence,” its potential sources and possible solutions. Issues such as mental-health resources and student discipline practices are clearly worthy of examination; good that the commission wants to cast a wide net. But to do so while ignoring the central role that guns play in school shootings makes a mockery of the commission and its promise to make schools safer.

This is not the first time DeVos has put her foot in her mouth when it comes to guns — recall her silly comment about the need for guns in schools to ward off grizzly bears — and there was immediate blowback, causing education officials to try to clarify her remarks. The commission now says it plans to look at age limits and legal procedures to remove guns from people deemed dangerous to themselves or others. That’s better, but not enough.

The commission needs to expand its mission to examine why the United States, as Sen. Jeanne Shaheen, D-N.H., pointed out so powerfully at Tuesday’s hearing, has had 57 times as many school shootings since 2009 as the rest of the Group of Seven large advanced economies combined.

DeVos would do well to listen to the students she is supposed to serve who, in the wake of the Parkland shooting, have mobilized a potent movement for school safety that includes looking at the obvious — and doing something about guns.

Larry Efird: Reflections on a school year – knowing what to erase

It’s happened once again. Another school year has come to a close. Speaking as a person who has gone through... read more