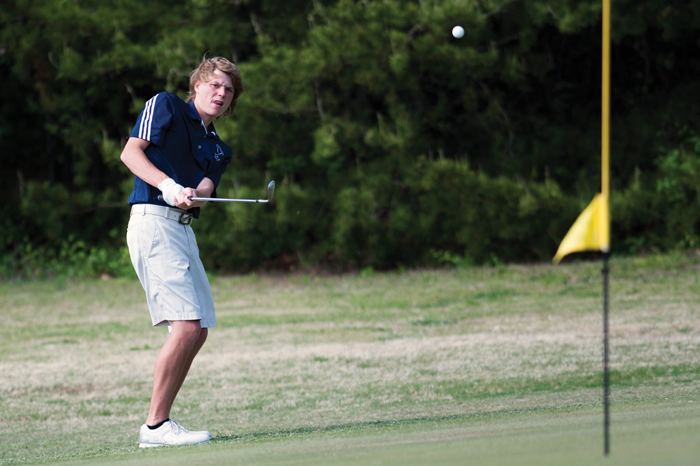 GRANITE QUARRY — Folks familiar with the competitive golf scene in Rowan County have certainly heard of Bryson Sprinkle. The East Rowan senior has literally grown up on the golf courses around the county, including the last four years as a steady force for the ultra-successful Mustangs’ golf program.

Despite his stellar play at a high level for East, Sprinkle has often been overshadowed by Mustang superstars like Logan Shuping (Sprinkle’s first cousin) and Nick Lyerly. In 2018, however, the spotlight is squarely on Sprinkle as the Rowan County Player of the year.

“It has been a goal of mine for a while,” Sprinkle says of the county honor, “but obviously, we have had some pretty stout teams for the past four years with Logan and Nick and William Garland this year. All of us are good, which kept me motivated to work hard, to keep growing, so I could play better each and every round.”

Sprinkle was the top golfer on the 2018 East team that blazed through the North Piedmont Conference undefeated (35-0), won the NPC tournament, won its fourth consecutive county title (by 40 shots) and qualified for the state 3A tournament last month. East finished seventh in the state tournament while Sprinkle made a run at the individual title, before fading on the second day and finishing 13th.

“After the first day, I was only one or two shots out of the lead,” he said, “but on day two, I just didn’t have my best stuff. I shot a 79 and just never got it turned around.”

But veteran East Rowan coach Rhett Teems is adamant about Sprinkle’s true value to the program, not only this year, but the last four seasons.

“Bryson was good as a freshman,” Teems notes, “and every year since then, he has finished in the top five in the conference and the top three on our team. Bryson is the only player I have coached that went to the state tournament four straight years. Logan didn’t, Nick didn’t but Bryson did.”

Sprinkle also made all-county and all-conference all four years as well. He is a model of consistency at a high level. He lost the county championship in April to teammate Garland, but his entire body of work earned his Player of the Year honors.

Teems recalled that at the recent East Rowan sports banquet he stated that on any other team we have played in the last four years, he would have been player of the year and most valuable golfer. He just happened to be on a team with some superstars.

Sprinkle feels his golf game has evolved during his four years at East. “I think over the years, I have become more consistent and more accustomed to the tournament atmosphere, he said. “I am hitting it a little farther now but that can get me trouble sometimes.”

Sprinkle is a fourth generation golfer in his family and may well be the best of the bunch. His grandfather, Gilbert Sprinkle, is a long-time coach and administrator at East and his father Thad, a standout athlete in his day at East, is a frequent partner with Bryson in local tournaments, like the Labor Day golf event. Like his dad, Bryson also was a basketball standout for the Mustangs for four seasons as a shooting guard and point guard. His basketball days are over but his golf career will continue this fall at Catawba College.

“It has always been my goal to play college golf somewhere,” Sprinkle says. “My dad introduced me to Coach (Sam) Gealy (Catawba golf coach) back in the 7th or 8th grade and we just talked and got to know each other better. He showed real interest in me and I like what he had to say.”

He says he looks forward to playing with Catawba and in the highly competitive South Atlantic Conference. Sprinkle plans to major in business with a minor in project management. Beyond that he would love to be able to play professionally some day.

“That is my biggest goal of all,” Sprinkle says. “If I get there, that is great, but those guys are on a completely different level, so it will take a lot of work and a lot of practice. But hopefully I can get there.”