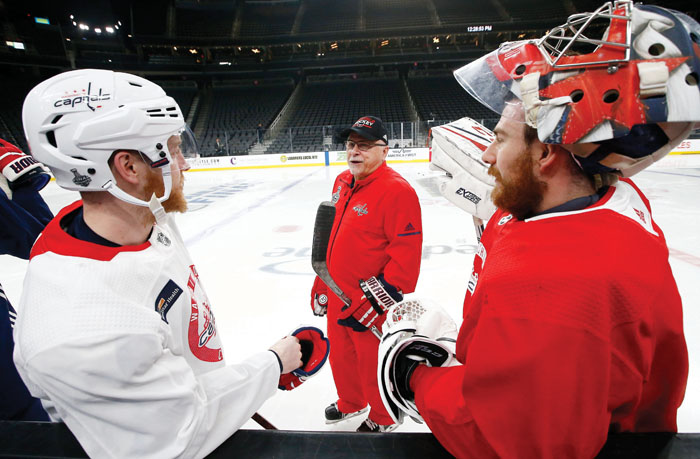 LAS VEGAS (AP) — The Washington Capitals will play for a Stanley Cup championship Thursday night for the first time in 43 NHL seasons. Alex Ovechkin is one win away from carving his name into history at the peak of his incredible hockey career.

With a 3-1 lead in the Stanley Cup Final and a city thousands of miles away thirsting for its first championship in a generation, the Vegas stakes are awfully high for the Caps in Game 5.

Ovi still wants his teammates thinking about the Golden Knights, not that silver trophy.

“To be honest, I think most of us have never been in this position,” said Ovechkin, who could become the first Russian captain to raise the Cup. “For me personally, I don’t try to think about it too much what’s going on and just try focusing on different things. But it’s hard.”

Exactly what could distract an athlete of Ovechkin’s magnitude from the imminent chance to validate his place in his sport?

“Whatever. Cars. Hotels. You know, Vegas.”

Indeed, this desert is a strange place to end a drought. But with three chances to get one win, Ovechkin and his teammates want to seize their very first opportunity for the clincher on the Las Vegas ice.

With one more victory, Ovechkin would finally have team success to complement his formidable individual accomplishments. The vaunted goal-scorer can also succeed where a generation of Washington athletes have fallen short by leading the Capitals to their first title and the city’s first major pro sports championship in a quarter-century.

With his 33rd birthday looming in the fall, Ovechkin understands the opportunity before him and the magnitude of the situation for everyone who has ever worn the Capitals’ jersey.

It’s enough to tighten anybody’s grip on the stick, but the Caps didn’t appear overly tight during their workout or in the dressing room afterward.

“It’s a great time,” Ovechkin said Wednesday. “Probably the best time in my life, hockey-wise. We just enjoy it together, this moment. It’s fun.”

Even with a commanding series lead, the Caps all spoke of the importance of consistency and seizing the moment after their light workout. Washington has a shockingly lengthy franchise history of playoff collapses, but these Caps promptly won all three potential closeout games in their first three playoff series this spring.

“Maybe because we’ve talked about it so much,” Caps defenseman John Carlson said. “Guys are sick of hearing about it from the meetings. Sick of not getting it done. They all kind of blend together, but I think we have come out with great efforts every closing-out game, and we’re going to need a big one. This is a good team at home. It’s going to take a really good effort to get it done.”

The Caps don’t have the luxury of thinking about the minor disappointment of not being at home to secure Washington’s first championship in a major pro sport since the Redskins’ Super Bowl victory in January 1992. Back home in D.C., fans will be cheering on their team at Capital One Arena in a watch party that sold out in about 20 minutes.

So far in this series, the Caps have done just about everything well. Washington has scored 16 goals in four games against the reeling Golden Knights, whose charmed expansion season has run short of magic in three consecutive losses.

While the Caps focused on changing nothing from their last three efforts, the Golden Knights also don’t believe they need a wholesale change. Coach Gerard Gallant’s team is banking on the resilience of a group that hasn’t lost four consecutive games at any point in their utterly charmed inaugural season.

“It’s not the first adversity we’ve faced this year,” forward Jonathan Marchessault said. “You’d rather have the odds in your favor, but I’m thinking about (Game 5). If you start thinking that we have to win three games, sometimes it gets demoralizing. We’re just focused on the next one. … They’re in a better situation than us, that’s for sure. Stuff we’ve done this year has never been done, so I think that’s what we’re thinking about.”