The weight they carry: Teaching is full of heartbreak, reward 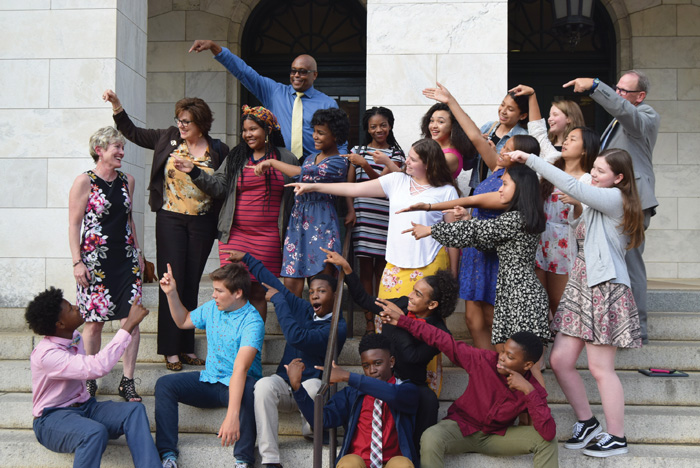 Angelia Fleming's students congratulate her in their own special way following a successful presentation to the Rowan County Board of Commissioners. Fleming worked hard to guide the students through a project where they marketed different regions of Rowan County. Rebecca Rider/Salisbury Post

SPENCER — Angelia Fleming doesn’t get much time to eat lunch. An AIG and language arts teacher at North Rowan Middle School, Fleming spends the short lunch period looking after her students like a mother hen looks after her chicks.

The cafeteria is bustling and full of noise. Fleming is up and about checking on her seventh-grade class and stopping friendly food fights before they begin. She even ventures outside to the school’s small courtyard to check on her eighth-graders, who are just wrapping up their own lunches.

When she has a chance to sit down, Fleming is still busy. She scoots over a few chairs to comfort a student who has her head on the table. After a few minutes, she scoots back the other way and offers another student some strawberries from her own lunch, trying to tempt a queasy stomach.

Fleming puts her students’ needs before her own — sneaking in bites of food between classes or at meetings. Her hunger can wait, but her students can’t.

“Sometimes they really need somebody,” she said.

When students don’t get the care and love they deserve at home, it’s often up to teachers like Fleming to provide it. Fleming said it’s simultaneously one of the hardest and most rewarding parts of being a teacher.

“It’s your biggest wish as a teacher that you could reach every student and make a positive difference. … But there are ones that you just can’t seem to be able to help. And that’s heartbreaking,” she said.

Teachers offer comfort, support, school supplies, clothing, food and affection to students who may not find it elsewhere. It’s a career requirement that’s not advertised in any job description or taught in any class.

It’s a lesson Fleming learned her first year as a teacher. Her job at North Middle started suddenly after a teacher left the school two weeks before end-of-grade exams. According to school rumor, the teacher had reached the end of her rope with student behavior.

But it was the students who suffered.

“I remember one of my students asking if I ‘would stay the whole year or not. Everybody keeps leaving.’ I told him I would stay,” Fleming recalled. “… I think they were really looking for someone they could depend upon and count upon.”

True to her word, Fleming stayed — for the rest of that year, and the next and the year after that. It hasn’t been easy. In fact, the past 10 years have been some of the hardest of her life.

She can still remember the first time a student hurt her and made her angrier than she’d ever been. One day, she said, a student went through her things, stole her cellphone and destroyed it.

“I always try to trust my students, so I was very hurt by it,” she said.

At the time, there was little the school could do, and Fleming was asked if she wanted to press charges. She declined but said she was fed up.

“Initially, I wanted him out of my class,” she remembered.

When she went home, she sought comfort in prayer and spent a lot of time thinking about it — about the incident, the student and her role as a teacher. The student had made her year difficult, yes, but there had also been some minor successes. She’d learned what made him tick and found strategies to get him to work and press forward.

“If he just went to somebody else’s class, he would be with someone who didn’t understand all his needs,” she thought.

The next day, she told the administration she’d keep him in her class. The rest of the year wasn’t any easier, but Fleming said she’s never regretted the decision.

It helped her learn that teaching isn’t always hugs, smiles and apples on desks. It’s hard work, and often teachers are the ones who have to roll up their sleeves and help students learn how to function.

The emotional labor inherent in teaching is often back-breaking and can lead to teacher burnout — and it’s something few non-educators may realize. Fleming wakes up early and stays late to care for her students or provide them new opportunities.

Sometimes, the weight of it is too much and she thinks about quitting. But her students always drag her back.

“You might be the best moment in a child’s life,” she said.

While she struggles with student behavior, the students themselves are struggling.

“Some of our kids go through things that we can’t even imagine dealing with,” she said.

Students deal daily with poverty, violence and every type of abuse imaginable. For these children, school can be a haven and a teacher, a beacon of hope.

Sometimes, all they want is for someone to see them.

Once, a rowdy student raised his hand in class and asked, “Mrs. Fleming, will you respect me?”

She was still a young teacher, but Fleming knew that respect wasn’t a given — from student or from teacher. So she said that they could work to earn each other’s respect.

“I try to make connections with each of them,” she said. “… A lot of them they want someone to care and to listen.”

Sometimes, however, teachers don’t make the cut. Those are the days that haunt her.

“It’s your biggest wish as a teacher that you could reach every student and make a positive difference,” she said. “… But there are ones that you just can’t seem to be able to help. And that’s heartbreaking. … You’re wondering if you’re falling short somehow.”

Then sometimes, they succeed.

Recently, Fleming said she had a student who dealt with a lot of anger. Instead of going to exploratory classes, where she was likely to have an outburst, the student would come to Fleming’s class and pace.

“I’m surprised there’s not a groove in my floor,” Fleming said with a laugh.

The classroom was quiet, and slowly, the student allowed Fleming to help her manage her anger. It taught Fleming that often what she teaches isn’t just academics — it’s life lessons.

Fleming is lucky enough to be able to “loop” with her students, meaning that she teaches them all three years of middle school. It helps her build bridges, encourage growth and inspire them.

One day at the end of May, Fleming woke up at 2:30 in the morning, a classroom discussion buzzing around her brain.

“Why are all the stories we read depressing?” her students asked. “Why doesn’t anything have a happy ending?”

In the wee hours of the morning, Fleming decided that she would give them a happy story, even if she had to write it herself.

At 6:30 a.m., Fleming was at her desk, tapping away at her computer. When her seventh-graders came in for their class, she read the story aloud. It was their own — about the students’ trip to Pilot Mountain that fall, the fun they’d had and the ways they’d inspired her.

At its heart was a kernel of unshakeable truth — her belief in her students.

“They give you hope every day,” she said. “And if you take the time to listen to them and believe in them, they will do anything for you. They can accomplish amazing things. … They will really try, and they will give you their whole hearts with trying on things if you believe in them and encourage them.”

While some have a dim view of young people, Fleming’s is bright and burning.

“Our youth is incredible,” she said. “… (They have) an important voice.”

As their teacher, she does what she can to make sure that voice is heard — whether that’s helping students launch an organization to show children national parks or bringing in district administration to hear their ideas.

On a cloudy May day, Eisa Cox, RSS director of secondary education, visited Fleming’s seventh-graders. The class was pushing for a districtwide middle school leadership team — just like the high schools have.

“We want to lead our education,” one student argued. “We are the faces of the future.”

Fleming said she tries her best to be deserving of them. And when a student says they were inspired by or pushed into success by a teacher, that takes the cake.

“That’s why teachers come to work every day,” Moody said.

Fleming’s students know what makes a good teacher — and they know how to appreciate the ones they have. For students, what matters is a teacher who’s compassionate, who knows how to relate to them and who loves them.

“I think what makes a good teacher is a teacher that thinks of you more as a human than just a thing,” student Evan Davis said.

Even as sixth-, seventh- and eighth-graders, students know that teachers are often underpaid and overworked. And they’re inspired just as much as they inspire.

“I think that being a teacher is one of the most important jobs on planet earth,” student Abbey Beam said. “Because without teachers we wouldn’t know anything. And I feel like they deserve more respect and more things than they have, because they really do give a lot to us students. … I’m really proud of all the teachers that went out to Raleigh and Charlotte to march for more pay and more things for the students and more things for them, because that shows that they really care for education and they really care for us students. And that makes me feel good that I see my teachers going out there and fighting for not only us but for themselves. I think that was a really great thing that they did.”

When she feels burned out, Fleming seeks comfort in her family — her husband, her children and her dog. As expectations build and more duties are stacked on her plate, as the things students deal with grow increasingly troubling, Fleming said it’s tempting to throw in the towel.

But she digs her heels in and holds on hard to something former North Middle Principal Alexis Cowan told her: