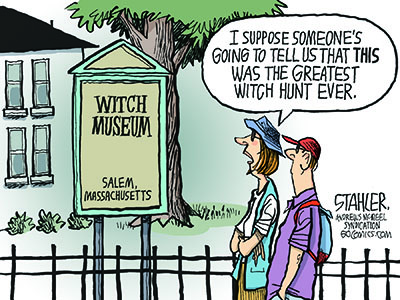 I think the mayor was spot on … It is not the place of the board to accept resignations of staff any more than it is to hire them.

The mayor’s comment was not meant to be negative toward the chief; it was merely a fact that the board is not meant for that purpose. That’s why they hire a city manager, to run the day-to-day operations of the city. …

I agree the chief needs to stay.

What a sad life you must have, to compare our president — no matter what party leads our country — to Hitler. I feel sad you have this type of bitterness in you.

Don’t worry; you only have six more years of Mr. Trump and our wonderful economy, then you can put another Obama back in office. Or at least try.

I think this letter is close to the mark. We must remain vigilant with 45 and contain him as much as possible until we find a suitable replacement.

… Letter: Not all officers are in it to make a positive difference

How sad it is that you should post such a slanderous diatribe against our law enforcement community. It says a great deal more about you, sir, than the men and women in blue.

I would suggest that were one to reasonably accept your unreasonable classification system, types 2 and 3 would make up much less than 1 percent of our law enforcement community.

I believe FBI and Department of Justice statistics would support my assertion, also.

… Letter: North Main is a mess

I agree. Who is making these decisions? It is about as stupid as putting a round-a-bout way out on Sherrills Ford Road. Someone needs a lesson in common sense.

Secondhand smoke isn’t something the kids need to be around. …

It’s about doing what is best for the greater good and health of the community. If you want to give yourself cancer, do it alone or a private/personal space.

I guess Whitey Harwood is celebrating.

While studies on the effects of secondhand smoke are inconclusive, it is a rather stinky habit. And the butts littering the ground are unsightly and unsanitary. If you absolutely cannot go a couple of hours without a nicotine fix, get a vape pen.

Mind your own business. That is the problem with liberals; they are always trying to tell others what to do.

I guess we should now ban charcoal grills from parks. I see you non-smokers over there next to that cancer-causing grill, grabbing yourself a hunk of that burnt piece of hog. This is at least 100 times as dangerous to your health as smokers are. Enjoy your park. Those of us whose taxes help fund this park will just have to stay home.

Not funding Meals on Wheels or Rufty-Holmes Senior Center is a heartless deed that would definitely be associated with the GOP.

Look, people get old and can’t take care of themselves. I was a beneficiary of Meals on Wheels several years ago as a retiree just released from the hospital and having to learn to walk again. I received assistance for four months, but I paid for it as well.

It is our civic duty to take care of our elderly, as well as the impoverished citizens of Rowan. I would say show your heart, Commissioner Pierce, but then that would be a waste of good air. Thank you, Commissioner Klusman, for the concern.

… The weight they carry: A look at the teaching profession

Thank you for showing non-educators what a school day is like. (Hint: it doesn’t end at 3 o’clock.) Much appreciated.

Thank you, Ms. Rider and the Salisbury Post, for Angelia Fleming’s story. It brings back memories of my career as a middle and high school math teacher on Long Island, New York. I salute the dedication and unconditional love North Carolina teachers have for their students, in spite of those who fail to appreciate the gifts they render and those who willfully establish roadblocks to public education.

I was spared most of the interference from the non-educators, the experimenters and those who profit from exploiting school systems in crisis. I am grateful that my early retirement due to a family crisis occurred before the testing craze gained corporate control over our public school system.

… Jennifer Hubbard: Are schools giving up on literacy?

Marvelous letter! I suddenly remembered that scene in “The Time Machine” (1960) where one of the “simpleton” people from the future suddenly remembers where there are some books when asked about them by the time traveler. The time traveler takes several volumes from a shelf, only to have them crumble in his hands. He then curses (well, as much cursing as would be allowed in a 1960 movie) those people of the future for having squandered the knowledge of thousands of years.

This sounds absolutely penny-wise and pound-foolish to me. I believe the board should reconsider this decision.

School librarians (and libraries in general) are crucial tools in teaching children to read and obtain information. Even if physical books are less common than they were in the past, modern librarians do so much more than scan and shelve books!

Bravo, Jennifer Hubbard. Never doubt the difference a caring adult makes in a child’s life. A school librarian can create a special bond outside the classroom. Just as children need direction and coaching within their classroom, librarians provide guidance for creating those “extraordinary readers” our school system promotes. It’s not about how many articles you complete. It’s about fostering a lifetime thirst for learning through reading.

Thank you for this wonderful letter, Jennifer. I had the benefit of six years with Mrs. Detty as well. I think our choice is quite clear: We can invest in educating our children now, or we can pay to incarcerate them later.

“Like trees in a forest, only the tallest and well-rooted will survive.” Speaks volumes.

In your research, did you happen to investigate what the state was doing to school budgets and teacher salaries?

This is not an individual school district problem, it is a systemic problem at the state level. It’s not just literacy that’s under fire, it’s all of education.

Suppose your state senators had to work under the same conditions as N.C. teachers? Suppose we cut half the senators to balance the budget? Perhaps the outcry would be different.

Superintendent Moody probably deserves an award for keeping as many staff as possible and not consolidating schools under the triage budget that all schools in North Carolina are working with.

I don’t disagree that it is egregious that schools have to decide between arts, librarians or assistant principals, but this isn’t Superintendent Moody’s doing — it’s the state government that sees dollar signs more clearly than they see children and the importance of their education.

I would like to clarify that the Essie Kiser Foxx Charter School was never involved in efforts to purchase the Dunbar property. They were interested in leasing space, if a facility could be developed on the property. As the article mentioned, there have been several presentations made to the Charter School Board to announce its plans and strategies.

It is vital to put the school in the community in which it serves. Essie’s school will be a great addition to the community. I am confident that student success will start to soar.

Congratulations, Owen! So proud of you. You are an awesome role model to more young athletes than you will ever know.

… Dr. Michael Bitzer: Are we approaching the end of an era?

Personally, I would be even happier if we had a government that obeyed the Constitution that gave it its life and limitations. Otherwise, one that would guard our freedoms and leave us otherwise alone. …

The best president we ever had and the only president that never harmed the republic was William Henry Harrison. He caught a cold after his inauguration speech and died 30 days later of pneumonia.

I would just be happy with a government that actually worked for its people.

So, you’ve never arrived at a restaurant before the rest of your party, been seated, then told the server you’d wait to order until they arrived? I’ve done it many times.

There have even been occasions when I was seated, realized I was there at the wrong time or day, then left the restaurant without ordering a thing. No one ever called the police on me.

As a matter of fact, at a Starbucks here in Salisbury, I’ve waited at a table — without ordering — for almost 45 minutes for a friend to show up. Why wasn’t I asked to leave or to purchase something?

I think Starbucks took the right approach by emphasizing that all patrons should be treated with respect.