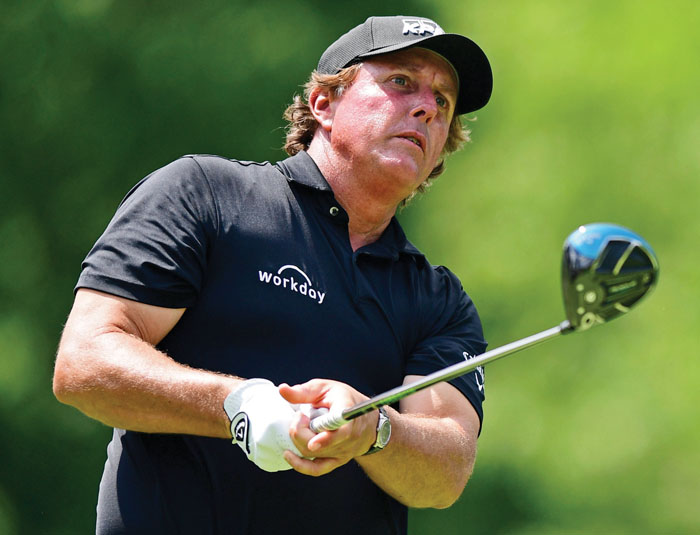 FILE - In this Saturday, June 2, 2018 file photo, Phil Mickelson follows his tee shot on the 18th hole during the third round of the Memorial golf tournament in Dublin, Ohio. The St. Jude Classic takes its final turn as the PGA Tour’s last tuneup for the U.S. Open, and Phil Mickelson is among those happy to see the tournament become a World Golf Championship event starting in 2019. Mickelson calls the TPC Southwind the most underrated course on tour. (AP Photo/David Dermer, File)

MEMPHIS, Tenn. (AP) — Count Phil Mickelson among those happy to see the St. Jude Classic shift to a World Golf Championship even as he uses the TPC Southwind one final time as a tuneup for the U.S. Open.

“I really, really enjoy this golf course,” Mickelson said Wednesday . “I think it’s the most underrated on tour. I’m really excited that we are coming back here for a World Golf Championship to end our season-long race next year. It’s quickly become one of my favorite events.”

Mickelson has tied for second twice and tied for third, all since 2013. He wouldn’t mind doing more than just playing well at the PGA Tour’s last stop before the U.S. Open next week at Shinnecock Hills.

“I very much would like to win,” Mickelson said. “Winning earlier this year meant a lot to me, and I’d love to add a couple more this year and this is an ideal spot to do it. It’s a course that I’ve played well in the past, that rewards good ball-striking, good putting. I know I’ll be in it on Sunday. I just hope I shoot low enough on Sunday.”

Mickelson has plenty of company.

Dustin Johnson, a winner here in 2012, is here working his way back to the top-ranked golfer in the world after slipping to No. 2. That still makes Johnson the highest-ranked player in this event since Rory McIlroy came in at No. 2 in 2012, and he’s among six of the world’s top 28 ranked players here this week.

Quality won’t be a problem next year. That’s when this event sponsored by FedEx replaces the WGC-Bridgestone Invitational and becomes the World Golf Championships-FedEx St. Jude Invitational.

For now, Johnson said he likes how he is hitting the ball. The 2016 U.S. Open champ will be heading to Shinnecock Hills on Sunday night after this 72-hole event starts Thursday.

“I always tend to play well on very challenging courses,” said Johnson, whose lone win this year came in January at the Tournament of Champions. “I like it. It makes you think, and it’s fun. You got to really focus on every shot, so it’s something that I enjoy.”

Two-time defending champ Daniel Berger is trying to become the first to win his first three titles at the same tournament since Leonard Gallett at the Wisconsin PGA in 1929, 1931 and 1933 and the tour’s first three-peat winner since Steve Stricker at the John Deere Classic between 2009 and 2011.

“It would mean a lot,” Berger said of a possible three-peat . “I haven’t had the year that I’ve wanted to have so far, and I’ve played pretty well, just haven’t had too many of the finishes that I want to have.”

Just need to continue to do what I do and obviously a three-peat would be fantastic. But got to do what I’ve been doing and just let that take care of the rest of everything.”

With the TPC Southwind playing at a par 70 over 7,244 yards, Mickelson called this event perfect preparation for the U.S. Open — the championship that has eluded him so far finishing second six times. Being in contention sharpens both his mental approach and his game.

“And that’s what playing here in Memphis does is that this is a golf course where again precision is a key factor,” Mickelson said. “It doesn’t beat you up with length. You don’t have to go out and bomb it. You’ve got to be precise with every shot off the tee, all the way through the green, and that’s where I think it really helps benefit my play next week in the Open .”

NOTES: Joaquin Niemann, the 19-year-old from Chile, also is here fresh off tying for sixth at Memorial along with amateur Braden Thornberry, the junior from Mississippi who tied for fourth here last year. … John Daly also is here on a sponsor’s exemption.