‘Souvenir: A Fantasia on the Life of Florence Foster Jenkins’

St. Thomas Players to present A Hysterical Tale of One Woman’s Passion for Music 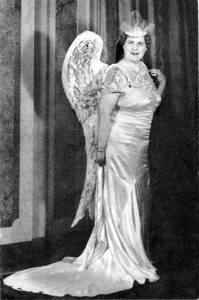 Florence Foster Jenkins, a wealthy socialite with a famously uncertain sense of pitch and key, has her story told in “Souvenir” with the same wit and verve for which this infamous singer came to be adored.

Told through the eyes of her accompanist, Cosmé McMoon, this loosely biographical comedy flashes back to her unique musical career.

“At first glance, Souvenir seems to be one big gag about bad opera singing,” Director David Pulliam weighs in. “Luckily, it is much more — a play about ambition, celebrity, artistic truth, self-delusion, the indomitability of the human spirit, and friendship.”

Jenkins was born July 19, 1868 and was actually a childhood piano prodigy. She even performed at the White House during Rutherford B. Hayes’ presidency. After graduating high school, Jenkins discovered her passion for singing and desired to study the art abroad in Europe. Her parents refused to support such a venture due to her lack of natural talent but this did not deter Jenkins from pursuing her career on her own.

She began to arrange her own performances and upon the death of her parents, she came into a large inheritance which allowed her to expand her singing activities and performance value.

She became a word-of-mouth sensation in the 1940s through her self-funded performances in New York City and gained national acclaim. The historian Stephen Pile has ranked her “the world’s worst opera singer.” Florence Foster Jenkins brought joy to many, albeit in ways she did not intend. People found her performances comical and her incredible confidence and determination inspirational. This would attribute to her timeless memory.

Written by Stephen Temperley, “Souvenir: A Fantasia On the Life of Florence Foster Jenkins” was nominated for a Drama Desk Award in 2005 and a Tony Award in 2006. This story was also adapted into a major motion picture starring Meryl Streep and Hugh Grant in 2016. The film “Florence Foster Jenkins” scored Meryl Streep a Critics’ Choice Movie Award for Best Actress in a Comedy.

Pulliam explains: “Steven Temperley has fashioned Souvenir as a two-hander, in what he calls a ‘fantasia,’ between the two characters, Florence Foster Jenkins and her accompanist, Cosmé McMoon. In music, a fantasia is a composition with its roots in improvisation with artists exploring a theme together.

“In Souvenir, Mary Ann McCubbin and Steven Stringer explore the unique relationship between two aspiring artists, Cosmé who is filled with self-doubt and Florence, who has absolutely no self-doubt whatsoever. Is her confidence a good thing? Is she mad? Does he join her in madness?”