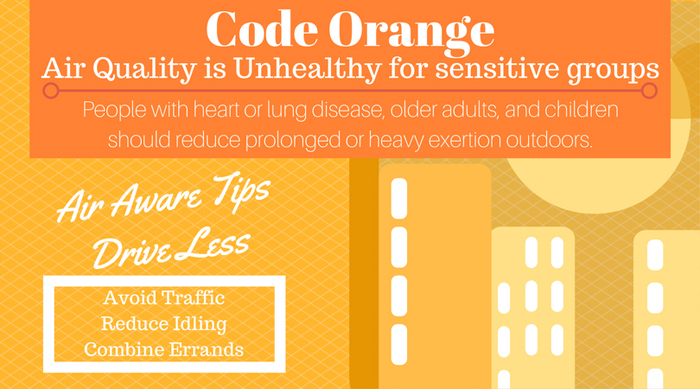 Today is a Code Orange air quality alert day from 10 a.m. to 8 p.m. Ground level ozone is to blame. The air will be unhealthy for sensitive people, such as children, active adults and those with heart or lung diseases. Try to limit outdoor activity.

It will be mostly sunny and 84, with northeast wind at 5-7 mph. Tonight will be partly cloudy and 65, with light east wind. Patchy fog will form around 4 a.m.

Friday is predicted to be a Code Orange air quality day, too. We’ll see patchy fog before 9 a.m., then it will be mostly sunny and 87, with southeast wind around 5 mph in the afternoon.

Friday night will be partly cloudy and 68, with south southwest wind calming in the evening.

Saturday will be mostly sunny and 89, with southwest wind around 5 mph in the afternoon. A 20 percent chance of showers and thunderstorms is possible Saturday night, with partly cloudy skies and a low of 69.

Sunday will have a 40 percent chance of showers before 1 p.m., then thunderstorms after that. It will be partly sunny and hot, with a high of 90. The chance of more rain Sunday night is 60 percent, with mostly cloudy skies and a low of 68.

Tuesday will be partly sunny and 84, with a 30 percent chance of showers and thunderstorms. The same chance is possible Tuesday night, with a low of 67.

Wednesday should be partly sunny and 87.