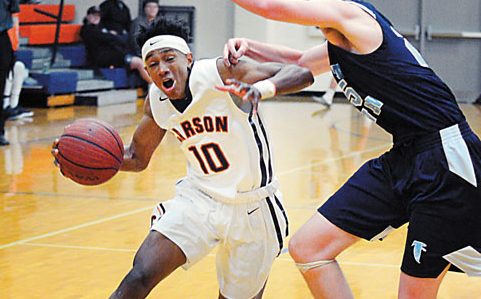 On Thursday, Williams signed with Claflin University, a Division II school in Orangeburg, S.C.  While it’s a late signing, Williams may have an even better career for the Claflin Panthers than his brother, Tre, did. Tre was a two-year starter for Claflin after spending two years at Davidson County Community College. Even more important, Tre also earned a degree in business administration from a school with a stout academic reputation.

“Claflin had a lot to offer academically, they won their conference (SIAC) this year, and the school just drew me in,” said Jailen, who also plans a business administration major. “I had a chance to go watch Tre play a few times, and Claflin was a welcoming place. Basketball is their main sport, so every home game is a big deal. It’s a social event, and I loved that atmosphere.”

Williams’ scoring averages progressed  from 8.5 to 12.7 to 17.7 during the course of his varsity high school career, as the slim 6-footer kept getting more confident, tougher and better. He was a handful on both ends of the floor, second team all-county as a junior and first team as a senior. He also made all-district and All-North Piedmont Conference this season.

“The thing about Jailen is he can get by any defender,” Carson head coach Brian Perry said. “I didn’t see anyone who could stay in front of him. The way the game is played now, it’s drive-and-kick, and when they can’t contain your point guard, a lot of good things will happen. The head of the snake, the captain of the boat, no matter what terminology you want to use, Jailen was our leader. He was the one guy we couldn’t play without, the one guy we couldn’t afford to get hurt or get in foul trouble.”

That’s high praise. Williams’ senior teammates included Jamarius Hairston, a Lander University signee who was good for 20 points per night and Owen White, the MLB draft pick who was a deadly shooter and scored 15 points per game. Perry put the ball in Williams’ hands, relied on him to make the right decision and the right pass or to score himself. Williams is athletic enough that he finished plays at the rim. He had a few dunks that he laughed off as “rim-grazers.”

“My first priority was to get everyone on my team involved,” Williams said. “Jamarius is a great player and he had a great year for us. Owen, Cole Perry and Cameron Prugh, all of those guys can really shoot, and when they’d got hot, I got it to them. I tried to get on the boards too. If I got a defensive board, that made it easy to get us going in transition.”

Carson’s offense worked smoothly enough that it produced a school-record 74.1 points per game.  The Cougars (26-3) won Christmas tournament, North Piedmont Conference regular season and NPC  tournament championships and reached the fourth round of the 3A playoffs before running into eventual 3A champion Cox Mill.

Besides scoring points at a school-record pace, Carson also turned in one of its best defensive seasons, holding opponents to 58.9 points per game. Williams was a big part of that.

“He has quick hands and quick feet,” Perry said. “He can stay in front of his man. He’s a gritty defender, and he had a great career for us on both ends of the floor.”

Williams made the single largest shot of Rowan’s high school season when he converted a  twisting shot in the lane with 4.5 seconds left to beat Salisbury (27-4)  in the Christmas tournament championship game at Catawba.

Besides being clutch, Williams was remarkably consistent. As a senior, he scored in double figures in 27 of his 29 outings, including the last 25 in a row.  He scored 20 or more points 13 times as a senior, with a career-best, 30-point effort against Gastonia Hunter Huss in the second round of the playoffs. He averaged 21.5 points in the playoffs.

Williams was under-recruited. Claflin came to watch him, but most of his other suitors were Division III schools.

“It’s pretty much been Claflin for a long time,” Williams said. “When the Pfeiffer coach (Jeremy Currier) got the job at (D-II) Young Harris, he started communicating with me, but I’d made up my mind about Claflin, by then. It was just a matter of getting a package worked out with Claflin. Thankfully, we got the package we needed.”

The one knock on Williams is that he’s thin. He doesn’t have the muscle and power that Tre brought to the table. But he’s still growing. He’s gotten a little taller every year at Carson, and he’s sure to make some strength gains in the Claflin weight room.

“I was really lucky to coach Jailen and Tre,” Perry said. “We’ve had a Williams in our program the last eight years and they’ve been great kids to deal with and their parents have been great to deal with. I think Claflin sensed all of that positive family vibe.  Tre had a a great experience at Claflin, and it should be the same for Jailen. He’s a special player.”