Pitcher goes undrafted as teams pass on troubled past 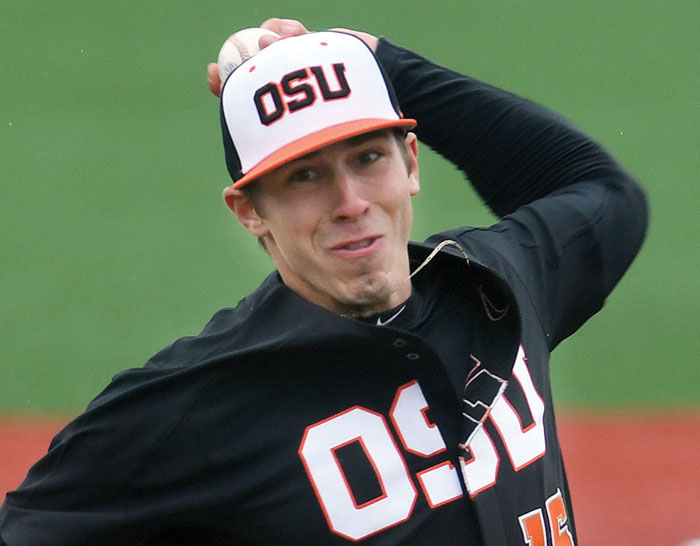 NEW YORK (AP) — Oregon State pitcher Luke Heimlich, who as a teenager pleaded guilty to molesting a 6-year-old relative, was not selected in the Major League Baseball draft for the second straight year.

Heimlich is a two-time Pac-12 pitcher of the year and is regarded as one of college baseball’s top players, but his troubled past has given big league teams pause.

The 22-year-old left-hander was expected to be drafted in the early rounds last year until The Oregonian reported last June that Heimlich admitted to the crime when he was 15. He did not play for Oregon State last year in the second round of the NCAA Tournament or the College World Series.

Heimlich recently insisted in stories by Sports Illustrated and The New York Times he was actually innocent and said he pleaded guilty because of poor legal advice — to avoid the possibility of jail time and prevent further stress for the girl.

“Nothing ever happened,” he told the Times, “so there is no incident to look back on.”

In an interview with the Times, the girl’s mother said “there is no way he didn’t do it.”

The three-day draft concluded Wednesday night, with 1,214 players selected — but not Heimlich.

The Oregon State star is 15-1 with a 2.42 ERA and 142 strikeouts against just 25 walks in 111 2/3 innings this season. The Beavers are hosting Minnesota in the super regionals starting Friday, with the winner of the best-of-three series advancing to the College World Series in Omaha, Nebraska. Heimlich, who is 26-2 over the last two seasons, is expected to pitch against the Golden Gophers.

Several players with famous baseball bloodlines were taken by teams during rounds 11 through 40 on Wednesday.

George Bell Jr., son of the 1987 American League MVP, was selected by San Francisco in the 13th round. The younger Bell is a 6-foot-4, 210-pound slugging outfielder — like his dad was — for Connors State College in Oklahoma.

Tennessee catcher Benito Santiago, son of the 1987 NL Rookie of the Year by the same name, was picked in the 34th round by St. Louis.

Houston drafted the brothers of two of its young stars, taking Alvin Community College infielder J.C. Correa — brother of Carlos, who was the No. 1 overall pick in 2012 — in the 33rd round, and New Mexico high school lefty A.J. Bregman — brother of Alex, who went No. 2 overall in 2015 — in the 35th.

The Rangers took Michigan — and former Mississippi — quarterback Shea Patterson in the 39th round. Patterson is listed as a third baseman, but hasn’t played college baseball so far.

“We went and worked him out and he looks pretty good in the baseball uniform and doing some baseball skills, swinging the bat,” Rangers senior director of amateur scouting Kip Fagg said. “Obviously, he’s going to play quarterback at the University of Michigan. We’ll see what happens with that one, but I’m not going to predict anything. … He’s going to be the quarterback at the University of Michigan, let’s put it that way.”

Oakland made a similar pick, but much earlier in the draft, when it took Kyler Murray at No. 9 overall. Murray is the favorite to replace Heisman Trophy winner Baker Mayfield this season as Oklahoma’s starting quarterback. He told reporters he will play football this season.

Adam Hackenberg, brother of former Jets and current Raiders quarterback Christian Hackenberg, was drafted in the 39th round by Kansas City. He’s a catcher from The Miller School of Albemarle in Virginia, where his coach was former big league closer Billy Wagner. Hackenberg was considered one of the top prospects in Virginia, but he’s committed to play baseball at Clemson.

Another famous name popped up in the later rounds of the draft when Cannon King, the son of Larry King — yes, that Larry King — was drafted by the White Sox in the 37th round. The younger King is a second baseman at Beverly Hills High School.

The final player selected in the draft was Florida high school right-hander Ben Specht, who went to the Dodgers at pick No. 1,214.