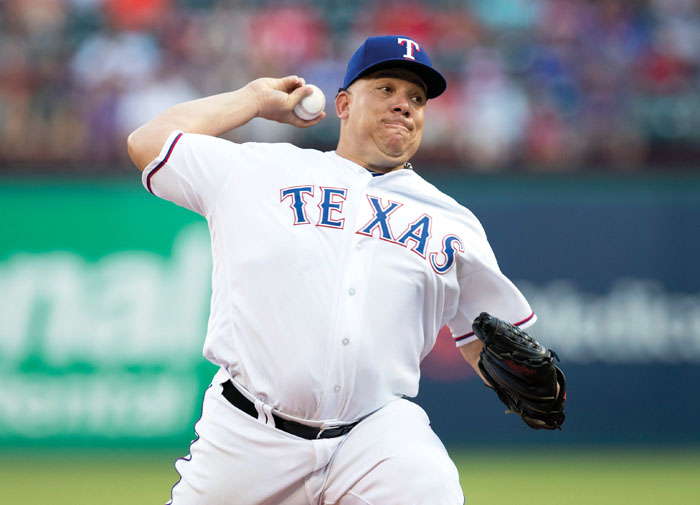 SAN DIEGO (AP) — Johnny Wholestaff did a tremendous job for the San Diego Padres against the Atlanta Braves on Wednesday.

Wholestaff, of course, is a reference to when a team needs to tap its bullpen to get through all 27 outs. Matt Strahm and four fellow relievers came through by holding the Braves to four hits in a 3-1 victory.

“They were outstanding. All of them were great,” said manager Andy Green, who turned to a bullpen game for the second time in 11 games because rookie left-hander Joey Lucchesi remains on the disabled list. The other time was a 6-1 loss at the Los Angeles Dodgers on May 27, also started by Strahm.

“As an offense we’ve done a good job of taking notice that that’s the strength of our team, especially late in games there,” Eric Hosmer said. “If we can just continue to add on to leads and play for one run late there, it’ll be good for us.”

Strahm went 2 1/3 innings, allowing one run and two hits while striking out two and walking one. He gave up Freddie Freeman’s home run with two outs in the first, his 11th.

Rookie lefty Jose Castillo (1-0) allowed one hit and struck out two in 1 2/3 innings. Adam Cimber struck out the side in the fifth. Kirby Yates walked two in two hitless innings.

Closer Brad Hand came on for the eighth and allowed a leadoff double to Ozzie Albies before striking out Dansby Swanson, Freeman and Nick Markakis. Hand then retired the side in the ninth for his 18th save.

The Padres acquired Strahm from Kansas City last year while the lefty was still recovering from surgery on his torn left patellar tendon. Green said there’s value to opening a game with Strahm because the manager sees him as a potential starter.

“It’s not just punting to a bullpen day when you have him. He was great all the way through,” Green said.

“Obviously, it was a good day for the bullpen,” Strahm said. “Whenever Andy wants us to do it, we’re more than willing to. … Andy told me to go out there and be aggressive until he came and got me, and that was when he came and got me.”

The Padres took two of three from the Braves, who dropped percentage points behind Washington atop the NL East standings.

The Padres went 7-3 on a homestand against Miami and Cincinnati — the NL’s other last-place teams — and the Braves.

“They’re a great ball team right now and they’ve been playing great baseball and so have we, and it shows us where we stand,” Strahm said.

Facing a team going the bullpen day route is “definitely not normal,” Freeman said. “You get into a rhythm and you know you’re going to face someone at least two, three times. It kind of worked for them today, but as hitters it’s tough to get into a groove.

“Yates’ split-finger can neutralize lefties. Obviously, Brad Hand can neutralize anybody. They had some good arms come in today and shut us down,” Freeman said.

“We just couldn’t do enough offensively. Foltsy did a good job of keeping the game there for us and giving us a chance.”

The Padres got all the runs they needed in the second against Mike Foltynewicz (5-4). Hunter Renfroe hit a leadoff single and scored on Cory Spangenberg’s triple to the gap in right-center. Manuel Margot’s one-out single to right brought in Spangenberg, an infielder who pitched the ninth in Tuesday night’s 14-1 loss. The Padres loaded the bases with two outs before Eric Hosmer struck out.

ARLINGTON, Texas (AP) — Bartolo Colon worked five innings for his 243rd career victory, matching Hall of Fame pitcher Juan Marichal for the most by a player born in the Dominican Republic when the Texas Rangers beat the Oakland Athletics 8-2 on Wednesday night.

The 45-year-old Colon (3-3), in his fourth attempt at the milestone victory, got it against one of the 10 other major league teams he has pitched for since his big league debut in 1997 with Cleveland. He allowed Khris Davis’ two-run homer and had one strikeout and two walks.

Colon leads active pitchers with 243 wins and 3,383 2/3 innings pitched. His 2,499 strikeouts are third among active pitchers, behind CC Sabathia and Justin Verlander. Nicaragua’s Dennis Martinez, with 245 wins, is the only Latin American native with more victories than Colon.

Jurickson Profar homered twice and had a career-high five RBIs, while Joey Gallo and Ronald Guzman also went deep for the Rangers in the first four innings against Daniel Mengden (6-5).

David Robertson (4-2) worked one inning and Aroldis Chapman finished for his 15th save in 16 opportunities.

Judge returned to the lineup after sitting out Tuesday. He went 0 for 9 with a record eight strikeouts in Monday’s doubleheader at Detroit.

The Yankees are the only major league team that hasn’t been shut out this season.

BOSTON (AP) — Andrew Benintendi and Christian Vazquez each hit a solo homer and had an RBI double to back a strong start by Eduardo Rodriguez, carrying the Red Sox over the Detroit Tigers.

Xander Bogaerts added a two-run double during a four-run third inning for the Red Sox, who won their fourth straight game and improved their major league-best record to 43-19.

“You make a mistake, they’ll jump you and they put it out of the ballpark or off that doggone wall,” Tigers manager Ron Gardenhire said. “We knew that coming in here — they’re a great hitting team and when you make mistakes they’re going to jump you for it.”

Miguel Cabrera and JaCoby Jones each had two hits for Detroit, which has lost four of five. The Tigers have dropped 13 of their last 17 on the road.

Michael A. Taylor had three hits and three RBIs, while Trea Turner and Juan Soto had two hits each for Washington, which has won 11 of its last 15 games. Roark (3-6, 3.56 ERA) allowed two runs on six hits.

C.J. Cron hit his 13th homer and Brad Miller had three hits for the Rays, who have lost six straight and have scored six runs in their last four.

The Nationals reached starter Jonny Venters (1-1) for five runs in the first inning. A reliever being used to “open” the game — something the Rays have done eight times in their last 17 games — Venters was starting his first game in his 245 appearances. He lasted only six batters.

Bundy (4-7), who held the Mets to three hits while striking out five and walking three, was sharp through most of the afternoon. Richard Bleier followed Bundy with a scoreless eighth, and Brad Brach picked up his 10th save of the season by retiring three straight batters in the ninth after putting the potential game-tying run at first.

The Orioles, who had lost their previous seven games before arriving in New York, didn’t fare well against Mets starter Zach Wheeler, who allowed three hits and had five strikeouts with a walk in seven innings. But Baltimore was able to take the lead against New York closer Jeurys Familia (2-3) in the eighth inning.

CLEVELAND (AP) — Carlos Carrasco struck out 10 and allowed one run in seven innings, and the Indians defeated the Milwaukee Brewers.

Carrasco (7-4) worked out of a bases-loaded jam in the second and threw inning-ending double play balls in the fifth and seventh. The right-hander pumped his fist after Lorenzo Cain bounced into a double play on his 109th and final pitch. Cody Allen got the final four outs for his 11th save and the Indians took both games of the brief series. Chase Anderson (4-5) allowed three runs in 4 1/3 innings. The Brewers have lost three straight for the first time since April 26-29, when they dropped four in a row. Milwaukee manager Craig Counsell was ejected by plate umpire Quinn Wolcott after Shaw was called out on strikes in the eighth.

CINCINNATI (AP) — Ian Desmond hit a two-run homer, and Gerardo Parra and Tony Wolters each drove in a pair of runs as the bottom of Colorado’s batting order powered the Rockies past the Reds.

Colorado arrived in town with a season-high four straight losses, all set up by blown leads. Jon Gray (6-6) went five innings and showed signs of emerging from his recent struggles. The bullpen held on to give the Rockies their second consecutive win in the series.

Cincinnati’s Scooter Gennett drove in a pair of runs with a double and a sacrifice fly on the one-year anniversary of his four-homer game against St. Louis.

Desmond connected off Sal Romano (3-7). Wade Davis got his NL-leading 20th save in 22 chances.

The Reds fell to 21-41 overall. They’ve matched the 1950 team for second-worst start in franchise history.

SAN FRANCISCO (AP) — Pinch-hitter Alen Hanson had a tying, two-run homer off Brad Boxberger with two outs in the ninth inning, Brandon Crawford singled home Andrew McCutchen in the 10th and the Giants beat the Arizona Diamondbacks for their sixth win in seven games.

Boxberger blew a save for the second time in 16 chances. Arizona had been 29-0 when leading after eight innings.

McCutchen doubled off Andrew Chafin (0-2) with two outs in the 10th, a catchable drive that Jarrod Dyson misjudged and allowed to drop behind him on the warning track in center field. Crawford worked the count full and grounded a single between first and second, into right field, as McCutchen scored standing up.

Hunter Strickland (3-2) got out of a two-on jam in the 10th, striking out Ketel Marte, then retiring Nick Ahmed on a popout with runners at the corners.

PITTSBURGH (AP) — Josh Harrison went 2 for 3 with a bases-clearing double, David Freese and Gregory Polanco drove in two runs each and the Pirates broke out of an extended offensive funk by outlasting the Los Angeles Dodgers.

Corey Dickerson had three of Pittsburgh’s 10 hits and scored four times as the Pirates won for just the fifth time in 18 games to avoid dropping below .500 for the first time all season.

Steven Brault (5-1) picked up the victory in relief of ineffective starter Trevor Williams, who lasted just three innings. Felipe Vazquez worked out of a two-on, one-out jam in the ninth for his 11th save.

Matt Kemp hit his 10th home run of the season and drove in five runs for the Dodgers, who saw their four-game winning streak come to an abrupt halt. Cody Bellinger added his 10th home run and second in as many nights.

CHICAGO (AP) — Jason Heyward hit a game-ending grand slam off Adam Morgan with two outs in the bottom of the ninth inning to give the Chicago Cubs a 7-5 victory over the Philadelphia Phillies on Wednesday night.

Heyward’s drive sent the Cubs to their eighth win in 10 games, and it came after Philadelphia’s Dylan Cozens hit a tiebreaking, two-run homer against Brandon Morrow in the top half.

Kyle Schwarber started the winning rally with a leadoff walk against Seranthony Dominguez and advanced to second on an errant pickoff throw by catcher Jorge Alfaro before Albert Almora singled, putting runners on first and third.

Morgan (0-2) came in and walked pinch-hitter Ian Happ to load the bases before Ben Zobrist forced a runner at home with a tapper to the mound. Heyward then connected for a long slam to right-center on a 2-2 pitch and got mobbed by teammates as he crossed the plate, the crowd letting out a deafening roar at Wrigley Field.

Cory Mazzoni (1-0) got two outs in the ninth. Anthony Rizzo homered against Aaron Nola, and Chicago won after blowing a 3-0 lead.

Philadelphia’s Aaron Altherr greeted Steve Cishek with a tying, three-run homer in the sixth after Jose Quintana dominated for Chicago, but the Phillies lost for the fourth time in five games.