Some words are radioactive 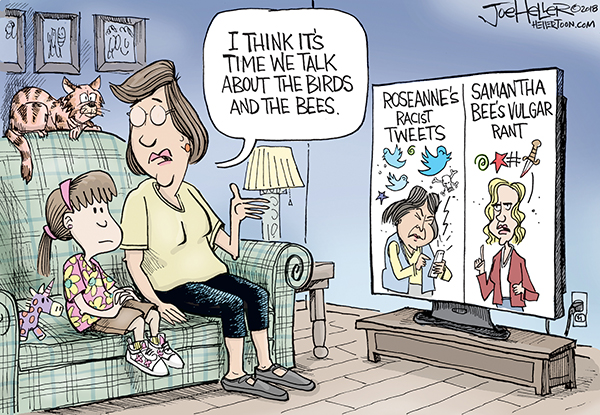 The Federal Communications Commission prohibits obscenity, profanity and indecency from radio and television because Congress told it to do so. Congress did so because it was representative of the voters’ collective opinion.

The old saw — profanity being the sign of a weak vocabulary — isn’t true or even remotely persuasive. The best writers use it to fantastic effect. Mark Twain concluded, “In certain trying circumstances  … profanity furnishes a relief denied even to prayer.”

But that saw endures because of collective distaste for the profane, a dislike deeply rooted in the need for civil exchanges over even the deepest disagreements. Profanity can be deployed for a cheap laugh, occasionally can cut to the quick and sometimes can decide a particular political argument. But it can frequently diminish those who employ it. …

Journalism and politics have long been encampments of the profane, the vulgar and the indecent. Watch an episode of “Veep” for television’s understanding of the language of the self-important worldly. Profanity is often a conceit, and usually a thin one. Occasionally it’s genuine and embedded from birth, but not often.

Even then there are limits about what can or ever should be said. Racism should and does — as seems likely in the case of Roseanne Barr — dissolve a career. I’m not in charge of deciding who should be banned from what platform, but I’ve turned down invitations from Bill Maher’s staff since his use of the c-word in reference to Sarah Palin.

This deeply offensive word, used most recently by Samantha Bee toward Ivanka Trump, is inherently violent in its effect and often in its intent. People don’t have to abet the worst offenses, and they don’t have to avert their eyes when even the last guardrails fall. I’m a Victorian, but one doesn’t even have to be close to my catechism of the appropriate to recoil from Barr or Bee.

The n-word is out of bounds and it is an unchallenged good that it is. The c-word should join it in the radioactive pile. Can it shock? Of course. But every time it is used, on any occasion, it destroys the speaker a little bit and the hearer some as well.