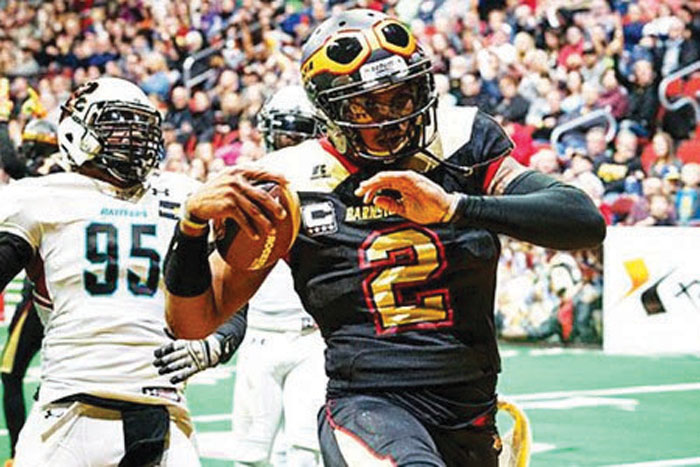 DES MOINES, Iowa — Drew Powell, quarterback for the Iowa Barnstormers of the Indoor Football League, is a strong candidate for the loop’s MVP award.

Powell, a 6-foot-3, 225-pound southpaw from Livingstone College, is the IFL’s leading rusher, averaging 82.8 yards per game, nearly twice as many as the next-highest player — Sioux Falls’ quarterback Lorenzo Brown (42.8).

Powell has scored 20 touchdowns on the ground and thrown for 27, while averaging 137.6 yards passing for the first-place (10-2) Barnstormers. Iowa visits Sioux Falls on Friday night, to take on the third-place Storm (9-3). Arizona is in second place in the IFL at 10-3.

At home on Sunday against Arizona, 41-38, as Powell ran for 129 yards and two touchdowns. He also passed for two scores.

Powell was a four-year starter (2012-15) at quarterback for Livingstone and as a senior in 2015, led the Blue Bears to their first winning season in 17 years.