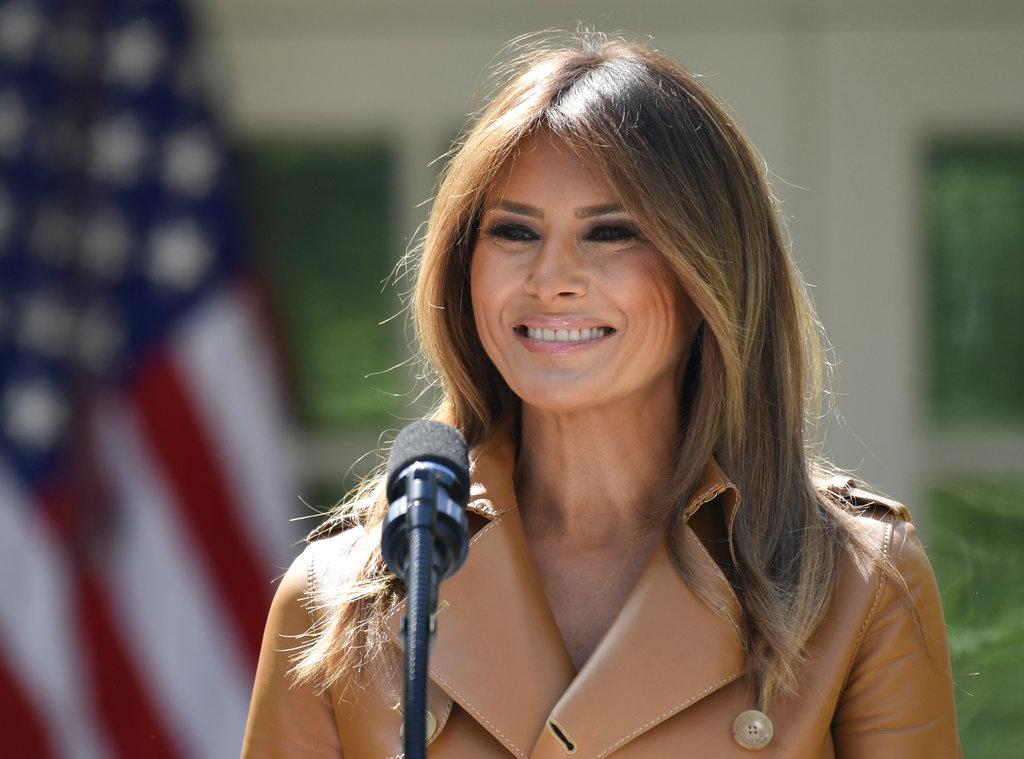 In this May 7, photo, First lady Melania Trump speaks on her initiatives during an event in the Rose Garden of the White House in Washington. (AP Photo/Susan Walsh)

In the endless soap opera that is TrumpWorld, the springtime absence of the first lady apparently is getting its very own mini-episode.

Melania Trump announced her bizarrely named “BeBest” campaign to protect children from bullying in early May — and then almost immediately dropped out of sight.

She was hospitalized for five days without prior public notice, and until a private appearance Monday night with Gold Star parents, she hadn’t been sighted since — an absence of almost four weeks.

And she still hasn’t been seen publicly, nor is she scheduled to accompany President Donald Trump on two international trips, including to this week’s G-7 summit in Quebec.

As her absence grew longer, weird theories circulated on social media, without a shred of evidence. The #whereismelania hashtag was born.

And late-night comic Stephen Colbert quipped, “Well I’m not surprised — it took that Shawshank guy years to tunnel out.”

When reporters initially inquired after her whereabouts, a curious-sounding tweet — presidentially dictated? — responded from the @FLOTUS Twitter account. It accused the news media of “working overtime,” a favorite Trumpian phrase, to speculate about what she was doing.

And on Monday, the first lady’s communications office pushed back harder: “Mrs. Trump has always been a strong and independent woman who puts her family, and certainly her health, above all else, and that won’t change over a rabid press corps. She’s confident in what she is doing and in her role, and knows the rest is just speculation and nonsense.”

Is Melania Trump’s absence a reasonable cause of media inquiry? You bet it is.

Is the press corps “rabid,” as charged? Well, sometimes — but not in this case.

Presidential children have some rights to privacy, and reporters have properly left 12-year-old Barron Trump alone.

But the first lady?

She’s a public figure, whose staff and security cost taxpayers millions of dollars a year. When she announces her pro-kids campaign or wears a statement white chapeau or attends a state dinner, news coverage is expected.

It comes with the territory, whether that territory is something she sought or not.

And so, too, when she does something highly unusual, such as drop off the scene altogether.

“What Mrs. Trump has executed here seems unprecedented,” Katherine Jellison, a professor at Ohio University who studies first ladies, told Katie Rogers of the New York Times. “I don’t know what we want to call this period where she hasn’t been in view. Respite from the role of first lady? Vacation from first lady? Medical recovery period?”

Whatever it is, it’s odd and worthy of notice.

The pro-Trump media is, of course, playing its expected role in defending the first lady’s privacy.

On Fox News Channel’s “The Five,” Greg Gutfeld took a shot at CNN’s Brian Stelter, mocking him as “the nation’s hall monitor” for devoting a segment of his “Reliable Sources” show to her absence.

Granted, it’s largely the gossip value — not any crucial public interest — of the Melania Trump story that makes up most of its appeal. And granted, the first lady deserves a measure of privacy: less than her son, more than her husband.

And, also granted: This is happening at a time when the priorities of the mainstream media are reasonably being criticized.

Scant attention was paid, for example, to new reports about the thousands of deaths caused by Hurricane Maria last year in Puerto Rico, far more than the official government count.

As James Downie aptly wrote in The Washington Post: “On the major Sunday talk shows — the purest distillation of what the media and political establishments consider worth discussing — not once was Puerto Rico mentioned. That is a disgrace.”

Still, beyond the talk value of the Melania Trump story, there is a reason to care. And a reason to pay heed.

It’s this: The Trump administration specializes in knocking down well-established norms of how the government and the public — and the media — behave toward one another. These norms are part of the glue of a functioning democracy.

It’s important for the news media to report on how those norms are eroding, to keep track of the changes, whether radical or superficial.

The unprecedented weeks-long absence of the first lady may not rank particularly high in that order, but it’s still worthy of notice.

So, Melania, we’ll be looking for you. And there’s nothing wrong with that.