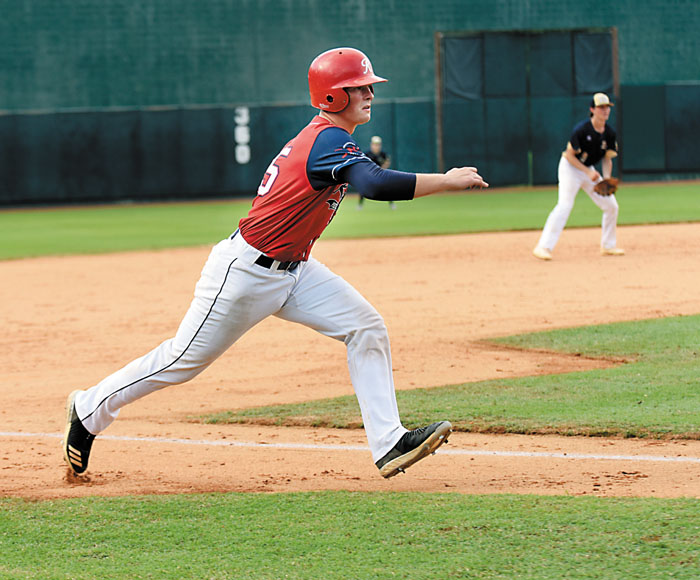 Wayne Hinshaw file photo/for the Salisbury Post ... Rowan’s Trevor Atwell scores a run during a game from earlier this season. Atwell had two runs batted in during Wednesday night’s American Legion game against Randolph County at Newman Park. Rowan lost for the first time this season, 9-8.

SALISBURY —  Shaky defense shoveled a hole so deep on Tuesday that even a seven-run rally by the Rowan County American Legion team couldn’t pull out victory.

Down 8-0 at one point, Rowan finally lost to Randolph County Post 45, the defending state champs, at Newman Park, 9-8.

It was the first loss of the season for Rowan (9-1) and it was well-earned. Randolph was the better team defensively and delivered more clutch hits. Rowan made four errors that were officially scored  and failed to make other plays it needs to make. At the plate, Rowan left 10 on base. leaving them loaded in the first and fourth innings and stranding two more on in the sixth when Randolph (8-6) was reeling.

Rowan starter Maddux Holshouser deserved a better fate. But after Rowan’s defense faltered with three errors during Randolph’s ugly, four-run fourth, he was in a 5-0 hole, and headed for an early shower.

Randolph catcher Landon Smith produced run-scoring singles in his first two at-bats and his solo homer in the fifth off Rowan reliever Jake Perez made it 6-0. When the visitors’ lead swelled to 8-0 in the top of the sixth, Rowan fans couldn’t have been blamed for heading toward the parking lot and checking the TV listings.

But Rowan stirred to life in its half of the sixth and got into Randolph’s bullpen. Garrett Alewine’s RBI single broke the ice. Pinch-hitter Trevor Atwood delivered a two-run single to make it 8-3, and when C.P Pyle kept things rolling with another two-run single, it was suddenly, 8-5. Hayden Setzer’s double off the wall and a wild pitch made it 8-6. John Owen’s RBI single pulled Rowan within 8-7.

With Rowan batting around, Alewine, the backup catcher, had a chance for his second big hit of the inning, but that was a lot to ask. He made solid contact, but his flyball to right field was the third out.

Randolph tacked on a large run in the top of the seventh — side-arming reliever Scout Nichols was charged with that one — and it proved decisive.

Rowan got a run in the seventh on Pyle’s sacrifice fly, but veteran Dawson Painter struck out the power-hitting Setzer to close the game with the tying run on base.