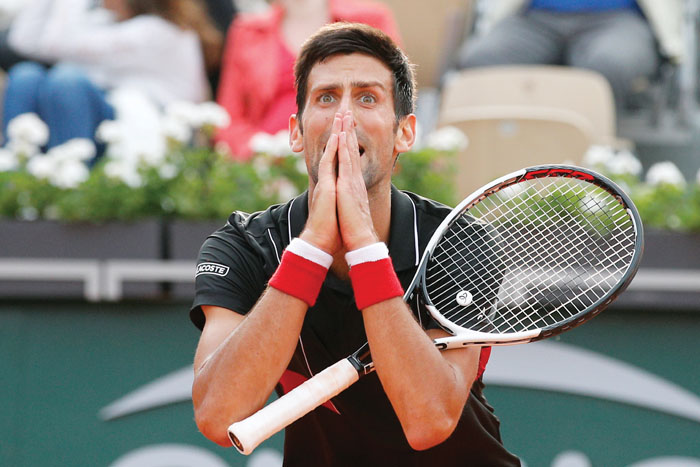 Serbia's Novak Djokovic reacts after missing a shot against Italy's Marco Cecchinato in the tie break of the fourth set of their quarterfinal match at the French Open tennis tournament at the Roland Garros stadium in Paris, France, Tuesday, June 5, 2018. (AP Photo/Christophe Ena )

PARIS (AP) — It was difficult to discern which was less likely: that 12-time major champion Novak Djokovic would falter in his French Open quarterfinal or that Marco Cecchinato, who never won a Grand Slam match until last week and once faced a possible ban for losing on purpose, would rise to the occasion.

Either way, Tuesday’s outcome was stunning. To both men. And to anyone watching.

Djokovic, bothered by neck and leg problems, went from two sets down to the verge of forcing a fifth, but he frittered away good chances and in the end was beaten by the 72nd-ranked Cecchinato 6-3, 7-6 (4), 1-6, 7-6 (11) in a rollicking match filled with engaging exchanges and plenty of drama.

“A hard one to swallow,” a glum Djokovic acknowledged during a brief news conference, in which he delivered clipped answers and said he might not play during the upcoming grass-court season.

Cecchinato is the lowest-ranked French Open semifinalist in 19 years and the first Italian man to make it that far at any major in 40 years.

“The best moment of my life,” Cecchinato said.

Djokovic served for the fourth set at 5-3 — “I thought,” Cecchinato would say, “my Roland Garros was about to end” — but the 2016 French Open champion got broken. Djokovic then held three set points in the tiebreaker — “I saw ghosts,” Cecchinato would joke — but couldn’t convert.

At 7-6 in the closing tiebreaker, he pushed a backhand long. At 8-7, Cecchinato ended a 20-stroke exchange with a swinging volley winner. At 9-8, Djokovic flubbed a forehand, knelt and clasped his hands together as if praying, then raised an index finger as if to plea, “Let me have ONE of these!”

Cecchinato (it’s pronounced cheh-key-NAH’-toe) came through on his fourth match point, looping in a backhand return winner as Djokovic tried to surprise him with a serve-and-volley attempt.

The 25-year-old Cecchinato dropped onto his back on the clay, then sat in his sideline chair, bowed his head and cried.

Consider that Cecchinato has never won a tour-level match on a surface other than red clay; as it is, he entered this season with a career record of 4-23 and entered this tournament with a Grand Slam record of 0-4.

Then there’s this: The 25-year-old from Sicily was suspended for 18 months and fined 40,000 euros (about $45,000) by his national federation in July 2016 for allegedly fixing a match by losing at a lower-tier Challenger event in Morocco a year earlier. Cecchinato appealed and, eventually, the Italian Olympic Committee announced that the sanctions were dropped on a technicality.

On Friday, Cecchinato will face No. 7 seed Dominic Thiem of Austria, who made it to his third consecutive French Open semifinal by beating No. 2 Alexander Zverev of Germany 6-4, 6-2, 6-1. As the score indicates, that was far less compelling, in part because Zverev felt pain in his left hamstring 10 minutes into the match and wound up having his leg taped by a trainer.

Zverev was coming off a trio of wins that went five sets and, while still just 21, could not will his body to another comeback.

“He’s one of the fittest guys on tour,” Thiem said, “and even for him, it’s maybe even a little bit too tough to play three five-setters.”

In the women’s quarterfinals, No. 10 Sloane Stephens beat No. 14 Daria Kasatkina of Russia 6-3, 6-1, and No. 13 Madison Keys eliminated unseeded Yulia Putintseva of Kazakhstan 7-6 (5), 6-4. Stephens beat Keys in the U.S. Open final last September, and Thursday’s rematch will be the first all-American women’s semifinal at the French Open since Serena Williams defeated Jennifer Capriati in 2002.

That Cecchinato would be a semifinal participant was far harder to predict.

In the first round at Roland Garros, he dropped the first two sets against Marius Copil, a player ranked 94th, before coming all the way back to win 10-8 in the fifth.

“Seems like a month ago,” Cecchinato said with a laugh Tuesday, when he answered reporters’ questions in Italian, Spanish and English.

Since then, employing a smooth one-handed backhand, he has beaten players seeded No. 8 (David Goffin) and No. 10 (Pablo Carreno Busta), before adding Djokovic to his list.

Djokovic, who missed the last half of 2017 with right elbow trouble and had surgery in February, is clearly not at the height of his power. Indeed, his seeding of No. 20 was his lowest at any Grand Slam tournament in a dozen years.

Djokovic, Cecchinato said, “seemed unsure of himself at the beginning.”

By the end, though, points were tight and taught, one even lasting 30 strokes. Djokovic actually won more total points, 144-140.

Somehow, Cecchinato won the one that mattered most, the last.

“I had to push. I knew I had to take risks,” Cecchinato said. “Because if I played just to stay in points, I could never beat Novak.”