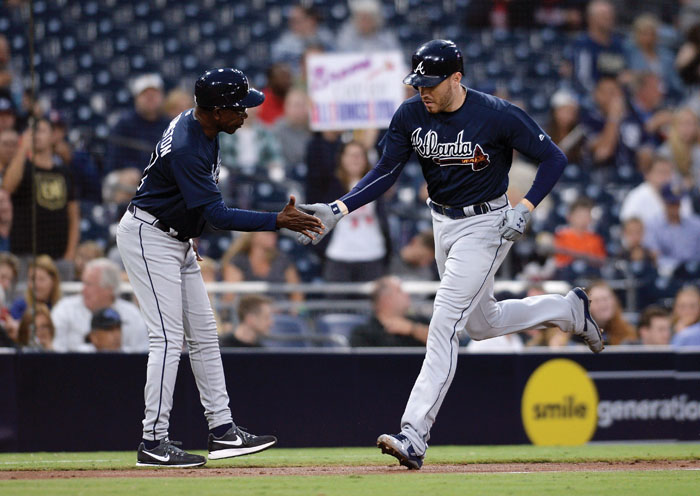 Atlanta Braves' Freddie Freeman, right, is congratulated by third base coach Ron Washington after Freeman hit a home run during the third inning against the San Diego Padres in a baseball game Tuesday, June 5, 2018, in San Diego. (AP Photo/Orlando Ramirez)

By BERNIE WILSON, AP Sports Writer
SAN DIEGO (AP) — Freddie Freeman homered and had four hits, Dansby Swanson and Nick Markakis also went deep and the Atlanta Braves routed the San Diego Padres 14-1 Tuesday night.
Sean Newcomb and Luke Jackson combined on a four-hitter for the NL East leaders, who unloaded with 18 hits one night after losing the series opener 11-4. The Padres, last in the NL West, were denied their first four-game winning streak of the season.
Newcomb (7-1) allowed only three singles in six innings, and each time the baserunner was erased on a double play. He struck out three and walked four.
Jackson almost got through three hitless innings of relief before allowing rookie Franmil Reyes’ homer with two outs in the ninth, his sixth. Jackson walked two and struck out five in earning his first save.
The Padres turned to infielder Cory Spangenberg to pitch the ninth in his first big league appearance on the mound. He gave up one run on two hits and a walk.
Freeman’s first three hits were off Jordan Lyles (2-2). The slugger hit an RBI double to right field with two outs in the first and a solo homer to right-center with two outs in the third, his 10th. Freeman also doubled to left-center leading off the fifth and scored on Kurt Suzuki’s one-out double that started a five-run rally.
Charlie Culberson hit a two-run double and Swanson followed with a two-run homer, his sixth, to give Atlanta an 8-0 lead.
The Braves scored five more runs in the seventh off Bryan Mitchell. The big hit was Markakis’ three-run homer, his eighth.
Lyles allowed eight runs and 11 hits in 4 1/3 innings.
NICE CATCH
One of the highlights of the night was when a woman caught a foul ball in her beer cup and then chugged the beer.
UP NEXT
Braves: RHP Mike Foltynewicz (5-3, 2.22 ERA) is scheduled to pitch the series finale Wednesday afternoon. He’s 1-0 with a 6.67 ERA in two career starts against San Diego.
Padres: Haven’t announced a starter; it will be a bullpen game.
___
More AP baseball: https://apnews.com/tag/MLBbaseball