Cavs looking to turn around Finals at home 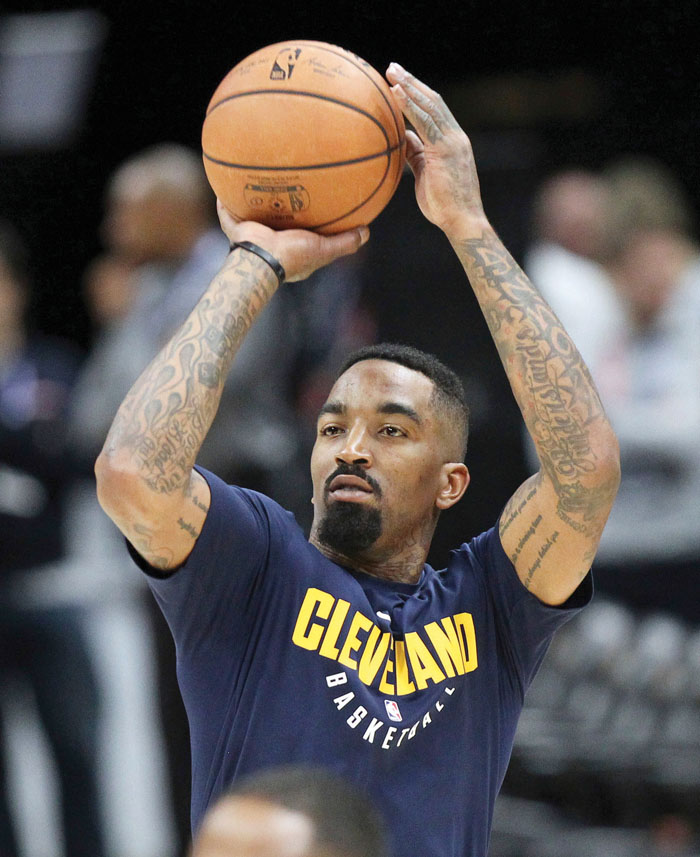 Cleveland Cavaliers guard JR Smith works on his shot following practice Tuesday, June 5, 2018 at Quicken Loans Arena in Cleveland, Ohio. LeBron James and the Cavaliers have spent this strange season in one predicament after the next. And while they've successfully overcome all types of adversity, a 2-0 deficit in the NBA Finals against the Golden State Warriors represents their biggest challenge yet. (Joshua Gunter /The Plain Dealer via AP)

CLEVELAND (AP) — LeBron James laughed as he came around the backstage partition after arriving fashionably late for his crowded, post-practice news conference.

As he stepped onto the podium, back among friendly faces and in the building where he has done some of his finest work, James seemed at ease, almost content. No signs of stress anywhere.

A few reminders about his team’s urgent predicament against Golden State, questions about President Donald Trump and another review of Cleveland’s heartbreaking loss in Oakland swung his emotions.

The Cavaliers may be in a dark place.

For the third time in the past four Finals, James and his teammates enter Game 3 against the Warriors in a win-or-make-summer-vacation-plans situation. After they wasted a 51-point effort by James — with a reversed official’s call, missed free throw by George Hill and bone-headed move from J.R. Smith — and let Game 1 slip away in overtime , and following Stephen Curry’s 3-point barrage in Game 2 , the Cavs are faced with the reality that their season, strange as it has been to this point, is in serious jeopardy.

However, coach Tyronn Lue, who plans to give disappointing forward Rodney Hood playing time on Wednesday night, feels his team can change the complexion of this series.

“We’re very confident we can do that,” Lue said. “The guys are engaged and locked in. Winning tomorrow is a step forward, but then going out with Game 4 also. We’re locked into doing that, and we know we can.

It’s easy to understand Lue’s confidence. After what the Cavaliers have experienced this season, a 2-0 deficit in the Finals against a star-studded Warriors squad on the cusp of being stamped as a modern-day dynasty seems manageable.

Cleveland has endured injuries, trades, tragedy and drama for months. The Cavs, who climbed from a 2-0 hole to beat Boston in the conference finals, have major roster holes and unfixable flaws. There’s no denying their toughness.

“We’ve been very persistent and very resilient throughout this whole season, no matter what has been going on,” James said. “We have an opportunity to come home and protect home, as Golden State has done. It’s a very tall task. A very tough challenge going against these guys, going against this team.”

Teams that have taken a 2-0 lead are 29-4 in the Finals, but the Warriors know better than to be overconfident. They’ve learned the hard way.

Golden State held a 3-1 lead in the 2016 Finals before the Cavs rallied to win three straight and dethrone the Dubs. And last year, the Warriors trailed by six with 3:09 left before storming back to win 118-113 in Game 3.

Cleveland has won eight straight playoff games at Quicken Loans Arena, which may be louder than ever with hometown fans still frothing from some calls that went against the Cavaliers in the Bay Area last week.

Just the sight of Warriors forward Draymond Green should be enough to push the decibel readings inside the building to unsafe levels.

“I don’t really think about being up 2-0 because the series could turn so fast,” Warriors star Kevin Durant said. “It’s a great position to be in. I don’t want to take that for granted; don’t get me wrong. But the job is not done, and you can’t relax or be comfortable when you’re still trying to win this thing. We know coming on the road is going to be tougher.”

The Warriors may have Andre Iguodala back for the first time in the series.

One of the team’s best defenders, Iguodala has missed six straight games with a left knee injury suffered in Game 3 of the Western Conference finals. Coach Steve Kerr said the 34-year-old has improved.

“He’s getting closer, and I’m hopeful that he can play,” Kerr said. “If not tomorrow, then in Game 4.”

While Kerr looked forward, James was forced to take another glance back at Game 1.

On Sunday, uncut TV footage showed James uncomfortably sitting on Cleveland’s bench next to Smith, who inexplicably dribbled out the final seconds of regulation. James was shown asking Lue if the team had any timeouts and then reacting as if he had been punched in the stomach when he learned the Cavs could have stopped the clock.

“Damn cameras,” James joked when asked about the video. “I finally got Game 1 out of my head. You’re taking me back, huh?”

James, who is averaging 40 points, 10.5 assists and 8.5 rebounds in two games, abstains from social media during the postseason. He was unaware the video went viral or that he’s being criticized for not inspiring his teammates.

“Me being criticized? I don’t believe that,” he said sarcastically. “I don’t care at all. I mean, we’re in the NBA Finals. How much more picking up of teammates do you want me to do?”