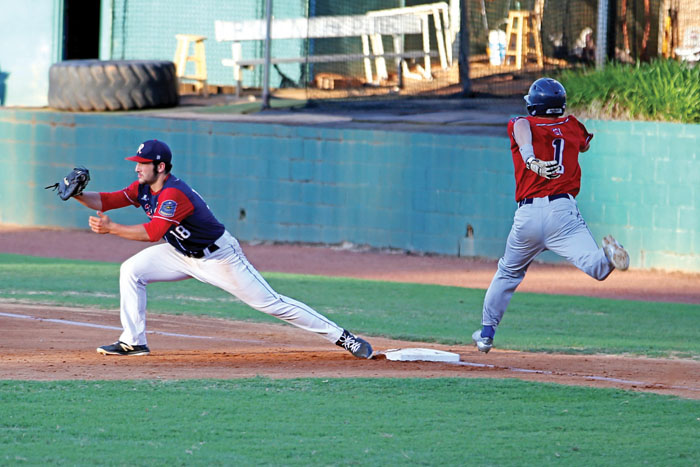 Drawing criticism from the Concord fans on both ends, Rowan first baseman Chandler Lippard completes the double play. Photo by James Sipes, for the Salisbury Post.

“That’s two nights in a row our bullpen has done a great job,” coach Jim Gantt said after Rowan (8-0, 2-0) marked its territory atop the division standings. “That’s how you get to heaven — two-out hits and a good bullpen. It was good to see.”

Stamper earned the spotlight following teammate Maddux Holshouser’s shutdown performance in Sunday night’s 2-0 triumph at Concord. He was summoned with one out in the top of the fifth after starter Hayden Setzer faltered, entering with two runs already across and a runner on second base.

“Well, I hadn’t pitched since the second game of the season,” Stamper said after yielding a pair of doubles and recording three strikeouts. “(Pitching coach Russ) Weiker told me to go down to the bullpen and get hot and be ready. When I came in I tried to relax, hit my spots and let the defense work for me.”

Stamper swept up the fifth-inning mess by fanning Concord’s Grayson Huneycutt and Brett Laws. He worked around a two-out double by Catawba’s Alex Cirino in the sixth and another two-bagger by Connor McGee in the top of the seventh. With two away, he induced Huneycutt to swing through a game-ending pitch in the dirt.

“I thought (Stamper) looked really good,” said Rowan catcher Garrett Alewine. “He hit his spots and did it with more than one pitch.”

Rowan opened the scoring against losing pitcher Chance Daquilla in the last of the first. C.P. Pyle reached on a one-out error and Trevor Atwood followed by hoisting a first-pitch home run over the wall in left field.

“While I was on-deck I was trying to get him timed up,” Atwood said after drilling his second homer. “When I got in there, right away I saw the pitch I wanted. We won this game with key hits then and there, just getting the job done.”

There was still work to do when Cirino jumped on a first-pitch fastball from Setzer and launched it over the wall in left-center, trimming Post 51’s deficit to 3-2 in the top of the third. Daquilla, who pitched as though the plate was low and outside, wilted in the last of the third when Rowan scored four times.

“It does happen fast — and it seems faster when it’s a against a good team like Rowan,” losing coach Jaymie Russ said after Concord (5-4, 0-2) collected 10 hits. “They put runners on base and came up with big hits. That’s great situational hitting. That’s how you win games.”

Rowan used a two-out, two-run single by third-baseman John Owen to go up 5-2 and Alewine’s subsequent two-run single to center to bolster its lead. An inning later Clayton Gilmore coaxed a leadoff walk from Concord reliever Stephen Kutay and crossed when Chance Lippard’s two-out single was played into a run-scoring error.

Setzer earned his second win despite a sub-par outing. He allowed four earned runs on eight hits in 4 1/3 innings — all after working a 1-2-3 first. He hit two batters with pitches and was spelled after yielding McGee’s RBI-double in the fifth. “He didn’t change anything,” Alewine noted. “Sometimes good pitches are better hits.”

“That was uncharacteristic of what I know about Setzer,” Russ said. “He’ll be all right. He’s going to get a lot of people out.”

That’s precisely what Stamper did when his name was called. He recorded an eight-out save and helped Rowan clear an early-season hurdle.

“We’re 2-0, but we’ll need to come out tomorrow and be better,” Alewine said after driving in three runs. “You always want to be taking steps forward.”

NOTES: Rowan hosts Cherryville in a nine-inning non-leaguer tonight. … Every batter in Rowan’s lineup — including pinch-hitter Cameron Graham — reached base at least once. Pyle went 1-for-3, scored twice and got on base three times. … Newman Park will get a slight makeover today when new sod is placed in the area behind home plate. … Russ, a former minor league pitcher in the Marlins and Red Sox organizations, sported an altered look in the Concord dugout. He got his first haircut in two years last Wednesday, eliminating 12 inches of locks.