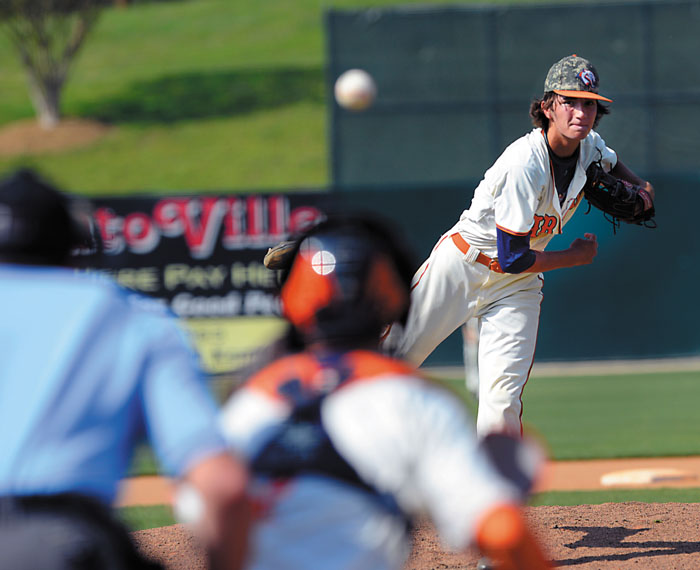 Carson’s Owen White pitches during a game against Salisbury on April 14, 2017. White was selected in the MLB draft by the Texas Rangers on Monday night as the 55th overall pick. photo by Wayne Hinshaw, for the Salisbury Post

MOUNT ULLA —  The White household in Mount Ulla, about 12 miles outside of Salisbury, was the site of a Carson High graduation party on Monday.

There turned out to be even more to celebrate than caps, gowns and diplomas. At about 11:15 p.m., more than four hours into the MLB draft, Owen White, Carson’s ace pitcher heard his name called.

“We had about 150 people over here,” White said. “It was a big graduation party, but it also turned out to kind of a draft party, too. Everything worked out for the best. I was in and out all night, but I was definitely following the draft the whole time. I know Jordyn Adams (a Cary youngster who was the No. 17 pick) pretty well.”

White is a second-round pick, the No. 55 selection overall by the Texas Rangers. That’s where he was projected to go. All the analysts had him being drafted somewhere between No. 50 and No. 75.

The approximate value of the No. 55 pick in terms of dollars is $1.3 million.

The last time a Rowan County youngster was a high draft pick out of high school was East Rowan shortstop Cal Hayes Jr. in 2002. Hayes, the 102nd pick, a third-rounder by the St. Louis Cardinals, signed for $400,00.

Daniel Moore, a late-round pick by the Florida Marlins out of North Rowan in 2000 didn’t sign out of high school. A lefty pitcher, he went on to UNC and was a second-round pick in 2003 by the San Diego Padres. He received a signing bonus of $800,000.

White could be the first million-dollar Rowan signee, but there will be some negotiating. He has options. He’s signed with the University of South Carolina, and the Gamecocks have told him he’ll have a chance to compete for the shortstop position as well as pitch at a top-notch program. That’s important for White, who would love to keep swinging a bat. Three years from now, he might be a first-round pick, although staying healthy for three years as a frontline college pitcher may be a challenge.

The 6-foot-3 White has set Carson career and season records as both a pitcher and a hitter, while playing a dynamic shortstop when he’s not on the mound. He helped himself frequently as a tremendous fielder on bunts and with a lightning pickoff move.

He was a winner, part of outstanding teams as a senior. A first team all-county basketball player for coach Brian Perry, he helped Carson take trophies this year in hoops as well as baseball.

A dream-come-true senior year peaked for White on Monday night.

“Following the draft for all those hours wasn’t nerve-wracking or frustrating or anything like that,” White said. “There wasn’t anything negative about it. I knew it would probably be the Pirates, the Royals or the Rangers. Right before the Rangers picked me, my advisor called and said, ‘Hey, get ready. This is it.’ And then they picked me. It was really exciting. This night probably was better than any ballgame I ever played in.”

White, an All-American in showcase baseball against some of the nation’s best, has been a virtual rock star this season, with a small army of scouts following every pitch, but he’s managed to stay humble and appreciative throughout a process that had to be daunting for an 18-year-old.

This night has been coming for a while. As an eighth-grader, White was playing shortstop for the South Rowan American Legion team — and excelling against players four or five years older.

His life has reached a crossroads. High school is behind him now, and either big-time college baseball or pro baseball is in his future.

“I thank God and I thank my family, my teammates and my coaches for getting me to this point,” White said. “This is amazing, just a great opportunity, and I’m so grateful for it.”