Truex pulls away on final restart to win at Pocono Raceway 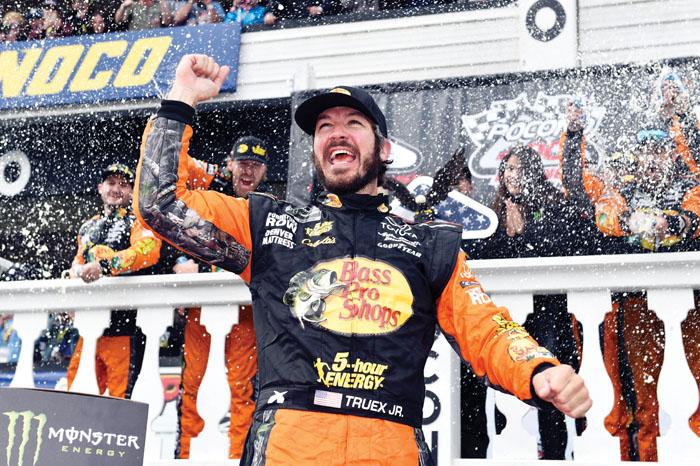 LONG POND, Pa. (AP) — Martin Truex Jr. had his car parked on the White House lawn and was feted with a day in his honor in his home state of New Jersey. Nearly seven months after winning his first NASCAR Cup championship, Truex’s whirlwind victory tour remains on a barnstorming schedule.

“It just kind of reminded us of how big a deal it is to win a championship in this sport,” Truex said.

Lost in the shuffle in a season where Kevin Harvick and Kyle Busch have turned the Cup Series into a two-driver show, Truex came to Pocono and gave the field a reminder that he’s still a driver to beat in the championship race.

Truex stayed out on pivotal caution late in the race to take the lead, then pulled away off a restart with seven laps left to win Sunday at Pocono Raceway and thrust himself into title contention.

“Just happy today that things kind of went our way a little bit for once,” Truex said.

Truex said it with a straight face, as the 37-year-old Furniture Row Racing driver is still having the type of season that — oh, all but two drivers — would love to produce. He won the fifth race of the season at Fontana and had runner-up finishes in each of the last two races headed into Pocono where he won his first race for FRR in 2015 and launched his journeyman-to-champion career metamorphosis.

Still, Busch and Harvick had made a habit of collecting checkered flags; the two former Cup champions combined to win nine of the first 13 races. And each driver spent enough time in front — Harvick led 89 laps; Busch 13 — that a one-two finish at Pocono seemed almost certain on the 21/2-mile track.

Truex and Harvick each stayed out on a caution with 20 laps left in the race. Busch made a pit stop and surrendered the lead to Truex. Truex then held off a hard-charging Kyle Larson down the stretch and showed he’s still a threat to win his second straight title.

“We couldn’t get back up through there for anything back up to those guys,” Busch said.

The Harvick-Busch-Truex champions trio have won 10 of 14 races.

“I think three of those guys are definitely head-over-heels better than the rest of us,” Larson said.

Larson was second, followed by Busch and Harvick. Brad Keselowski was fifth.

But Pocono belonged to Truex and he won his 17th career Cup race.

“I hope they got a lot of Yuengling in victory lane,” he said over the radio about the Pennsylvania brewery. “We’re going to drink it all!”

He had it sprayed on him instead in victory lane.

“I feel like we’re getting back to what we were doing last year,” Truex said. “It’s always fun to win, especially when you beat the best guys out there.”

Truex, who had two wins at this point last season before he took off and won six more, celebrated with his longtime girlfriend Sherry Pollex. Pollex was a fixture in victory lane last season but scaled back her travel schedule as she continues her battle with ovarian cancer.

“I think more than anything, she was happy she picked the right one to come to,” Truex said, smiling.

She was by his side three weeks ago when they were both honored on the South Lawn of the White House. Truex, a Mayetta, New Jersey native, was honored last week by Gov. Phil Murphy and he declared May 31 as Martin Truex Jr. Day.

Truex has had little time off as he bounces from one honor to the next.

“Honestly, as crazy as it’s been, it’s been a lot of fun,” he said. “I’ve gotten to do a lot of cool stuff. Going to the White House was amazing and to get to meet the President and get the tour and the way he treated our team really made us feel special.”

With more race like Pocono, Truex may get to do it again.

In the stunning stat department, seven-time Jimmie Johnson led his first laps of the season in the first stage. Johnson, who led as many as 2,238 laps in a season in 2009, was in first for the first time since Martinsville in the 33rd race last season.

Johnson finished eighth and extended the longest losing streak of his career to 37. It’s been a year since he last won — June 4, 2017, at Dover.