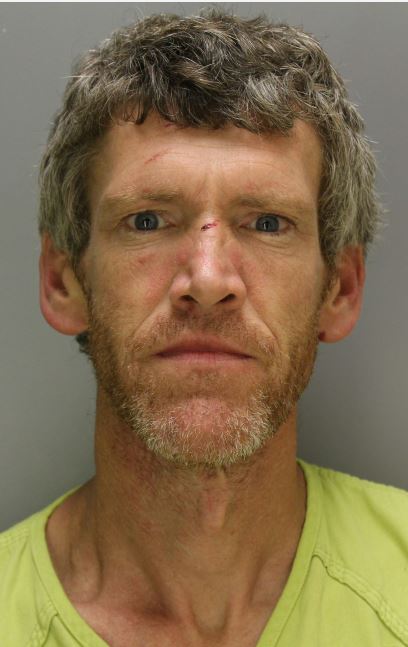 Authorities are looking for Chad Hinson.

CONCORD — Cabarrus County authorities are looking for an armed man who tried to rob a landscaper and took the worker’s truck near the Cabarrus-Rowan line.

The man is considered armed and dangerous.

Around 11:23 a.m. Monday, the Cabarrus County Sheriff’s Office received a 911 call from an individual reporting an armed robbery on Fox Chase Drive in the Park Creek subdivision.

Deputies who responded to the call spoke to witnesses who said a man approached a landscape crew member working in the neighborhood, offered him a bottle of water and then brandished a handgun. Pointing it as the worker, the man demanded everything the worker had.

The worker ran, and the suspect stole the landscape crew’s truck, which deputies found abandoned in the same neighborhood. The suspect had fled on foot.

Witnesses described the man as being in his late 40s with curly, partially gray hair, wearing a burgundy sleeveless tank top and blue jean shorts.

Cabarrus County detectives identified the suspect as Chad Kendrick Hinson, based on vehicle registration, identification left at the scene and witness statements.

Deputies canvased the area and conducted several canine tracks but were unable to find the suspect.

Authorities seized the 1995 Toyota Tacoma that Hinson had been driving, South Carolina registration plate MWX-182, along with several other items.

Warrants for Hinson were being obtained, charging him with armed robbery and larceny of a motor vehicle.

As of Monday evening, Hinson was still at large, last known to be fleeing on foot in the area of Fox Ridge Circle (Park Creek subdivision) near the Cabarrus/Rowan County line. Hinson could still be armed and should be considered armed and dangerous, according to a press release from the Cabarrus Sheriff’s Office.

Anyone who sees the suspect or has information to provide should contact the Cabarrus County Sheriff’s Office at 704-920-3000 or your local law enforcement agency.