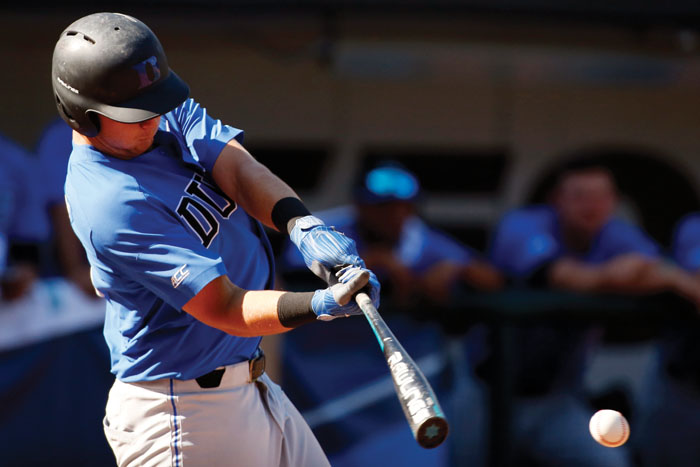 The second-seeded Blue Devils (41-16) trailed 8-5 before putting together their huge inning, which included two-run singles from Chris Proctor, Max Miller and Chase Cheek.

Duke had lost to Troy on Friday and trailed 8-1 before Saturday’s game was stopped for roughly 90 minutes in the sixth inning due to lightning.

It was Duke’s first win in the NCAA Tournament since 1961, with 2016 marking their only other appearance since that win.

Jeff Hahs and Christian Jones each hit homers for the fourth-seeded Camels (35-26), who had lost to regional host Georgia earlier Saturday.

The Tar Heels (40-18) beat North Carolina A&T on Friday and are a win away from advancing to the super regionals as the regional host.

Tyler Bielamowicz hit a home run in the fifth inning for the third-seeded Cougars (37-24), who trailed 4-2 entering the bottom of the ninth. Joe Davis hit a solo homer to cut the deficit to 4-3, but UNC’s Josh Hiatt struck out Cooper Coldiron to end it.

Houston beat Purdue on Friday and faces the second-seeded Boilermakers in an elimination game Sunday.

N.C. State, the No. 16 national seed and regional host, lost Friday to Army. But the Wolfpack (41-17) responded with a fast start behind Bailey, who hit a two-run homer in the first inning then added a three-run shot in the fifth.

Brian Brown (7-2) earned the win with a complete-game performance, allowing eight hits while striking out eight.

Scott Holzwasser and Jeff Costello hit homers for the third-seeded Huskies (36-21), which lost Friday against Auburn. Northeastern trailed 6-0 in this one and managed just one run through the first seven innings.

GREENVILLE (AP) — Kep Brown had a walkoff RBI single through the right side in the 13th inning to help UNC Wilmington beat Ohio State 4-3 in Saturday’s elimination game at the NCAA Tournament’s Greenville Regional.

Brown’s hit scored Noah Bridges for the fourth-seeded Seahawks (38-22), who needed a run-scoring single from Mason Berne in the bottom of the 11th before there was a lightning delay of more than 90 minutes.

Brown finished with four hits for the Seahawks, while Blake Morgan (2-1) earned the win with an inning of relief work. UNC Wilmington finished with 19 hits.

Jacob Barnwell hit a home run for the third-seeded Buckeyes (36-24), who led 3-2 on Noah West’s RBI single in the top of the 11th inning.

Ohio State had just five hits for the game.

TALLAHASSEE, Fla. (AP) — Elijah MacNamee hit a three-run homer to left field with two outs in the ninth, and Mississippi State beat Florida State 3-2 on Saturday to eliminate the No. 7 national seed from the NCAA Tournament’s Tallahassee Regional.

Jake Magnum and Hunter Stovall got on via walks before MacNamee hit a 1-2 pitch from Florida State’s Drew Parrish off the scoreboard. Parrish had blanked the Bulldogs for the first eight innings but came out for the ninth despite a 2½-hour rain delay after the eighth.

Parrish, a sophomore left-hander who fell to 5-1, allowed four hits, struck out eight and walked two in 133 pitches, with 93 being strikes.

Mississippi State (32-26) will face the Oklahoma-Samford loser on Sunday. The Seminoles finish the season 43-19.

Nick Derr got Florida State’s first run in the third when he doubled, advanced to third on a wild pitch and scored on a throwing error by Mississippi State catcher Marshall Gilbert. The Seminoles added a run in the fifth when Rhett Aplin’s single drove in J.C. Flowers.

CLEMSON, S.C. (AP) — Connor Kaiser’s RBI single broke a 3-3 tie in the fifth and five Vanderbilt pitchers held regional host Clemson to two hits over the final seven innings for a 4-3 victory in the NCAA Tournament on Saturday night.

It was the second straight season the Commodores (33-25) won a winner’s bracket matchup against the Tigers on their home field on their way to winning the regional.

Vanderbilt needs only to defeat either the Tigers or St. John’s on Sunday night to advance.

Clemson opened a 3-0 lead with four hits, including three that scored runs, through the first two innings. That’s when Vanderbilt’s pitchers took over, permitting just two more hits the rest of the way.

Vanderbilt’s final pitcher, Chandler Day, got Atlantic Coast Conference home run leader Seth Beer on a fly out to center with a runner on in the ninth to end the game.

The second-seeded Tigers (41-21) led just 1-0 before a nine-run fifth inning, which started with Anthony and Holland hitting consecutive homers.

Starter Casey Mize (10-5) took the win, allowing four hits and one run with 11 strikeouts in seven innings of work.

Auburn beat third-seeded Northeastern on Friday and is one win away from advancing to the super regionals.

Jon Rosoff had two hits and drove in the only run for fourth-seeded Army (37-23), which beat regional host and No. 16 national seed North Carolina State on Friday. The Black Knights meet the Wolfpack again on Sunday in an elimination game.

Jutanugarn shoots 67, climbs into lead at US Women’s…