The weight they carry: A look at the teaching profession 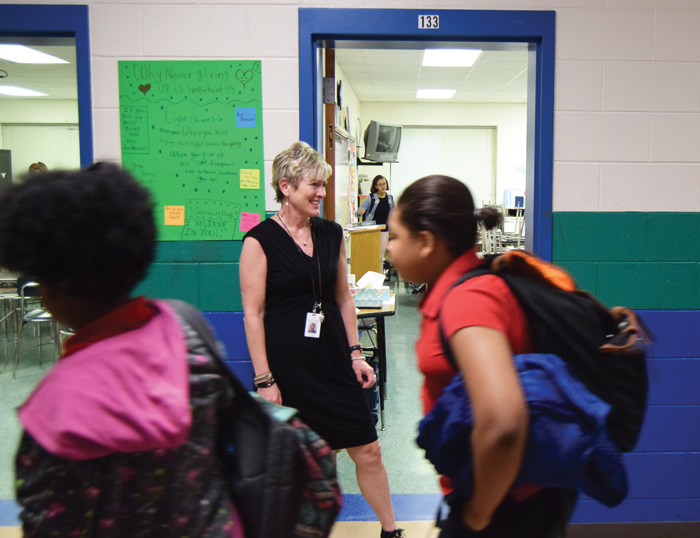 Editor’s note: This is the first in a three-part series which will run Sunday, Tuesday and Thursday.

SPENCER — Angelia Fleming wakes up before the sun. Her alarm goes off each morning at 5 a.m.; by 6 a.m., Fleming is on the road, driving to her job at North Rowan Middle School.

When the bell signaling the start of school rings at 7:30, Fleming’s door will have been open for nearly an hour. Arriving to school and unlocking her classroom so early isn’t a requirement, but Fleming does it because she knows a few of her students prefer the quiet safety of the classroom to the noisy chaos of the early-morning gym.

Losing sleep or moments lingering over morning coffee are two of the many things Fleming and other teachers sacrifice for the good of their students.

“I think most people recognize that teachers take home papers at night to grade … after what people would consider traditional working hours,” Rowan-Salisbury Schools Superintendent Dr. Lynn Moody said. “What they don’t often understand is the weight a teacher carries.”

In addition to covering content, teachers serve as emotional support for students and as guiding lights in times of turmoil and uncertainty. They wake up before dawn and burn the midnight oil. Teachers are held responsible for student learning, behavior, nutrition and emotional and mental wellbeing.

Sometimes, Fleming confessed, the weight of all those expectations is backbreaking. “It’s very overwhelming.”

According to the North Carolina Department of Public Instruction, roughly 50 percent of teachers who left Rowan-Salisbury Schools last year left for personal reasons — a category that includes dissatisfaction with the teaching profession and career changes, along with relocation and childcare. Half of the 8,249 teachers in the state who left teaching in the 2016-17 year listed the same — 327 of them because of dissatisfaction or career change.

On May 16, thousands of teachers from across the state flooded the legislative sector of Raleigh to call for better conditions, higher pay and some respect.

“The bigger picture is the honor of the profession,” Moody said.

According to Moody, teachers are often burdened with a “laundry list” of requirements from non-educators — from testing to recent debates about allowing teachers to carry guns.

“Every time something happens in society, the result of that is to add one more thing to the plates of teachers,” she said. “…We haven’t taken anything off teachers’ plates, we’ve just continued to add on.”

Teachers participating in the May 16 rally said teaching was their passion, but felt that they would be forced to leave education unless something changed. But it’s not easy to walk away from a calling.

The 2017-18 year marked Fleming’s 10th as a teacher, but she says it was a purpose she stumbled into.

But life has a funny way of throwing curveballs. Fleming left her steady job as a CPA after she had her first child; when her children entered school, so did she.

Soon, she was hooked.

“I just really liked working. It became something fun to do,” she remembers.

Fleming became a lateral entry teacher — working in the classroom during the day and taking courses through the University of North Carolina at Greensboro at night.

While the first year was the most difficult, teaching never became easy — a misconception Fleming runs into on almost a daily basis. When people tell her she’s got it made because she gets summers off, Fleming winces.

“There’s rarely a week that I don’t do something school-related,” she said of her summers.

Even during the school year, her job doesn’t end when she walks out the door.

“I don’t ever leave early, I guess,” she said with a laugh.

Sometimes, Fleming attends meetings, games or school events. Sometimes, she goes home and picks up where she left off.

Curled up on her couch with her district-issued laptop, and dog, Pippin, by her side, Fleming will work late into the evening planning lessons and field trips, writing papers and articles or applying for grants.

“I always have school projects to work on,” she said. “but I try not to take grading home.”

She even has Saturday mornings blocked off for school-related work.

Those projects were only possible because of the hours Fleming put in after the end of the school day — hours she doesn’t get paid for.

According to a biannual survey on teacher working conditions conducted by the North Carolina Department of Public Instruction, more than 51 percent of North Carolina teachers spend between five to 10 hours on school-related work or activities outside of the regular school workday. In Rowan-Salisbury Schools, it’s 53 percent. An additional 24 percent say they spend at least three hours, but less than five, on outside work.

“There’s not enough time. There’s always more I want to do,” Fleming said.

And in the back of every teacher’s mind, the dark specter of testing looms large.

Preparing for testing also takes up valuable time. On a quiet afternoon in Fleming’s class, seventh-grader Jordan Feaster adds the days together — including EOGs, benchmark assessments and others.

In an uprising chorus of objections, the class wonders what the point is.

While schools are slowly moving away from using standardized tests as a yardstick to measure a teacher’s skill, there’s still a lot of emphasis placed on them. Some would say too much.

“I don’t know if that’s preparing them for real life careers,” Fleming said.

Tests do set a standard, ensure students are learning the proper material and help teachers track important data — but they can also undo months of careful work.

Like many other teachers, Fleming puts effort into personalizing lessons and tailoring activities to each students’ strength and learning style.

In her class, students are up and moving. They play games, they carve totem poles and make masks. They read aloud and discuss and test each other’s knowledge. But come test day, the only option is to read a  passage that has been removed from its context and choose A, B, C or D.

“They shut down,” Fleming said.

When scores come back, Fleming prepares for tears.

“It hurts our children, as far as our low ones,” she said. “That’s how they see themselves — as that one or that two. … Some of them have a hard time seeing that they are more than just that.”

Moody agreed, saying that tests don’t measure a student’s patience, resilience or ability to be a team player, nor a teacher’s ability to create curriculum or inspire passion.

“The conversation across the nation has been about testing and standards, and very little about being a good citizen,” she said. “And I think those things are just as important as academic measures.”

Fleming does her best to encourage her students, but somedays it’s an uphill battle.

Still, she tries. After all, that’s what being a teacher is all about.

And when naysayers complain about test scores, or try to hold her students to a standard, Fleming challenges them to spend a day in the classroom — to meet her students, to see her teach.

“My goal hasn’t ever been their EOG test score,” she said. “It’s that (students) feel welcome and accepted, and that I challenge them to learn so that they can see what they can do. … Life is a lot more than reading a passage and answering those questions. How are you going to use that? How are you going to challenge our youth to think and interact and create? … This student is a person. They’re an individual, and they’re more than just that test score.”

After all, the classroom may be where the magic happens, but the students are the magicians.