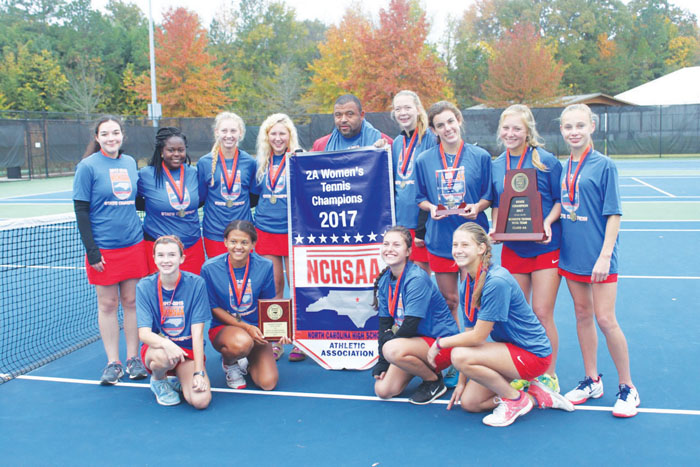 Leah Ann Honeycutt/for the Salisbury Post ... Salisbury’s girls tennis team was Rowan County’s only state champion for the 2017-18 school year. Salisbury defeated Barlett Yancey, 5-0, for the 2A title on Nov. 4.

It’s being called the Year of the Cougar — and that’s true enough.

But it was also the Year of the Hornet.

Taking a look at the 21 varsity sports in which Rowan County teams competed during the 2017-18 school year, from the heat of August to the drenching rain of May, Carson was the county’s best in eight sports and was runner-up in five more. Salisbury can claim six county titles, plus three runner-up teams.

Carson’s volleyball team won two out of three against its closest challenger, West Rowan, and had the county’s best record (23-5).

The Sam Moir Christmas Classic winner doesn’t produce an automatic county champ, but it does provide an opportunity for the county’s best in basketball to go head-to-head. Carson’s boys won the championship game against Salisbury, 67-65,  on Jailen Williams twisting layup with 4.5 seconds left. That shot was the narrow margin between two terrific teams. Both won championships and enjoyed dominant regular seasons. Carson rolled in the playoffs until it ran into eventual 3A champ Cox Mill. In 2A, Salisbury reached the state’s Final Four. Between them, they won 53 games.

Carson’s basketball girls were champs, as well, taking the Christmas tournament and going 4-0 against a 21-8 West Rowan team.

Carson was the county’s best in baseball, proved it in the regular season and the North Piedmont Conference tournament, and again in the playoffs, making it to the fourth round. East Rowan knocked off Carson once. The Mustangs were good, probably a little better than the Salisbury Hornets.

In softball, Carson won two out of three against West Rowan, the second-best team. Then the Cougars added an inspiring playoff run all the way to the West championship series, showing they were not only the county’s best, but one of the state’s best.

Finally, Carson’s girls get the nod as the top team in indoor track and field. Thanks to Mikaila Gadson, Carson did better at the state level than anyone else.

Salisbury had another exceptional sports year, capping it in recent weeks when its girls soccer team and boys tennis team were Final Four squads in 2A. Matt Parrish’s soccer girls simply put up the best season in county history. Milton Griffith’s tennis guys were an eyelash from making it to the state final.

In the fall, Salisbury was the county’s best in boys soccer and girls tennis. Griffith’s tennis girls enjoyed a phenomenal season and seized the county’s only team championship of the school year in Burlington back in November.

West also gets the nod as county champ in boys indoor track thanks to Jalen Houston’s efforts in the state meet.

In football, it’s a little complicated as the county didn’t have a really outstanding team and nobody won a playoff game. But West did go 4-0 against county opponents. West didn’t play Salisbury, but West handled North Rowan by two touchdowns and North beat Salisbury, 42-15, on opening night. It’s hard to argue the Falcons weren’t the best.

More county tournaments to officially settle bragging rights would be helpful and would stir interest. A county girls tennis tournament is planned for next fall.