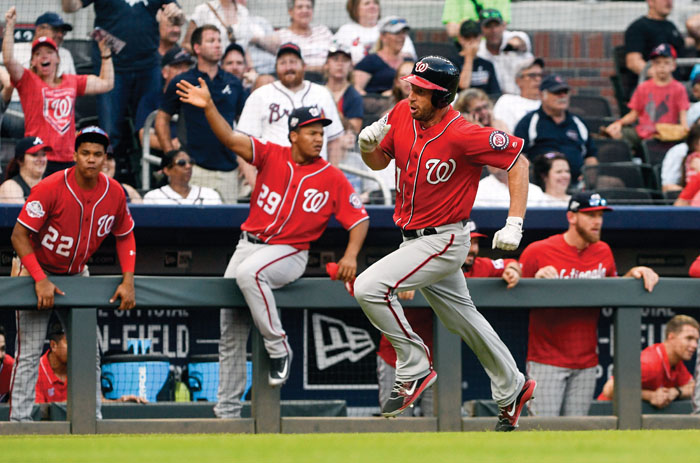 Washington Nationals' Max Scherzer runs to home plate to score on a line drive hit to center field by Wilmer Difo during the fourteenth inning of a baseball game against the Atlanta Braves, Saturday, June 2, 2018, in Atlanta. (AP Photo/John Amis)

Now he’s delivered one with his bat, too.

Scherzer singled as a pinch hitter in the 14th inning and scored the tiebreaking run on Wilmer Difo’s triple, sparking the Washington Nationals to a 5-3 victory over the Atlanta Braves on Saturday.

“For me to get in a tie game at a point and time where we needed to win against a team that’s playing really good baseball, I got an opportunity,” he said. “Holy cow. I got a hit and scored a run. That’s too cool. I never thought in a million years it would happen.”

In his third big league pinch-hit appearance, Scherzer singled up the middle against Miguel Socolovich (0-1) and sped home from first base on Difo’s two-out hit to right-center field. Spencer Kieboom added an RBI single.

Scherzer touched off a dugout celebration after he scored.

“I just screamed,” Scherzer said. “I didn’t say any four-letter words. I’m usually pretty good for that — at least one, two, three or four of those — but I kept it pretty PG. That was a good outburst.”

Justin Miller (2-0) struck out five in three innings, facing the minimum, and Sean Doolittle got three straight outs for his 14th save in 15 chances. Washington’s bullpen has allowed two earned runs in its last 33 innings.

Jesse Biddle, the fifth Atlanta reliever, struck out eight of his 13 batters, including Juan Soto with the bases loaded to end the 11th. He walked two in three innings.

“It was good to see,” Braves manager Brian Snitker said. “A lot of these guys work their way up the ladder. It’s games like that when you start giving him a little more high leverage situation.”

Nationals starter Gio Gonzalez faced the minimum through four innings, striking out five, before Nick Markakis’ leadoff single in the fifth. Tyler Flowers singled and Johan Camargo homered for a 3-2 lead, his third homer this week and fifth this season. Soto tied the score with a seventh-inning homer off Sam Freeman.

Michael Taylor hit a two-run homer in the seven off Brandon McCarthy, who allowed four hits in six innings. McCarthy struck out seven and retired 15 of his final 17 batters.

Scherzer started getting ready to hit in the ninth, putting on his spikes, hitting off a tee and taking batting practice indoors. He estimated it’s been “a couple of years” since he scored from first.

“I’m not going to hit the ball out of the ballpark,” Scherzer said.  “I know that. I’ve got a high school swing. I know it, but hey, it’s good enough to get the ball in play and sure enough, something happens. With two outs, with the ball in the gap, you’ve got to score. Sure enough that’s what happened.”

Braves 1B Freddie Freeman winced while on a first-inning strikeout. He flexed his left wrist a few times before the start of the second. Freeman missed seven weeks last year after breaking his left wrist when hit by a pitch. He was hit again April 19 against Philadelphia but was back in the lineup the next night.

Tanaka (7-2) allowed four runs and eight hits with seven strikeouts and one walk over 5 1/3 innings. He is 5-0 in seven road games this season — the best stretch of his career. Brett Gardner had a pair of leadoff doubles and scored a run for the Yankees, who have won four consecutive games.

Adam Jones, Joey Rickard and Manny Machado hit solo homers for the Orioles, who scored more than three runs for just the second time in 14 games.

HOUSTON (AP) — Andrew Benintendi and Christian Vazquez homered during a three-run seventh inning that lifted the Boston Red Sox over the Astros.

Former Cy Young Award winners Justin Verlander and David Price each pitched six innings before handing off to the bullpens. Will Harris (1-3) allowed the homers to Vazquez and Benintendi in the seventh, setting up Price (6-4) for a victory.

Craig Kimbrel earned his 19th save by striking out two during a scoreless ninth.

Verlander allowed two runs, three hits and two walks while striking out six. He had earned AL Pitcher of the Month in May with an 0.86 ERA in six starts.

Pederson turned in his fifth multihomer game and first since Sept. 10, 2016, at Miami. He also doubled and singled to tie a career high with four hits.

Kemp kept up his torrid hitting against Colorado by lining a cutter from reliever Bryan Shaw (2-4) for a two-run homer to break open a tight game. Kemp leads all active players with 44 homers against the Rockies. That wasn’t all from the Dodgers outfielder: He threw out Charlie Blackmon at the plate in the first inning when Blackmon tried to tag up on a fly.

CHICAGO (AP) — Jhoulys Chacin combined with two relievers on a five-hitter, and the Milwaukee Brewers backed him with four home runs in a victory over the White Sox.

Chacin (4-1) pitched three-hit ball over 5 2/3 innings and the Brewers won for the sixth time in eight games. The NL Central leaders also picked up a rare victory over the White Sox after dropping 13 of their last 16 against them.

Josh Hader got four outs. Taylor Williams retired all three batters in the eighth and escaped a second-and-third jam in the ninth. He retired Tim Anderson on a pop fly and got Omar Narvaez to foul out before striking out Daniel Palka to preserve the shutout.

ST. LOUIS (AP) — Kolten Wong led off the bottom of the ninth inning with a home run off Richard Rodriguez, giving the Cardinals a win over the Pittsburgh Pirates.

Austin Meadows had tied the score in the top half with a home run off Bud Norris (2-1), who blew a save for the first time in 12 chances.

Wong homered on a slider from Rodriguez (1-2), his second game-ending homer this season and the fourth of his big league career. Pittsburgh lost for the sixth time in eight games and has lost four of its last five games against the Cardinals.

Marcell Ozuna homered in the second, the 100th of his career and first in 105 plate appearances at Busch Stadium with the Cardinals. Colin Moran tied the score in the fifth with his first home run since May 22, connecting on a changeup from Luke Weaver.

KANSAS CITY, Mo. (AP) — Jorge Soler hit a tiebreaking home run in the eighth inning, and the Royals bounced back after wasting a four-run lead to defeat the Oakland Athletics for their third win in four games.

Soler hit his ninth home run on a curveball from Yusmeiro Petit (2-2) with an 0-2 count. Kelvin Herrera pitched a perfect ninth for his 13th save in 14 chances.

Dozier hit an RBI triple in the third inning against Trevor Bauer (4-4), right before Rosario’s 10th homer of the season. Dozier added an RBI double during a four-run sixth that was fueled by a fielding error on second baseman Jason Kipnis.

DETROIT (AP) — John Hicks’ two-run single in the eighth inning broke open a tie game and the Tigers went on to beat the Toronto Blue Jays.

Miguel Cabrera singled off Seunghwan Oh (1-1) with one out in the eighth, and was replaced by pinch-runner Victor Reyes. Victor Martinez followed with a ground-rule double to left-center and Ronny Rodriguez ran for him.

The Blue Jays intentionally walked Niko Goodrum to load the bases, bringing up Hicks. After striking out in his first three at-bats, he fouled off the first five pitches before looping a two-run single over the head of second baseman Devon Travis. JaCoby Jones added a sacrifice fly to make it a three-run game.

Louis Coleman (3-0) picked up the win with a scoreless eighth, while Joe Jimenez pitched the ninth for his first career save as Detroit won its fourth straight. The Blue Jays have lost five straight.