Greens of envy: Putting surfaces at Warrior getting major makeover 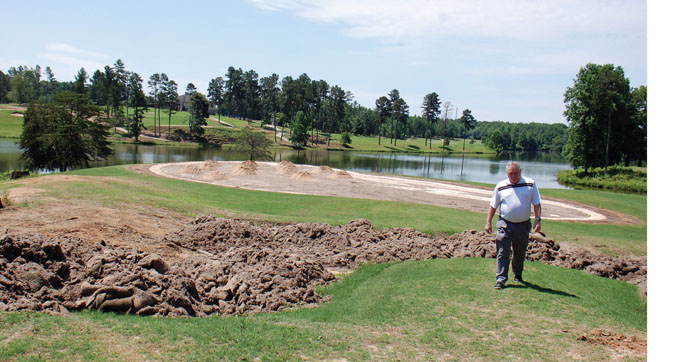 Mark Wineka/Salisbury Post Rick Hoston walks beside the renovations happening on the No. 16 green at Warrior Golf Club in southern Rowan County. Warrior has begun a million-dollar green renovation over the whole course that is replacing its bentgrass with Champion ultradwarf Bermuda grass.

CHINA GROVE — A major renovation project is underway in southern Rowan County this summer. When it’s over, it’s going to make a lot of golfers happy.

The Warrior Golf Club at 890 Lake Wright Road (off N.C. 152) closed Tuesday to begin an almost 10-week, $1 million renovation of its greens. The undertaking means the Warrior course will be closed to the public until Aug. 1, although a special preview will be offered some members during the last week of July.

The pro shop and driving range are still open.

On the course’s 20 greens — the 18 holes, plus practice putting and chipping greens — owners are replacing the original A-1 bentgrass with Champion ultradwarf Bermuda grass.

Southeastern Golf of Tifton, Ga., which built the course 20 years ago, has returned to do the first phase of the renovations. Its crews were expected to wind up their work today. They essentially strip every green, going an inch down and replacing it with a new inch layer of sand and aiming for the needed filtration rate.

Some 600 tons of sand are being used in the process.

The greens are then sprayed and covered for a week to address weeds, bacteria, fungi and nematodes. A crew later adds nutrients and fertilizer. On June 15, Champion Turf Farms of Bay City, Texas, arrives with a refrigeration truck carrying all the sprigs of ultradwarf Bermuda grass.

The springs are rolled into the greens to create contact with the soil. The greens are rolled constantly and watered heavily. The growth period takes five weeks.

“It needs heat and water, so it’s the right time of year,” says club professional Brian Lee, who also is part of the ownership with the families of Gerald Staton and Rick Houston.

In addition, the greens will have collars of latitude Bermuda that helps keep the regular Bermuda from encroaching.

Several other things have occurred or will be happening as part of this project. The slopes on some greens will be reduced because the new ultradwarf Bermuda will lead to faster surfaces.

A couple of sand traps will be restored and a couple of others will be eliminated.

A new pump station and irrigation system have been installed.

The club also has a new line of Club Car golf carts with GPS apps.

Houston says some 2,000 trees around the course already have been removed to help in making sure the new greens get the heat and sun they need. Beyond their normal mowing duties, the Warrior Golf Club crews have been busier handling all the trees and vegetation that have been cleared.

The advantages of going to the ultradwarf Bermuda are numerous for both the club owners and its members and guests.

Players will find the new greens to be faster, smoother and larger, meaning bigger targets to shoot for. Because of encroaching Bermuda, some of the original greens had shrunk up to 50 percent of their size from when the course opened in 1999.

For the club itself, the needed renovation is taking place a lot faster than other options, meaning the course doesn’t have to be closed so long. Once in place, the new greens also will give players an extra month and a half of golf each year.

In terms of maintenance, the greens only have to be aerated once a year (in the summer), not twice (spring and fall) as with the bentgrass. That’s another plus for players.

The new Bermuda grass is more adaptable to a climate that the owners think has changed somewhat in the past 20 years. In colder weather, the Bermuda greens will go dormant and be less susceptible to disease.

“A lot of courses already have made the switch,” Lee says.

The Quail Hollow course in Charlotte has the ultradwarf Bermuda, as does Eagle Point Golf Club in Wilmington.

From its championship tees, Warrior Golf Club is a par-71, 6,609-yard course.

The Warrior owners are excited about the future. Though the green renovations are a huge investment, they say, members and guests will notice a better product and a better golfing experience.