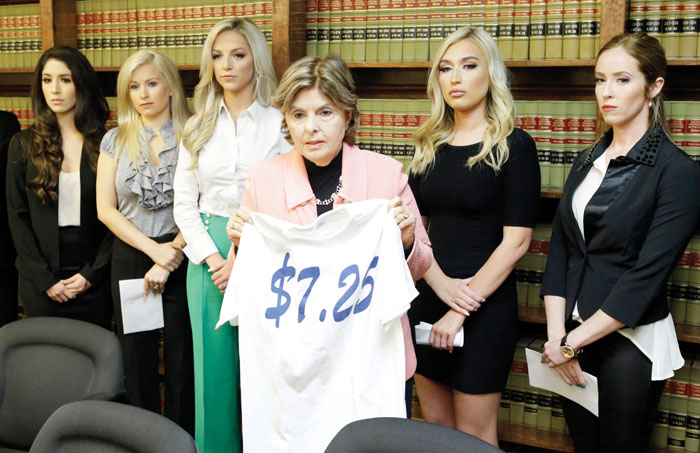 Attorney Gloria Allred stands among former Houston Texans cheerleaders, from left, Ashley Rodriguez, Morgan Wiederhold, Kelly Neuner, Hannah Turnbow, and Ainsley Parish, right, while holding up a shirt printed with $7.25, the amount she says the former cheerleaders where paid per hour, as she speaks during a press conference Friday, June 1, 2018, in Humble, Texas, announcing a lawsuit on behalf of the five the former cheerleaders at the law offices of Kimberley Spurlock. The five former cheerleaders are suing the NFL franchise, alleging the team failed to fully compensate them as required by law and subjected them to hostile work environment in which they were harassed, intimidated and forced to live in fear. (Melissa Phillip/Houston Chronicle via AP)

HOUSTON (AP) — Five former NFL cheerleaders sued the Houston Texans on Friday, alleging the team failed to fully compensate them as required by law and subjected them to a hostile work environment in which they were harassed, intimidated and forced to live in fear.

The lawsuit, filed in Houston federal court, accuses the franchise of paying the women less than the $7.25 per hour they were promised, not compensating them for making public appearances or performing other tasks related to their jobs and creating a workplace where the women were threatened with being fired for voicing any complaints.

“I and my fellow cheerleaders were treated as the lowest of the low,” Hannah Turnbow said at a news conference. “The Houston Texans were paid thousands of dollars to have us show up at appearances at locations all over Texas with no security, no transportation and where our safety was not guaranteed.”

Turnbow said that after she was left with abrasions on her shoulder when she was attacked by a fan at one game, the team told her “to just suck it up.”

“We were harassed, bullied and body shamed for $7.25 an hour,” said ex-cheerleader Ainsley Parish.

Texans spokeswoman Amy Palcic said the team is constantly evaluating its cheerleader program and makes changes “as needed to make the program enjoyable for everyone.”

“We are proud of the cheerleader program and have had hundreds of women participate and enjoy their experience while making a positive impact in the local community,” Palcic said in a brief statement.

Prominent women’s rights attorney Gloria Allred, who’s representing the cheerleaders, alleged the women were paid “so little or not paid at all” for much of the work they did because of their gender.

“Surely (Texans owner Bob) McNair and the Houston Texans can find it in their budget of hundreds of millions of dollars to pay these women a fair wage, not minimum wage,” Allred said. “I say, stop penny pinching. Pay these women what they deserve and make sure you pay them for every minute that they work.”

The lawsuit is seeking unspecified damages.

ENGLEWOOD, Colo. (AP) — The daughter of Denver Broncos owner Pat Bowlen announced her desire to take over the leadership role of the team and was informed she hasn’t met the criteria.

The Pat Bowlen Trust issued a statement Thursday saying Beth Bowlen Wallace “is not capable or qualified at this time.”

The team was placed in a trust when Pat Bowlen stepped down in 2014 because of Alzheimer’s. The trust is overseen by three people, including team president and CEO Joe Ellis, who has final say on day-to-day operations until one of Bowlen’s seven children can succeed him as controlling owner.

Bowlen Wallace said in a statement that it is her desire to “lead this team with the same passion my father did and help the Broncos become Super Bowl champions again.”

The Broncos have made 18 of their 22 playoff appearances during the Pat Bowlen era. Since he was introduced as the majority owner on March 23, 1984, the team has the second-most regular-season wins (behind New England) and captured three Super Bowl titles.

“I have advised the Trustees that I am ready and have done everything they said I need to do to take this step,” the 47-year-old Bowlen Wallace said. “Working in management at the Broncos is something I have prepared for and dreamed of doing.”

The stipulations to be controlling owner of the Broncos included completion of a business or law degree and five years in management in the NFL or another major business organization.

Bowlen Wallace graduated from the University of Denver’s Sturm College of Law in 2016. She also worked with the Broncos as the director of special projects before her employment was ended in 2015.

She’s assisted with Colorado-based nonprofits and charitable organizations, including the Alzheimer’s Association. She’s also worked as an executive in the oil and gas industry since 2016.

“My father’s number one goal was to win,” Bowlen Wallace said. “He understood that took financial commitment, hard work, dedication, the right leadership, and drive. He was motivated to win not only for himself and the team but for the pride of Broncos Country, our beloved and loyal fans.”

“Pat Bowlen’s wish and his legacy was to have one of his children run this team,” Kerry and John Bowlen said in a joint statement. “That is what he always wanted. Beth is the best positioned of all the children to take over now. Her plan is just right — to take over as managing owner now and in the future allow the other children to mature, learn and grow into the position, keeping this team in her family and in Denver, where the Broncos belong.”

The Trust said Pat Bowlen made it clear that his children “were not automatically entitled to a role with the team and that they would have to earn that opportunity through their accomplishments, qualifications and character.”

In the statement, the Trust said it had communicated this with her.

“Although Beth has declined our invitations to discuss her qualifications for the last two years, we will continue to proactively engage and meet with any of the Bowlen children who express a desire to earn the right to succeed their father,” the statement said. “We will vigorously defend Pat’s plan in responding to these and any statements that are contrary to Pat’s words and intentions.”

Added Ellis: “As a trustee and someone Pat designated to oversee his team, I have an enormous responsibility to carefully administer his succession plan and make decisions in the best interests of the Broncos. We will continue to follow Pat’s blueprint — and nobody else’s — while keeping our focus as an organization on having a successful season.”

This is the second such lawsuit filed against the Texans.

Last month, three ex-cheerleaders also filed suit in Houston federal court, accusing the Texans of not paying them minimum wage, not paying overtime wages and accusing a cheerleading supervisor of body shaming them.

These lawsuits are part of a series of recent complaints that have been made by cheerleaders against NFL teams across the country.

The New York Times reported last month that on a trip to Costa Rica for a photo shoot in 2013, Washington Redskins cheerleaders had their passports collected, were forced to be topless for a calendar photo shoot that included male spectators and were asked to be escorts for sponsors at a nightclub.

Former cheerleaders with the Miami Dolphins and the New Orleans Saints also have filed recent discriminatory complaints and lawsuits against their ex-teams.

Last year, a federal judge in California dismissed a lawsuit that had been filed by a former San Francisco 49ers cheerleader who had accused the NFL and team owners of conspiring to suppress wages for cheerleaders.

Allred said she planned next week to present a letter to NFL Commissioner Roger Goodell asking him to review the complaints being made by her clients and other cheerleaders about their working conditions.