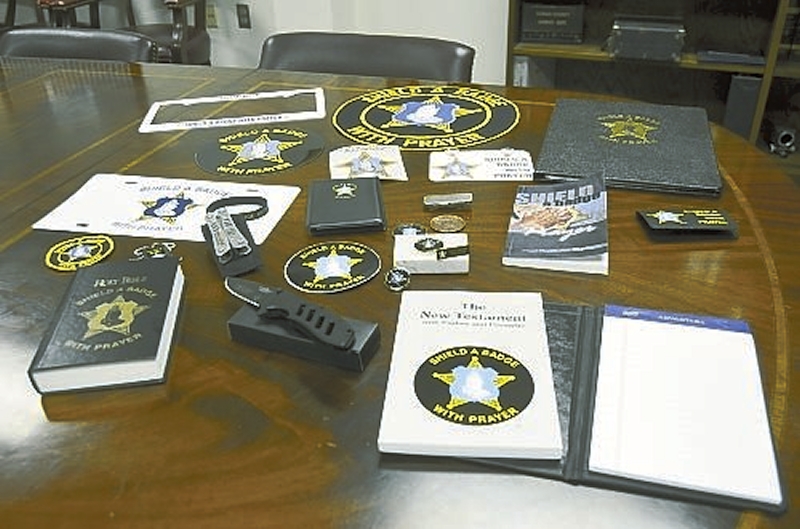 Churches and individuals can sign up for the Shield-a-Badge With Prayer program. They receive the name of an officer — be it a sheriff’s deputy, police officer or Highway Patrol— and pray for him or her for a year. Salisbury Post file photo

It was just another day in paradise for local law enforcement.

Police and deputies chased a man who robbed Salisbury’s First Natioanl Bank all the way to Thomasville, where the suspect stabbed a business owner and tried to force his way into the man’s store. Tasers failed to deter the robber, who refused to drop his knife. As a last resort, a Salisbury officer shot and fatally injured the suspect. The officer was protecting others from being hurt, but an investigation will follow.

In a separate incident, an employee at the Wendy’s restaurant on Jake Alexander Boulevard refused to serve a man because — get this — the customer was a uniformed deputy with the Rowan County Sheriff’s Office.

And that was just Wednesday.

Serving in law enforcement can be a thankless, dangerous job, as Wednesday’s events demonstrated. Officers go after dangers the rest of us would flee. They are in the business of serving and protecting the public, and they pursue that mission with determination and grit — to the point of confronting a knife-wielding assailant.

Across the country, about 65 law enforcement officers have died so far this year, including 29 who were shot to death and 23 traffic-related deaths, according to the National Law Enforcement Memorial Fund. Thousands more suffered assaults.

So far no one’s counting how often officers are refused service by fast-food workers, and they shouldn’t have to. We don’t know the back story of the person who turned way the Rowan deputy, but the employee’s actions were stupid and disrespectful. Fortunately, racial theories can be eliminated; both the officer and the employee were white. Whatever the motivation, we hope that person is now looking for a new job — and has learned a lesson.

Law enforcement officers are not perfect; we’ve all seen reports of rouge officers who made horrible mistakes. What we don’t see, though, are the countless procedures and arrests they conduct with professionalism and restraint. We don’t see the help they give people in need. We cannot comprehend the risks they take and the adrenalin that courses through their veins. And we seldom hear of the insults slung at them.

That comes with the territory. Enforcing the law by its very nature involves angering people and creating enemies. Criminals don’t like to be caught.

Among law-abiding citizens, though, there remains great respect and even awe for the people who enforce our laws. Actor Sylvestor Stallone once said, “If you think people are inherently good, you get rid of police for 24 hours — see what happens.” No thanks.