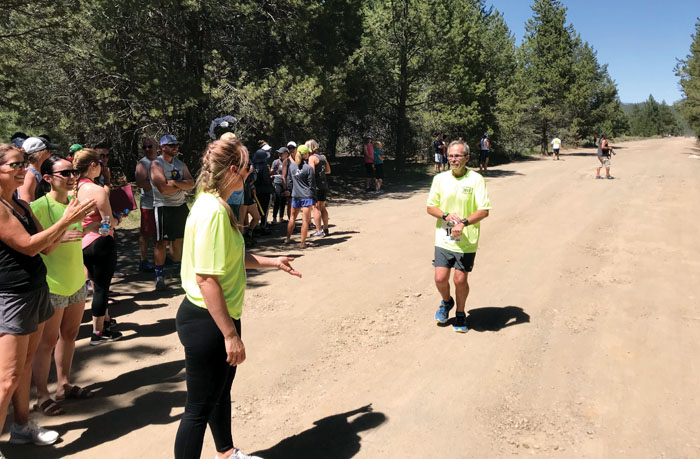 After days of anticipation, I got to run my first leg in the Reno/Tahoe Odyssey of 7.5 miles, ending at about 6,000 feet. As the 7th runner to hit the pavement out of 12 on our team, I looked forward finally to hitting the road. The scenery was beautiful as we crossed two dams and ran toward more snow-capped mountains. My next leg climbed over a thousand feet in about 4.2 miles in the middle of the night and finished at about 1 a.m., topping out at 7,200 feet. This was the highest point on the whole journey for our team.

Then very early Saturday morning, my last leg began in Virginia City, Nevada, of Bonanza fame and will be much less challenging but still near the highest point of our journey.

Since I had never participated in a relay of this sort, I was amazed at over 200 teams of all shapes and sizes with some of the most unusual names painted on vans and unusual outfits. Bathroom lines were long and parking was hard to find as we worked our way along the various runner exchange points. Other members of our van’s team were Darryl Fisher, Mike Deines, Lindsay Columbo, Susan Bauman and Laura Wissert. This was the 14th Annual Reno Tahoe Odyssey.

After the folks on our van finished their runs last night, we were off for several hours while the other van went to work. We tried to get a little bit of sleep and didn’t do well with that at all. I was the first runner on our van to go out in Tahoe, California, just after midnight and had to climb a 10 percent grade for four miles before the others followed to push through the night until about 4 a.m. this morning. Back off again for a few hours, we stopped for sleep at friend’s house for about three hours. I did not get a wink of sleep at either place and therefore had not slept at all since 2:30 a.m. Friday morning through this writing which occurred at 5 p.m. on Saturday afternoon.

My last planned run was 3.1 miles up at a steep grade out of Virginia City and I was glad to be done with challenging work. Or so I thought. One of our runners was injured late in the morning and I took 4.3 miles of her run back in Reno and was toast by the time it was all complete.

One of our team members was Jonah Vandever who is a double-legged amputee who was using a hand-driven bike. He did the first and last legs for the team. Jonah’s Gofundme page is www.gogetfunding.com/legless-guy-needs-computer-knees/ . Jonah’s story is told there.

The temperature did dip into the low 40s last night while we ran through the night near the highest elevations. We arrived back in Reno at the finish line just after 1 p.m. Saturday afternoon.

With the cold runs last night, we tried to stay warm and this afternoon, we tried to keep our later runners from being too hot. I am worn out, tired, sore, sleepy and excited for the first 48 hours of my trip out west this time.

Today, I get to fly to Edwards Air Force Base in California for a special presentation on the F-35 fighter jet. I will fly with Darryl Fisher in one of his planes. That should take most of the day.

Thanks for joining me on the beginning of the adventure. After the completion of the running event and the trip to Edwards AFB today, I have more interesting activities planned for Monday. I will get back to bike riding on Tuesday and go see the Pony Express country and a few small towns in Nevada and Utah while hopefully meeting some of the locals. See you then!