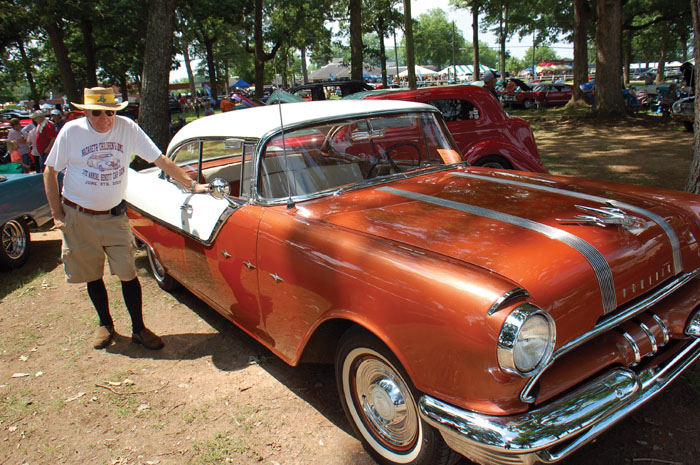 On one side of the road was one of the best vintage car and truck shows in the area. On the other side were the vendors, food, drink, big giveaways and giant entertainment that comes with your typical spring festival.

Together, they combined for the 112th annual Nazareth Fun Fest, the biggest fundraiser for Nazareth Child & Family Connection. Yes, you read that right — 112th — meaning this might lay claim to the longest running festival in Rowan County.

Nazareth Children’s Home was established in 1906, and its first anniversary celebration was held the following year. The celebration over time has evolved into what for several years has been called Fun Fest.

For the past 23 years, a benefit car show has been held with it. The vehicle show attracted 174 entrants by noon Saturday in the grove of trees next to the church.

Beyond the cooperative weather, a lot of other factors went into that.

One was a big-name local entertainer in Darrell Harwood, whose band performed between 1 and 4 p.m.

“We’re thankful to have him here,” Trexler said.

The Fun Fest also received an immediate jolt of good news when an anonymous donor contributed $10,000. This came in addition to a drawing’s grand prize of a Toyota Corolla, furnished by Cloninger Toyota of Salisbury.

Nazareth sold $5 tickets, making holders eligible for the Corolla and others prizes, including a $1,000 VISA gift card, a 65-quart Arctic cooler, a $200 gift card to Great Wolf Lodge and an Amazon Echo speaker.

Trexler said Fun Fest proceeds have a significant impact on the operating budget for Nazareth. While the campus receives state and federal monies, they do not cover everything needed to finance the care of children on campus and Nazareth’s outreach services in Cabarrus and Davidson counties, Trexler said.

By all accounts, it was one of the biggest Fun Fest turnouts ever and among the strongest number of entrants in the benefit car show, which featured all manner of classic antique cars and trucks, hot rods and muscle cars.

Entrants themselves determine who receives awards. They vote for their top 10 vehicles and also make specific choices for best of show, best interior, best paint and best engine. The top 40 vehicles received trophies

One car receiving a lot of looks Saturday was Jimmy Barrow’s 1969 AMC Hurst SC Rambler, which was AMC’s answer to the Mopar, Ford and Chevy muscle cars.

Barrow said he has refused straight out offers of $70,000 cash for the red-white-and-blue Rambler. Less than 400 of these are thought to be left in the country, and his is one of 34 that still have all the matching manufacturing numbers intact.

Back when Barrow bought the car — without his father’s knowledge — he was making 75 cents an hour at work. He saved whatever money he could and supplemented that by drag racing in Farmington on the side.

The car has a 390 cubic-inch, 500 horsepower motor. For drag racing, Barrow borrowed some slick tires.

Barrow won enough and saved enough to pay off the car in six months. But the car’s title came in the mail one day, and Barrow’s father saw it before Jimmy got home.

“We need to talk,” his dad said, waiting for him on the porch. He did not believe Jimmy would ever have enough money for that car, making only 75 cents an hour.

But Barrow took him inside, retrieved a box and showed him time sheets, receipts and trophies he had earned drag racing as evidence he had made the money honestly.

As with many vintage car owners, Roland Mays of Concord has a nostalgic connection to his beautifully restored, creme-and-bronze, 1955 Pontiac Starchief Catalina. From front to back, it’s a monster of a car.

“Look around here,” said Mays, plastic process and tool manager for Carpenter Industries in Harrisburg. “You won’t see one of these, not a ’55.”

Most cars from this era are typically restored Fords and Chevys.

Mays’ father bought a Pontiac Starchief new in 1955, and “when I got out of high school, this was my first car,” he said.

Living in Cockeysville, Md., at the time, Mays found this particular Starchief in 1989 and took about three years in its total restoration. It has a 200 horsepower motor, power steering and power brakes — and room, lots of room.

An appreciative Frank Eppolite of Salisbury considers it practically “brand new,” given its beautiful condition.

Mays, Eppolite and Jack Pata of Matthews were walking up and down the rows of vehicles Saturday, appreciating the overall quality of the show.

They belong to the 450-member Hornets Nest Region Club in Charlotte. Pata thought the club would have had a bigger participation at the Fun Fest Saturday if about 60 club members hadn’t been attending a benefit for Hendersonville Community College.

Eppolite drove to the Nazareth vehicle show in a 1939 Ford, which he purchased in Mocksville about six months ago. A guy named Freddy Brewer had restored it.

“It’s an issue with all car clubs,” Pata said.