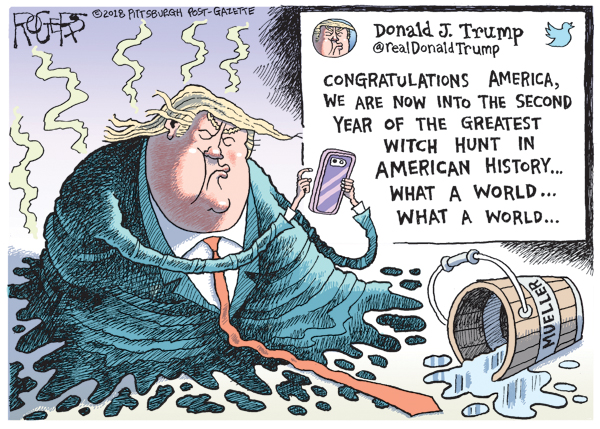 President Donald Trump’s escalating attacks on special counsel Robert Mueller are replete with distortions and lies reflecting real fear — he’s in the legal crosshairs. The president’s response, which may be working, is to muddy the waters.

Not too long ago Trump was vowing cooperation with an investigation he said would prove he did nothing wrong. But in the last several days, he has tweeted that the Mueller team is a “rigged Witch Hunt,” orchestrated by 13 “angry and heavily conflicted Democrats” scheming to meddle in the November 2016 elections. And his latest lawyer, Rudy Giuliani, now says the investigation is “illegitimate.”

Trump is also a master in the art of diversion. He claims the real crime is that the Democrats planted an informer in his campaign to make a phony case of collusion with the Russians; he calls it “Spygate.” His supporters insist the critiques of Mueller are no different from the Democrats’ attacks on special counsel Kenneth Starr when Starr was investigating President Bill Clinton in the 1990s.

These accusations are baseless on all counts. Mueller has already issued indictments against 19 people, who include four former Trump associates and a bunch of Russians. There were dozens of meetings between Trump operatives and the Russians before the election, and the advisers almost always lied about them, the investigators have shown. There was enough probable cause against Michael Cohen, a lawyer-fixer for the Trump Organization, that a judge authorized an unusual raid on his files.

For those who have dealt with some of the characters involved in this inquiry, from Michael Flynn to Roger Stone (whom I’ve known and covered for 40 years), none of this comes as a surprise.

With this damaging context, there is a simple response that comes naturally to Trump: smear. It has worked before, and he’s good at it.

Take the charge the Mueller team is a Democratic cabal. There are at least a dozen assistants who are registered Democrats; most live in Washington or Maryland where often the only vote that matters is in the Democratic primary. There are a few who donated to Hillary Clinton’s 2016 campaign. They were in Mueller’s former law firm, WilmerHale. A partner at the firm, Jamie Gorelick, aspired to be Clinton’s attorney general. She’s now an attorney for Trump’s son-in-law, Jared Kushner.

This supposed Democratic conspiracy is led by Mueller, a lifelong Republican, who was appointed to federal posts by three Republican presidents: Ronald Reagan and both Bushes. Also involved in the investigation are scores of FBI agents. They are rarely left-wingers.

Trump’s bogus distractions are also a smear tactic. There was an FBI informant who met with Trump aides who had suspicious Russian connections, a perfectly normal practice in intelligence-gathering; there was no Democratic plant. We know Trump traffics in these conspiracy theories; he was, after all, the leader in promulgating the lie that Barack Obama wasn’t born in America.

The Ken Starr comparison is also specious. Starr was a decent man with no prosecutorial experience. His appointment was engineered by a right-wing federal judge, overruling the Justice Department. Starr, an active Republican, made no secret of his ambition to be tapped for the Supreme Court.

Mueller was appointed by Rod Rosenstein, Trump’s Republican appointee as deputy attorney general. No one ascribes any political ambitions to the 73-year-old Mueller.

Yet as patently false as Trump’s accusations are, it’s a mistake to discount their impact. U.S. history has had its successful demagogues — successful at least in the short term; remember Joe McCarthy.

Today, precious few Republicans seem willing to stand up for the rule of law. House Intelligence Committee chair Devin Nunes officially represents California’s 22nd congressional district; in Washington he’s a wholly owned Trump subsidiary. Even those who know better, like Sen. Lindsey Graham of South Carolina, have been too accommodating.

As for Democrats, they are no match for Trump on this score, writes Peter Hamby in Vanity Fair recently. “Trump may not understand much, but he very much understands that simplicity and conflict win the attention war, not nuance. His shamelessness, too, is an advantage.”

The least talented president in modern history has command of the biggest and most effective megaphone:

“He dominates our attention universe to the point where he blocks out the sun,” Hamby writes. “It is as depressing as it is remarkable.”

Albert Hunt is a Bloomberg Opinion columnist covering politics and policy. He was the executive editor of Bloomberg News, before which he was a reporter, bureau chief and executive Washington editor at the Wall Street Journal.