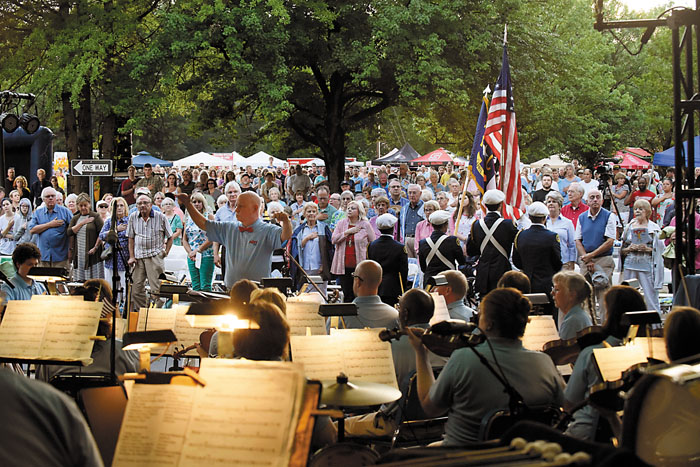 SALISBURY — When the 14th annual Pops at the Post concert started about 8:15 Saturday evening, it was a comfortable night, some patches of blue were in the sky and the Salisbury Symphony was sounding big and bold.

“Those who didn’t come back are missing it,” Maestro David Hagy said.

Hagy was referring to a severe thunderstorm that roared through Salisbury about 6:30 p.m. and lasted a half-hour, sometimes with strong gusts of wind. All of a sudden, tailgaters were holding for dear life onto their portable tents.

Vendors frantically gathered up their wares. Food trucks were shutting up windows and doors. The many concert-goers who had been enjoying the songs and dancing to the Salisbury Swing Band were running for cover — often back to their cars.

Others braved it out on lawn chairs while the rain pounded their umbrellas.

But the show went on. The storm cleared by 7:03 p.m., leaving a rainbow over the downtown.

People emerged from under their tailgating tents. Folks returned from their cars. The umbrellas went down, and the musicians — all wearing their light blue golf shirts — started putting themselves in concert mode.

Leading to several downed trees in Salisbury, the storm also ended up causing a half-hour delay in the concert’s start.

Sound engineering crews wanted to make sure all the wiring was dry and there wouldn’t be any electrical shorts.

As the concert was ready to begin and she looked out onto the large crowd that had reassembled, Salisbury Mayor Al Heggins said it all was “proof that nothing stands between us and our Pops.”

It turned out to be a memorable birthday celebration for Courtney Williams, who turned 13 Friday. The Williamses and their friends had set up a tailgating birthday bash complete with Southern-styled food from Smoke Pit and the Country Club of Salisbury.

The fancy birthday cupcakes came from Abigail’s. The tables were beautifully decorated with flowers and gingham.

“And the rain ruined it,” lamented Courtney’s mom, Traci Williams. “But we love it (Pops at the Post). We always try to come.”

What will Courtney remember about this birthday? “Probably hiding out in the car with all my friends, waiting for the rain to stop, then coming out and eating food,” she said.

Highlights of the concert included the “Bell Tower March,” an original composition by John Stafford, director of music for First Presbyterian Church.

This was the last Pops at the Post before the block bounded by West Innes, South Church, West Fisher and South Jackson streets goes under heavy construction, starting its transformation to a new downtown park.

The park’s name will be Bell Tower Green, the name coming from the iconic steeple that will be a focal point.

As always the Salisbury Symphony ended its Pops at the Post concert with the “1812 Overture,” “The Salisbury Post March” and the “Stars and Stripes Forever” march.

Before the intermission, the concert included songs from “Hamilton” and a George M. Cohan medley.

The night was dedicated to the late Bill Stanback, a loyal supporter of the symphony.

“Certainly, if there was anything Bill loved, it was nature and family,” Hagy said.

Punctuated by a beautiful cello opening, the first composition — “Symphony No. 8: I. Allegro Con Brio” — was dedicated in particular to Stanback.

Before the rains came, this downtown area was alive with the tailgating parties, the Salisbury Swing Band, food trucks and a row of vendors set up by Rowan Arts & Ag.

Rowan Public Library also used the event as an opportunity to kick off its Summer Reading program, which this year is offering READ Squared, an online tool that tracks summer reading hours.

“There’s always a little bit of whimsy in everything,” Stewart said.

Amy Laws’ tent offered her Once in a Blue Moon jewelry, which she said offers something for “every type of gal.” Laws was impressed with the Pops at the Post event.

“You have a great crowd of people and hopefully it can grow into a bigger event,” she said. “It’s nice to be part of it.”

Among the tailgaters were women associated with the Class of 1955 at Lenoir-Rhyne University. The women alternate as hosts for their gatherings, and they attended Pops at the Post at the urging of Emily Stirewalt.

“I’ve been wanting to get them here for this for many years,” Stirewalt said.

These get-togethers started 18 years ago with a pajama party, and it has taken the friends to lovely places in North Carolina, South Carolina and Georgia.

Besides Stirewalt, the other Lenoir-Rhyne faithful attending were Louise Waldrep of Greenville, S.C., Sarah Ingle of Charlotte, Sonja Olsen of Brunswick, Ga., Jane Brethauer of Sylva and Judy Woolly of Columbia, S.C. (Judy’s husband was a ’55 grad.)

Two of the women missing were Frances Ritchie of Summerville, S.C., and Lib Carswell of Columbia. The L-R women feasted at their tent with chicken, chicken salad, deviled eggs, cantaloupe, cheese, olives, pickles and more.

Next door, the N.C. Transportation Museum was tailgating at the Pops for the second year in a row.

Executive Director Kelly Alexander said it was a chance for staff, volunteers and board members to get together “and celebrate a great Salisbury tradition.”

Betsy Mowery did much of the planning for the tailgate. Everybody who attended brought a dish, and it turned out to be “a perfect potluck,” Mowery said.

“We just wanted to have an evening of fun and fellowship,” she added.

This was the first year Catawba College alumni had a tailgating tent at the Pops. Catawba cheerleaders were offering face tattoos for folks dropping by. The tent was giving out school magnets, banners and snacks.

“I just think there are so many opportunities in Salisbury for our alumni to get together,” said Erin Stringer, a 2005 graduate and director of alumni and parent relations at Catawba. “… I hope we keep doing things like this.”

Christine Maloney and Joyce Durkee waited out the storm before Saturday’s concert in their car, and they reported being plenty comfortable with the radio playing and the air-conditioner running.

Maloney remembered the 2017 concert had a storm at the end, while this one had its big blow at the beginning.

Maybe that’s what Pops at the Post promises: Every concert has a little bit of whimsy.