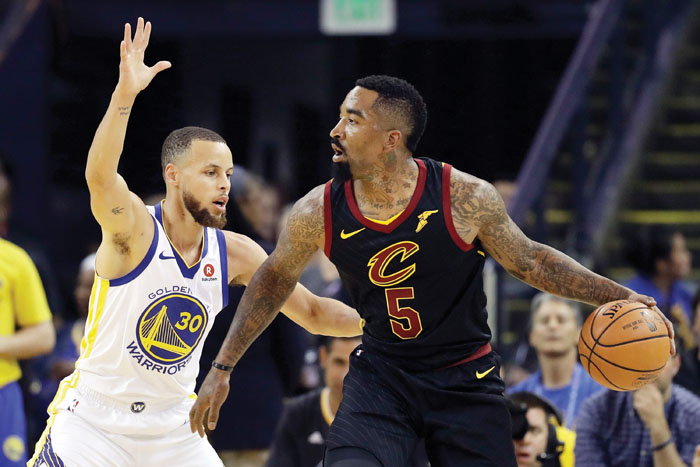 By TIM REYNOLDS, AP Basketball Writer
OAKLAND, Calif. (AP) — Two days later, there is still no clarity on what J.R. Smith knew when he grabbed that offensive rebound in the final seconds of regulation of Game 1 of the NBA Finals.
Not even in Smith’s own mind.
“I can’t say I was sure of anything at that point,” Smith said.
All he and the Cleveland Cavaliers are sure of now is this: They’re down 1-0 to the Golden State Warriors in the NBA Finals, with Game 2 on Sunday night and Smith knowing that he’s going to be booed, made fun of, mocked and probably worse by the crowd at Oracle Arena.
Smith became one of the big Game 1 stories for all the wrong reasons . He grabbed an offensive rebound off a missed free throw in the final seconds of regulation with the game tied, then ran toward midcourt as if he was running out the clock and thinking Cleveland had a one-point lead. The Cavaliers wound up losing in overtime.
“He probably took that loss as hard as anybody on the team,” Cavs star LeBron James said Saturday. “But one thing about J.R., he has an uncanny ability to bounce back. I think people have seen that throughout our postseason runs, where he hasn’t played well or played to his ability that he thinks he should have played, and then the next game he comes on and shoots the ball extremely well.”
That bounce-back tendency for Smith will be tested now like perhaps never before. This wasn’t just a gaffe. This was a huge gaffe, in the final seconds of the fourth quarter of Game 1 of the NBA Finals with the game on the line. And in the immediate aftermath, it appeared Smith said to James on the court that he thought the Cavs were leading — something he denied afterward.
“I might have said that,” Smith said. “Not sure, but I might have.”
To say Smith was the reason Cleveland lost Thursday night isn’t right, or fair. There’s no guarantee that Cleveland would have scored to win the game in those final seconds if Smith had done anything differently.
Still, he was blamed.
“I’m glad it happened to me as opposed to anybody else on my team,” Smith said. “To be in that situation is tough and it’s not a situation everybody can handle, so I’m glad it happened to me.”
Smith spent Friday in his hotel room for the most part, watching the Memorial (“Tiger played really well,” Smith said), talking with Kyle Korver and visiting with his kids over FaceTime.
He knows he’s a punch line. He’s been there before.
“That’s pretty much who I’ve been my whole life,” said Smith, who bonded with a therapy dog earlier this season during a rough stretch. “I’ve always been the one guy who’s the butt of the jokes, or that one guy who does something crazy and everybody’s got to look at or whatever the case may be. And then I come back and be myself and play the next day. I don’t really dwell on things too much. It’s been like that my whole life. That’s what it looks like it’s going to continue to be.”
The Cavs have made clear that they’re not quitting on Smith.
They need him.
“He’s going to start. And no, I haven’t lost confidence,” coach Tyronn Lue said. “J.R. can shake off anything, and when everybody tends to count J.R. out, that’s when he comes through. So he’s definitely going to start again. He’s a big part of what we do. That last play is over, it’s behind us and now we’ve got to move on.”
A bounce-back game would be more than welcomed by Cleveland. When Smith is good, the Cavs are really good.
Cleveland is 10-1 this season, including playoffs, when Smith scores more than 15 points. The Cavaliers are 19-5 when he makes more than half his shot attempts. They’re 20-9 when he makes at least three 3-pointers. Those are some of the many reasons why Lue still has confidence in him, and Smith clearly appreciates that.
“I’ve been playing like dogcrap all year and he’s stuck with me,” Smith said. “So he’s one of the people who gives me the most confidence.”
And he’s due, too.
Smith has missed more than half his shots in eight straight games — his longest such cold streak since November. The Warriors expect that Smith and the rest of the Cavaliers will be more than ready for Game 2. And Smith said his teammates still believing in him is helping.
“Everybody says it’s not just the one play or the reason why we lost,” Smith said. “Take it however you want it. My teammates have been great. Very supportive.”
___
More AP NBA: http://apnews.com/tag/NBAbasketball