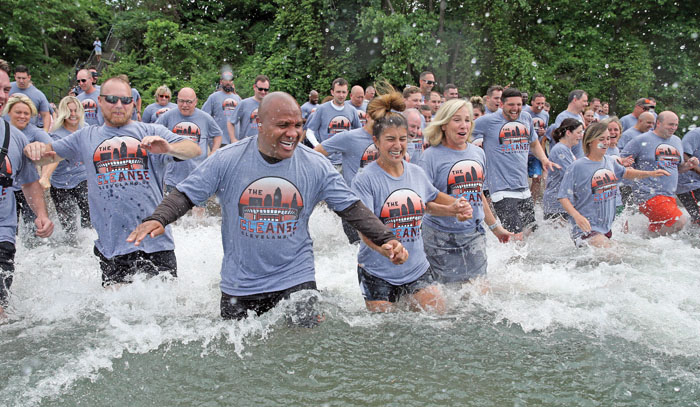 Cleveland Browns head coach Hue Jackson, owner Dee Haslam and other Browns employees run into Lake Erie to take the 0-16 plunge he promised, Friday, June 1, 2018 in Bay Village, Ohio. Hue Jackson survived a zero-win season and a chilly dip in the lake. Cleveland's coach made good on his promise and jumped into Lake Erie on Friday, a plunge he hopes will wash away years of losing and frustration for the Browns and fans who haven't had much to cheer about in years. (Joshua Gunter/The Plain Dealer via AP)

By TOM WITHERS, AP Sports Writer
BAY VILLAGE, Ohio (AP) — Hue Jackson surfaced from the chilly water soaked and smiling before he raised both arms in triumph.
Cleveland’s coach hasn’t had many moments to celebrate during two miserable seasons with the Browns, so this felt like a victory over the dreaded Steelers.
A very wet, wonderful win.
Jackson took a dive into Lake Erie on Friday , delivering on a promise with a dip he hopes can help cleanse the bumbling Browns, who have gone 1-31 in two seasons with Jackson in charge.
Clad in a T-shirt and shorts, Jackson jogged into the surf holding his wife Michelle’s hand before submerging himself. He popped up, pulled up his sagging swim trunks — but not before his backside was exposed — and then splashed along with owner Dee Haslam and more than 150 team employees who turned out to support him and raise money for his charity.
“No more freakin’ losing,” Jackson hollered. “Let’s go!”
Jackson’s plunge had been in the works for months. After the Browns went 1-15 in his first season, Jackson vowed that if the team finished that poorly again, he would jump into one of the Great Lakes. And when Cleveland staggered to a 0-16 record last season, becoming only the second team in NFL history to lose all 16 games, Jackson had no choice but to stick to his words.
“This is not something I do every day, but I made a statement, and I have to back it up,” Jackson said. “I came here two years ago to win, and I’m going to win here. I truly believe that. But I think when you make statements, you’ve got to stand by them.”
With a TV news helicopter hovering over Huntington Beach, and an NFL Films crew recording his every move on land and sea, Jackson spent several minutes in the unusually warm 72-degree water.
After returning to shore, Jackson expressed relief to have it behind him.
This was a chance to wash off the filth from two painful, forgettable seasons.
“It feels good that it’s over with,” Jackson said. “It’s over and done with. The page is turned, and you can see it’s not just me, it’s our organization. They are the reason why I do what I do, and our players and our fans. I know our fans have been very disappointed. I get it. But that page is closed. Hopefully they’ll give us a chance to earn back their respect, their trust, their affection for our football team and this city, because we plan on doing something special.”
Before he headed into the water, Jackson became emotional while speaking to the team’s employees. He pledged to donate $100 for every Browns co-worker who joined him, and Dee and Jimmy Haslam matched him, raising $30,000 for his foundation which raises awareness and fights human trafficking.
Jackson was fortunate to keep his job following two seasons, but Dee Haslam said the team remains confident he’ll get the Browns turned around.
“Hue’s a great coach, a great leader of men,” she said. “The last couple years have been terrible for us and been really terrible for our fans. We take that responsibility and feel horrible about it because Northeast Ohio and the fans of the Cleveland Browns deserve so much more.”
As he prepares for his third season, Jackson said his days of making predictions are over.
“I’m not making any more guarantees,” he said. “I’m not making any more promises.”
___
More AP NFL: www.pro32.ap.org and www.twitter.com/AP_NFL