‘Closed to none’: John Wilkerson’s crusade against social injustice, racism, poverty presses on 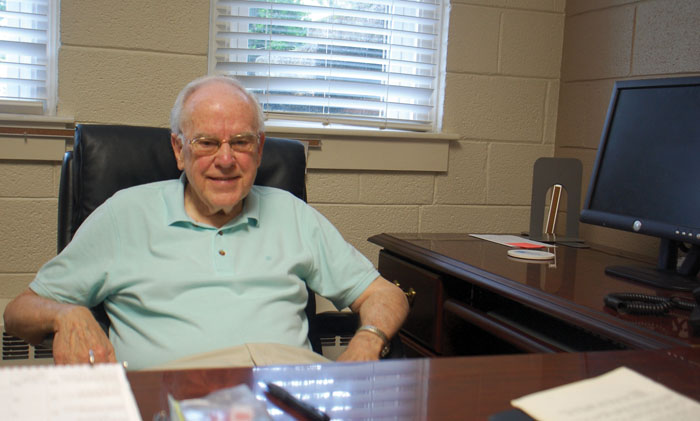 Dr. John Wilkerson sits at his desk in the basement office at John Calvin Presbyterian Church. Wilkerson, 80, will give his last sermon at John Calvin Sunday. Mark Wineka/Salisbury Post

SALISBURY — This week, as he packed items in his office into boxes and ferried the bulk of his books to Hood Theological Seminary, Dr. John Wilkerson couldn’t hide a look of satisfaction.

On Sunday morning, the 80-year-old Wilkerson will deliver his last sermon at John Calvin Presbyterian Church, a congregation that holds a special place in his heart, a membership he believes is prepared for the days ahead.

Those days, he predicts, will be filled with outreach, risk-taking, inclusiveness and the kind of Christianity practiced by the Good Shepherd.

“This is a church open to all and closed to none, period,” Wilkerson says.

You have to know Wilkerson’s history in Salisbury to realize why his 18-month stint as interim pastor for John Calvin has meant so much.

“This congregation, more than any other, has touched me deeply,” Wilkerson says. “… This church here — I have so many fond memories.”

He established himself as a soldier against racism and social injustice. Wilkerson and his congregation also devoted generous time and resources to helping people in need.

Wilkerson headed the effort in 1984 to establish the Crisis Assistance Network, which operated out of the basement at John Calvin Presbyterian. For three days a week, Wilkerson answered calls and met 15 to 20 clients a day.

CAN was a network of churches providing aid to transients, stranded motorists, families made homeless by fire, individuals overwhelmed by the cost of illnesses and others facing emergencies such as not being able to pay their gas bills in the winter or needing provisions to tide them over until food stamps arrived.

Wilkerson’s work with CAN evolved into his board chairmanship of Rowan Helping Ministries, which in its infancy aimed to combine programs such as CAN, homeless shelter, soup kitchen and the former Rowan Cooperative Christian Ministry, which included Dial Help, a clothing center at the old Price High School, the homeless shelter and the Yokefellow Ministry.

“He talked Ralph Ketner into building a facility and pulled all the different parts under one roof,” Peg Wilson recalls.

Elsewhere, when former Salisbury Mayor Wiley Lash looked to revive the Good Neighbor Council, Wilkerson signed up. Then it wasn’t long before Wilkerson and Elizabeth Duncan Koontz founded the Salisbury-Rowan Human Relations Council, which concentrated on improving communications among races.

Wilkerson was always about communicating, and that’s what a 1987 Salisbury Post profile labeled him — “the communicator.”

“There’s no such thing as no communication,” Wilkerson said then. “We’re all communicating something. What I’m seeing in society today is a lot of poor communication. It comes out daily in this office, but I see it in society, too.”

Amid all the packed boxes in his office, Wilkerson pauses to reflect on similar issues today.

“Basically, by and large, I hear the same conversations going on,” he says.

During the summer of 1987, Wilkerson addressed a 10-member panel of the Governor’s Task Force on Racial, Religious and Ethnic Violence and Intimidation, which held a public hearing at Livingstone College.

During his comments, Wilkerson warned that the Ku Klux Klan remained highly active and visible through marches, rallies and even a “national rally” for the Christian Knights of the Ku Klux Klan in western Rowan County.

Wilkerson, who grew up in a segregated Lynchburg, Virginia, received the N.C. Human Relations Council’s Citizen Award in 1987 because of his work with the local human relations council, CAN, Rowan Memorial Hospital’s chaplaincy program and the Milford Hills Lions Club.

It was a surprise when Wilkerson left John Calvin Presbyterian and Salisbury in 1990, but he saw a personal need for change. His first wife, Kaye, had lost a three-and-a-half-year battle with cancer and died on New Year’s Day in 1987.

He remarried, moved to Concord and set up a consulting and counseling business. He planned to focus on helping churches in conflict and also counsel people dealing with marriage and family issues.

But that plan took a turn quickly. First, he was asked to be part-time chaplain at Queen’s College in Charlotte (now Queen’s University). He also was approved as a part-time pastor for Thyatira Presbyterian Church in western Rowan County.

The Thyatira appointment soon became full-time. The church was going through a tumultuous, divisive time and several prominent families left. The congregation even held a vote in June 1991 to leave the denomination, though the measure did not pass.

Wilkerson stayed at Thyatira until the summer of 1992 and spent much of his time trying to heal the church. Meanwhile, he had found his new calling.

Since leaving John Calvin Presbyterian in 1990, Wilkerson has served  in 18 interim posts, from as far west as Nashville, Tennessee, as far north as Charlottesville, Virginia, and as far south as Greenville, South Carolina. He pastored congregations ranging from 225 to 1,600 members.

“Unfortunately,” Wilkerson says, “there were a lot of churches in conflict at these times, and it’s happening across the board (in all denominations).”

The divisive issue usually was the debate over membership for gay people. Much of Wilkerson’s  undergraduate and postgraduate training was in conflict resolution, coaching and counseling — things that have served him well as interim pastor at many churches.

Wilkerson also served a time as interim general presbyter and stated clerk for the Salem Presbytery, which covers 19 counties and 150-plus churches.

When he returned to John Calvin Presbyterian 18 months ago, his interview with the session included nine people, seven of whom he had known from 26 years earlier. He thought by taking the interim post, he was being given a chance “to finish what I felt I had left unfinished.”

“I think it was providential in more ways than one,” Wilkerson says. “I have a very warm place in my heart for this congregation.”

Wilkerson has had several takeaway lessons from his experience with so many churches. First, he says, there is a marked difference between being a church member and being a Christian disciple.

Too many churches and their members do not emerge from behind closed doors, Wilkerson says. They are boxed in by their buildings and programs, when instead they should be taking on the issues of social injustice, racism and poverty.

“For too long,” he adds, “we have lived a protected life. Get out there in the middle of Jerusalem and risk being unprotected. We need to realize when we take risks we are protected by the Good Shepherd.”

What churches should be about, he adds, is not growing their memberships but growing disciples. They should be ambassadors for Christ in their communities.

Wilkerson thinks what many churches lack today is not good intentions but the actual “intentionality,” especially when it comes to working past racial boundaries.

What if members of an all-white church and an all-black church sat down together and asked themselves what could they do to make a statement in the community? What if they came up with an intentional strategy to become one church, sell their existing properties and set up a new worship in a neutral site?

Maybe it wouldn’t even be a traditional church building, Wilkerson says, liking to ponder all the possibilities.

“The table of Jesus Christ welcomes all, no matter their background,” Wilkerson says. “… I’ve been so blessed. I’ve met so many people who get it.”

Wilkerson lives in Matthews with his second wife, Marge. During his 18-month interim posting at John Calvin, he typically stayed in Salisbury in basement accommodations afforded to him by the Cope family, going from Sunday morning to Thursday afternoon.

But there was a harrowing moment when his Salisbury assignment went off the rails. Wilkerson woke up the morning of Good Friday, eventually made his way upstairs at the Cope residence and realized his chest pains were serious. He was having a major heart attack.

“It was not a good Friday for me,” Wilkerson says.

His recovery meant he would not return until the week before Memorial Day, and by then his retirement was pending. He planned only two more sermons. His final topic Sunday will be “Pressing On.”

The message has to do with asking his congregants to look ahead, take risks and reach beyond the doors of the church.

As for Wilkerson himself, his days of being an interim pastor are done, but probably not his passion for consulting, counseling and communicating.