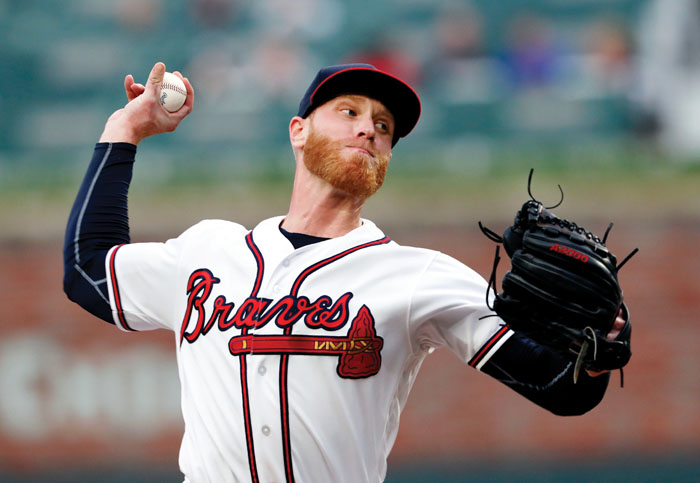 ATLANTA (AP) — Mike Foltynewicz had everything working so well that he was ready to keep pitching after the game ended.

Foltynewicz pitched a two-hitter for his first career complete game, Dansby Swanson broke the game open with a three-run homer in the seventh and the Atlanta Braves beat the Washington Nationals 4-0 on Friday night.

“I’m just very energized still,” Foltynewicz said with a big smile. “I feel I can go back and at least get one more. Great crowd. Great energy.”

Foltynewicz (5-3) retired 20 straight batters before issuing a leadoff walk in the eighth to outpitch Stephen Strasburg, who left the game cramping in his left wrist after 6 2/3 innings. Strasburg said he was not seriously injured.

The first-place Braves, winners of five of their last seven, moved 1½ games ahead of the Nationals in the NL East. Atlanta has scored an NL-best 106 runs in the seventh inning or later this season.

A night after Sean Newcomb pitched seven strong innings to snap Washington’s six-game winning streak, Foltynewicz was even better as he improved to 3-1 with a 0.56 ERA in his last five starts. He struck out 11 and walked one, throwing 73 of his 106 pitches for strikes .

“They were really aggressive tonight,” Foltynewicz said. “After the first pitch or two, they either popped up or grounded out, which helped me go deep in the game.”

Foltynewicz allowed a second-inning single to Bryce Harper, then set down 20 straight Nationals before Juan Soto walked in the eighth. He closed it out in the ninth by striking out pinch-hitter Michael Taylor, getting Wilmer Difo to ground out, allowing a single to Trea Turner and striking out Harper to end it.

The Braves got all the runs they needed with four in the seventh off Strasburg (6-5).

Nick Markakis singled, advanced to third on Kurt Suzuki’s single and scored when first baseman Matt Adams booted Johan Camargo’s grounder. Adams was trying to field the ball and throw out Markakis at the plate when the ball bounced off his glove and Adams inadvertently kicked it.

With runners on first and second and no out, Strasburg struck out Preston Tucker before Swanson hit his fourth homer into the left-field seats. He struck out Foltynewicz, then stepped back, placed his glove on the mound and called for a trainer. Strasburg left the game with cramps in his left wrist.

“It’s happened before,” Strasburg said. “It’s obviously humid out there. I think it’s probably something related to dehydration. It was just spasming up on me.”

Strasburg allowed seven hits and four runs — three earned. He struck out 10, the third time this year he’s racked up double-digit strikeouts and the 39th time in his career.

He made one mistake, hanging a curveball to Swanson .

“The inning’s not possible without Kakes leading off and then Kurt,” Swanson said. “Hitting is contagious. It just came down the line, and I was just the person who happened to get the hit.”

HOUSTON (AP) — George Springer dashed home from second base on a wild pitch by Chris Sale, then homered off the Boston ace to send the Houston Astros over the Red Sox 7-3 Friday night in a matchup of AL division leaders.

Mitch Moreland and J.D. Martinez hit back-to-back homers off Gerrit Cole (6-1) to start the fourth inning and get within 4-3. Martinez hit his major league-leading 19th homer.

Rookie Gleyber Torres had two hits and an RBI for the Yankees, who have won three straight to move a season-high 19 games over .500 (36-17). Gray (4-4) allowed one run and four hits with six strikeouts. Aroldis Chapman struck out the side in the ninth for his 13th save.

NEW YORK (AP) — Kyle Schwarber entered as a defensive replacement in the sixth inning and wound up homering and driving in four runs as the Chicago Cubs rallied against the beleaguered Mets bullpen.

The Cubs trailed 2-0 in the seventh before posting their fifth win in six games. Randy Rosario (2-0) pitched 1 2/3 scoreless innings. Brandon Morrow worked the ninth for his 14th save in 15 opportunities.

ST. LOUIS (AP) — Jameson Taillon pitched three-hit ball over eight innings to help the Pirates get their second win in their past seven games.

Cardinals starter Miles Mikolas (6-1) gave up two runs — one earned — in six innings. He allowed six hits, struck out two and walked one. This was his first loss since returning to the U.S. following a stint in the Japanese professional league.

Chicago mounted its entire rally in the sixth with two outs. Five White Sox relievers combined for 5 2/3 of hitless ball, with the second, Luis Avilan (2-0) recording one out in the sixth to earn the win.