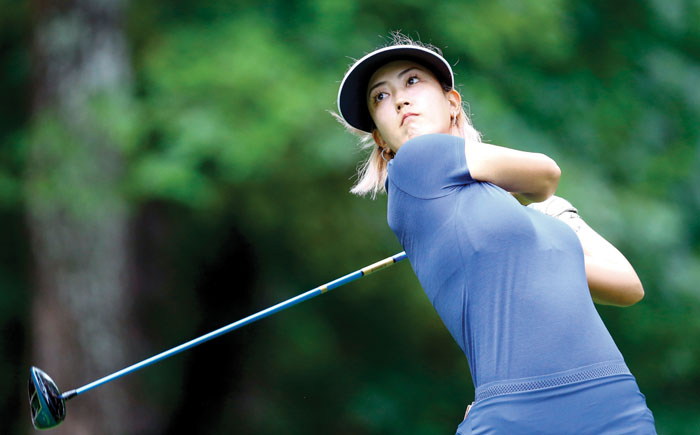 Michelle Wie tees off on the 11th hole during the first round of the U.S. Women's Open golf tournament, Thursday, May 31, 2018, in Shoal Creek, Ala. (AP Photo/Butch Dill)

BIRMINGHAM, Ala. (AP) — Michelle Wie was pleasantly surprised by the condition of Shoal Creek and her game after the first round of the U.S. Women’s Open.

The 2014 champion shot a 3-under 69 Thursday on a course that’s been drenched in recent days and weeks, forcing the cancellation of Tuesday’s practice round and limiting course time on the eve of the tournament.

Wie got off to a strong start with birdies on the second and third holes and had only one bogey.

“It’s mind-blowing how great the golf course is,” Wie said. “The greens staff, they’ve been working day and night trying to get this golf course ready and have done an amazing job.

“I thought there was no chance we could play a practice round (Wednesday). I was out there and the greens were actually great, today even better. Hopefully, you know, there will be no storms and just get better and better from here.”

She had withdrawn from last year’s U.S. Women’s Open with a neck injury and failed to make the cut in 2016, mired in 89th after the first round.

Wie’s in much better position this time.

With Shoal Creek mostly closed Tuesday, Wie said she “did a whole lot of nothing,” along with working out and doing rehab.

Wie said she was having fun with her playing partners, No. 3-ranked Lexi Thompson (71) and Jessica Korda (77).

“We had a blast out there,” Wie said.

She noted a few errant “mud balls” but was able to shrug them off after a solid round.

The 28-year-old Wie said she’s “really enjoying the game right now, just having fun out there and taking it as an adventure.”

She’s near the top of the leaderboard on the biggest stage after one round. It’s a far cry from some more recent experiences at the Open.

“You look forward to it the entire year,” Wie said. “It’s our national championship. There’s a lot of pressure. Worrying doesn’t really get you anywhere. I’m kind of going out there and just trying to have fun.”