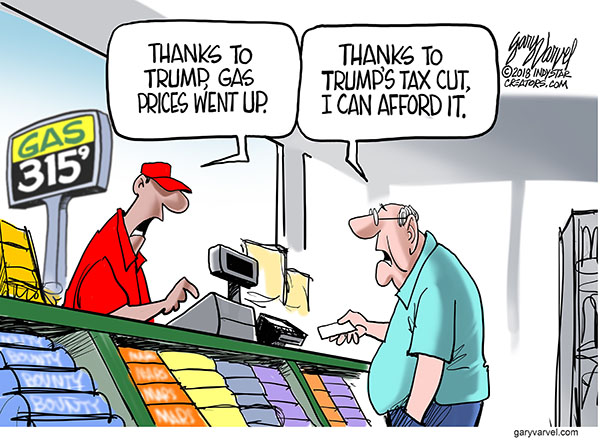 … Letter: Steve and Cokie Roberts have Trump all wrong

It is incredibly rare that a rich man says, “I have enough, I need no more.” No despot was ever secure in his power. Avarice is a bottomless pit. Ego and Wealth are cruel gods that cannot be sated.

So, yes, the powerful will almost certainly seek more power. The famous seek attention. The rich may lie, cheat and steal in their quest for more wealth.

But the self-effacing may not be consumed by fame. The generous can avoid being enslaved by wealth. Those who see themselves as servants may not be dominated by power.

So virtue is not to be found in investment portfolios, position or poll numbers. Look instead for decency, gentleness, generosity, honor, valor, and humility.

Steve and Cokie Roberts have been around for a long time and are part of the liberal establishment. You won’t dare catch them giving Trump credit for anything. I don’t mind the Post giving readers both sides, but I think they could do better than Steve and Cokie and Leonard Pitts. They’re absolute Trump haters. But I agree, Mr. Roberts, the country is already in better shape under Trump’s leadership.

The Post does its share of “devoting its editorial page” to conservative thinkers, like Cal Thomas, for example. What’s wrong with giving the public multiple perspectives ? Nothing. Only despots fear a well-read and informed public.

And instead of droning on with drivel of President Obama’s “bowing before Muslims” (that’s such a hackneyed and tired one-liner), read opinion articles with an untilted mind to see what is actually said.

And finally, why do these Trumpsters always think that anyone who didn’t support 45 must be a Hillary/Obama acolyte? On the contrary: my vote for president in the ‘16 primary (for John Kasich) is one I was proud to cast. With satisfaction in my heart and conviction of my mind, however, I changed my affiliation away from the new-unrecognizable Republican Party last December. Quoting Robert Frost, “and that has made all the difference.”

These two obviously contributed heavily to the Clinton campaign and have been eternally demoralized and defeated. Criticizing our president is all they have left. Accent on “left.”

I agree with you, Richard Roberts. I for one am tired of reading the Robertses’ vitriolic opinions of America and the president. There are hundreds here in Rowan County who feel the same way about their columns but just will not complain to the Post.

It’s not just the economy, Republicans.

We’re not single-issue voters. Increasing business is all well and good, but how about protecting women, immigrants, homosexuals, African-Americans, the poor, the veterans, the sick, the teachers? Is it too much to ask that you not act like raiding hordes scooping up whatever treasure you can carry and burning the villages and salting the fields behind you as you run away?

Yes, the economy is doing well. It was doing well in 2006, too. But the GOP is once again cutting consumer protections and enacting legislation that overwhelmingly favors big corporations, and we’d rather skip another recession, thanks.

… Letter: Do property deeds belong in the newspaper?

Agreed. I feel like printing deeds in the paper served a purpose in the past but is not necessary now.

Great article. I agree wholeheartedly with what was written.

It’s truly a shame the way they treated the mayor. So petulant and disrespectful.

It may have been a ploy to test the waters of what could be gotten away with. It is the council’s job to challenge expenditures, by either the mayor, city manager or any other official of a city. Good for them; they are doing their job.

I simply don’t know what was solved by bringing this up at the last council meeting. It only served to divide our city when it needs to be brought closer together to fight the real issues of Salisbury — crime, poverty, education. Now, council, let’s get on with the job you asked for and were elected to do, making Salisbury a better city for all.

Nothing was solved. A hidden or overlooked force designed to divide us was exposed. There are individuals and groups in our community who work to keep us at odds with each other. It’s the old divide-conquer-and-rule technique that’s been working before and since this country was established.

Absolutely awesome that this young man remains an active part of the community. Thank you, Chris Smith, for giving to the community in which it all started.

In other words, Trump supporters still like him because he keeps “whiteys” in the driver’s seat and the rest of us fighting for our freedoms. It is also hard to believe Trump supporters cannot see all of the corporate welfare is the bigger problem, not social welfare programs for the poor.

Pat, I guess it’s just going to be a rough six years and eight months for you. But take heart, because a lot of healthy young lay-abouts now are getting up off their behinds. Head ’em up! Move ’em out!

Albert was a great guy, and this award is well-deserved. I worked with him during my time with Piedmont Players, and he was always the professional, on and off the stage. Thank you for your service, Albert Stout.

The speed monitor suggested by Karen Alexander is something the city needs to purchase in large numbers. It is surely cheaper than a police officer sitting periodically to monitor speed on city streets — especially neighborhood streets.

I have requested the speed monitor on my street a number of times, but I have been successful in getting it one time. I feel this purchase should be more important than some of the other spending council approves.

I appreciated council members attending this meeting and caring about citizens’ concerns.

Being willing to go out in the community and hear from constituents shows extraordinary leadership, from council as well as staff.

… Letter: Trump has done plenty for our country

What a bunch of poppycock. Trump has done nothing. Obama saved the economy. Obama lowered the unemployment rate from 10.5 percent under GW to 4 percent. And, as far a Rasmussen poll, it’s a GOP-leaning poll. Trump’s approval is 40 percent or lower in the real polls

Keep up the good work. After eight years of MAGA, we will be back to where we were before … when the last great president left office in 1989!

… In the trenches: Code officer has seen a little bit of everything

An interesting look into a job most of us probably never consider. Thanks for sharing!

Myrtle Jean is truly an earth angel. If only more people could be like her.

… Other Voices: Shootings could hit home

I agree that there are things we can do to prevent gun violence. Sensible gun laws help keep everyone safer — children, teachers, staff, parents, neighborhoods, police, fire and other first responders. School shootings are preventable and fixable, but we have to act.

Please show support for the victims and survivors of gun violence by Wearing Orange on June 1, 2 and 3. I will be wearing orange in honor of A’yanna Allen, Mother Emanuel Church in Charleston, S.C., and Tennessee Valley UU Church in Knoxville, Tenn.

Who will you wear orange for?