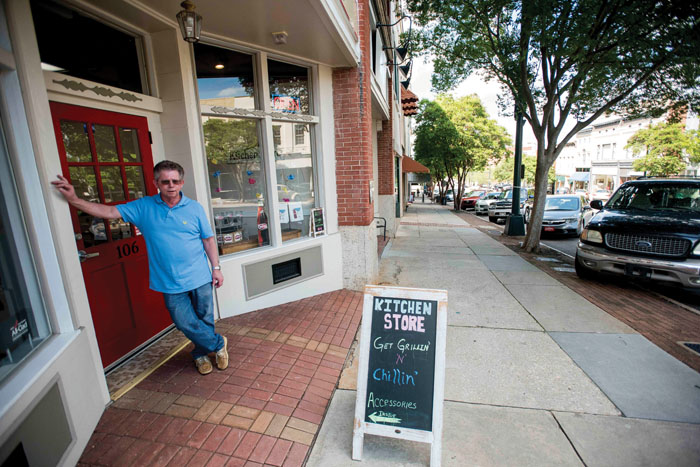 Kitchen Store owner Dennis Lunsford and several other downtown Salisbury businesses have banded together to jointly extend their normal hours of operations by one hour on Friday evenings to 7 p.m. Jon C. Lakey/Salisbury Post

But after DSI replaced the promotion with 11 larger events throughout the year, some merchants decided to bring the spirit of First Friday back to downtown themselves.

Pottery 101 owner Cheryl Goins said she got the idea to stay open until 7 p.m. every Friday from a pottery studio in Bakersfield.

“It has been in my head for a while,” Goins said. “So when we stopped the (First) Friday nights, I thought it would be a good time.”

Priscilla Clark of Priscilla’s heard about the effort from Lunsford, and Jeff Penfil of Stately Homes and Dileika Wilson of Timeless Wigs and Marvelous Things heard about it from Clark.

Goins said she was excited by the idea of having multiple businesses open late Fridays.

“Because if you go to Winston-Salem or Charlotte … what do you do while you’re waiting for your restaurant, your seats? You kind of go in the little shops,” Goins said. “So maybe not a bad thing to do. So we’re just kind of inching into it.”

Goins said she does not think what the businesses are doing would or should replace First Friday.

“There was more entertainment and things like that. That’s not what we’re offering. We’re just saying we’ll give you a glass of wine or beer and advertising it on Facebook and just being open later,” Goins said.

In all, six businesses are joining together to stay open until 7 p.m. and serve refreshments on Fridays — Pottery 101, South Main Books, Kitchen Store, Stately Homes, Priscilla’s, and Timeless Wigs and Marvelous Things.

Some other downtown businesses, such as Skinny Wheels Bike Shop, usually remain open until 7 p.m. on Fridays but don’t generally serve refreshments.

Clark and Penfil both cited concerns about losing First Friday as a reason for joining businesses in staying open later.

“We don’t really feel like we’re being supported,” Clark said.

Clark said she thinks some downtown businesses staying open later every Friday will be a “good thing for Salisbury.”

“It’s a nice thing to do before you go out for dinner or go to the plays or whatever you’re doing downtown,” Clark said.

Penfil said he thought it was a mistake for DSI to change its calendar.

“I didn’t always participate in them, but as of late I was, and I found that they were certainly worthwhile,” Penfil said.

Penfil said he thinks it is “vital” that downtown businesses support each other.

“How else could you survive?” Penfil asked.

Lunsford said he supports DSI’s decision to end First Friday and thinks of this as a merchant effort.

“You can’t depend on DSI to do everything. So the merchants need to get together, too, and do things on their own,” Lunsford said. “DSI can only do so much.”

Beeker said that since deciding to stay open later, she hasn’t seen much traffic after 6 p.m. on Fridays.

“But maybe they’ll get used to the idea,” Beeker said. “We’ll try whatever it takes to get people downtown.”

Wilson said Timeless Wigs and Marvelous Things has stayed open until 7 p.m. for the past few years because of a previous attempt by the merchants’ association to keep businesses open later.

“Sometimes I’ve found that I have customers who are needing something for the weekend or they’re just getting off of work and trying to get everything done. So me being open that extra hour helps,” Wilson said.

Wilson said that based on her experience with fellow merchants staying open later, consistency will be key.

“Because if we just do it once or twice and then try to gauge and then give up, then that time that that customer has the ability, ‘Oh, come on, the stores are open downtown,’ and only one or two stores are open, it doesn’t have the same impact,” Wilson said.

All the business owners interviewed said they plan to continue extended hours for the foreseeable future.

“If people are willing to come, I’m willing to stay open,” Clark said.

Timeless Wigs and Marvelous Things is at 121 W. Innes St.