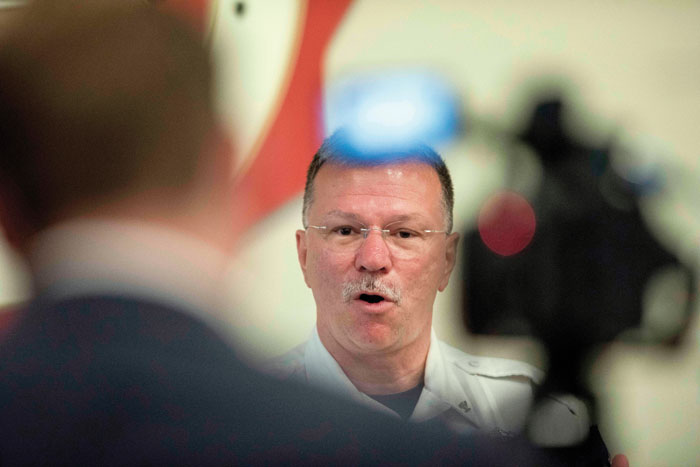 SALISBURY — A High Point man who robbed a Salisbury bank and was shot by a police officer after a high-speed chase has died of his wounds, the Salisbury Police Department said Friday.

Jerick Raheem Gray of High Point was identified as the man who robbed First National Bank on Thursday, then led police driving at speeds of up to 100 mph in a chase that ended in Thomasville, Police Chief Jerry Stokes said at a news conference.

Gray stabbed a man who tried to prevent him from entering a Thomasville hobby store, police said.

Gray, 42, was shot by a Salisbury police officer as law enforcement officers tried to take him into custody.

Gray walked into the bank at 322 E. Innes St., about 12:15 p.m. Thursday and demanded money. A teller complied, and Gray left in a small pickup traveling on Interstate 85 with an unidentified woman in the vehicle.

Gray refused to stop for officers who deployed stop sticks as they pursued him. The chase ended when Gray jumped out of his pickup and tried to run into Anderson RC Hobby Shop at 1101 Mendenhall St. in Thomasville.

Wes Anderson, who co-owns the hobby shop, tried to intercept Gray outside the store but was stabbed multiple times in the process. He is expected to make a full recovery as his injuries were not considered life-threatening.

Gray continued to try to get into the store as a customer and an owner struggled to keep the door shut. Stokes said veteran Salisbury police Officer Christopher Schenk shot Gray.

Schenk has been an officer with the Salisbury Police Department since 2007, holding the rank of master police officer. He began his career in patrol and spent time as a detective and as a member of the gang unit. He is currently assigned to patrol as a field training officer.

Schenk was employed by the Spencer Police Department before moving to Salisbury. He has been a police officer since 1991 with a total of 27 years of service, Stokes said.

Schenk continues on administrative leave as is customary after a use of force, Stokes said.

He said Gray was shot in the torso and died overnight Thursday.

It was unclear if the woman passenger in Gray’s pickup was an accomplice to the robbery or a victim of circumstances. Stokes said the investigation into her role is ongoing.

The woman was being treated for an unrelated medical condition. Stokes declined to release further inforomation.

Stokes said he expects the investigation into the shooting will take a considerable amount of time.

“We continue to work with the Thomasville Police Department and SBI and fully cooperate as they investigate the circumstances of the stabbing and officer-involved shooting. Salisbury detectives will continue to follow up on the bank robbery,” Stokes said.